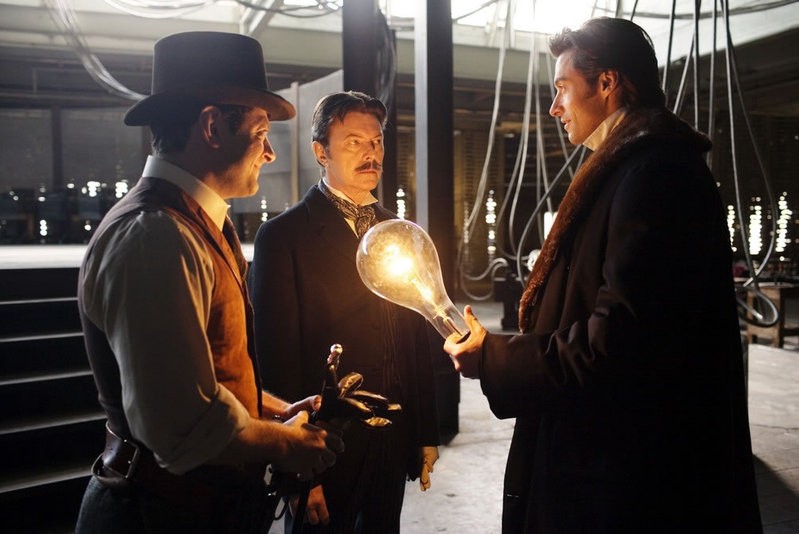 Prestige, The (film) Two young Victorian-era magicians in London, where magicians are idols and celebrities of the highest order, set out to carve their own paths to fame. The flashy, sophisticated Robert Angier is a consummate entertainer, while the rough-edged purist Alfred Borden is a creative genius who lacks the panache to showcase his magical ideas. They start out as admiring friends and partners. But when their biggest trick goes terribly awry, it sparks a powerful rivalry that builds into an escalating battle of tricks and an unquenchable thirst to uncover the other’s trade secrets. Trick by trick, show by show, and now enemies for life, their ferocious competition builds until it knows no bounds, even utilizing the fantastical new powers of electricity and the scientific brilliance of Nikola Tesla, while the lives of everyone around them hang in the balance. A Touchstone Pictures/Warner Bros./Newmarket Films production. Released on October 20, 2006. Directed by Christopher Nolan. Stars Hugh Jackman (Robert Angier), Christian Bale (Alfred Borden), Michael Caine (Cutter), Scarlett Johansson (Olivia Wenscombe), David Bowie (Tesla), Piper Perabo (Julia McCullough), Rebecca Hall (Sarah), Samantha Mahurin (Jess), Andy Serkis (Alley). 130 min. Filmed in CinemaScope. Based on the novel by Christopher Priest. Released on DVD in 2007.