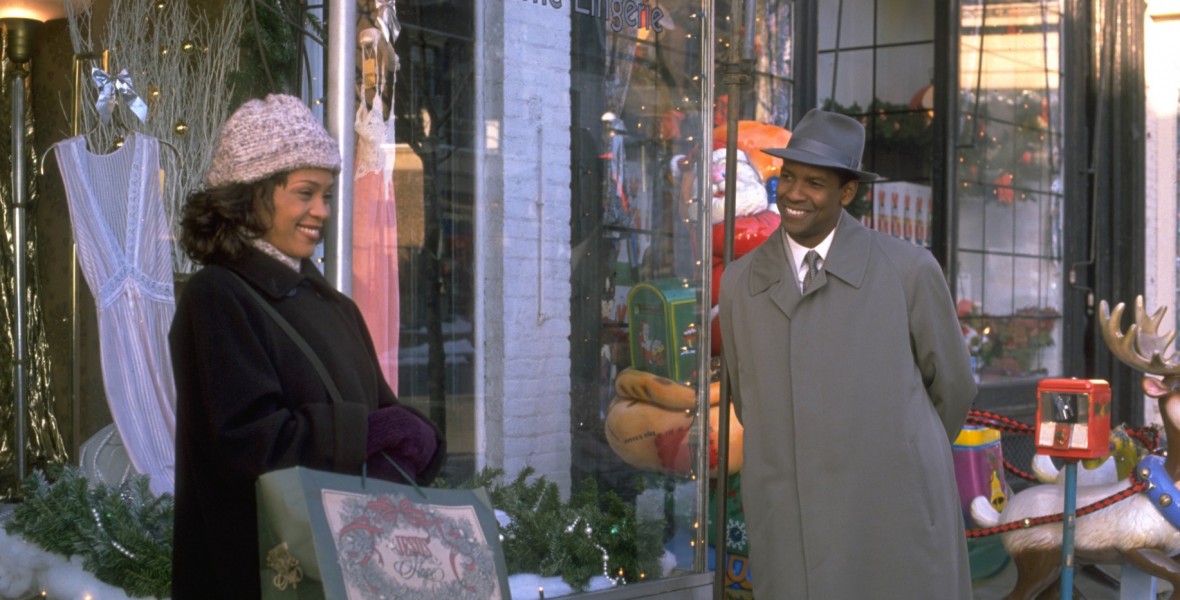 Preacher’s Wife, The (film)  A preacher, Henry Biggs, is having problems with his church, seeing its congregation declining while its debts are mounting, along with a general feeling of inadequacy that causes problems in his personal life.  When he asks for divine intervention, he and his gospel-singing wife, Julia, are visited by an angel, Dudley, and Dudley soon becomes both the source of and solution to their problems.  Directed by Penny Marshall.  A Touchstone Picture.  Released on December 13, 1996.  Stars Whitney Houston (Julia), Courtney B. Vance (Henry Biggs), Denzel Washington (Dudley), Gregory Hines (Joe Hamilton), Jenifer Lewis (Marguerite Coleman), Loretta Devine (Beverly), Lionel Richie (Britsloe).  124 min.  Whitney Houston’s mother, famed gospel singer, Cissy Houston, appeared as choir member Mrs. Havergal.  Doubling as the exterior of Rev. Biggs’ church, St. Matthew’s, was the Good Shepherd Presbyterian Church in the Nodine Hill District of Yonkers, New York.  The interiors were filmed at the Trinity United Methodist Church in Newark.  The church’s choir was made up of members of the Georgia Mass Choir, founded by Rev. Milton Biggham.  Other filming took place in Jersey City and Paterson, New Jersey; Portland, Maine (where the ice-skating sequence was filmed on a local pond); and New York City (with an abandoned jazz club in Greenwich Village providing the setting for Jazzie’s).  Based on The Bishop’s Wife (RKO, 1947).  When Walt Disney and his wife saw that film shortly after its opening, he wrote a warm letter of praise to the producer, Samuel Goldwyn, noting that the movie was in “excellent taste and interspersed with superb light, humorous touches” leaving you with “a very good feeling.”  Released on video in 1997.

Pre-Opening Report from Disneyland, A Predators of the Desert (film)