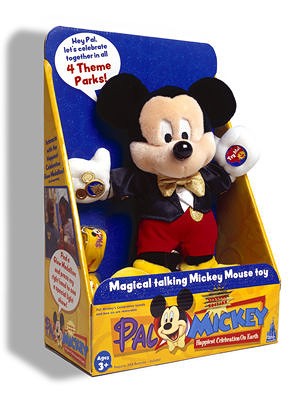 Pal Mickey Interactive Mickey Mouse doll that acts as a tour guide, sharing park tips, fun facts, and jokes, and playing three different games, available for rental or purchase at Walt Disney World in April 2003. A Spanish version was introduced on October 5, 2003. Due to guest preference, while the Mickeys continued to be sold, the rental program ended on December 1, 2004. A new enhanced version of Pal Mickey was released in May 2005 for the Happiest Celebration on Earth. Sales of Pal Mickey ended in 2008 as existing stock ran out, but the interactive plush continued to operate in the four parks.