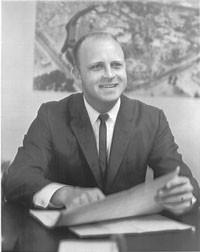 Nunis, Dick He began his Disney career in the summer of 1955 at Disneyland as an assistant to Van France in orientation training. He worked up through the ranks as area supervisor, supervisor of the mailroom and steno pool, director of Disneyland operations (1961), and vice president of Disneyland operations (1968). In 1972 he became executive vice president of both Disneyland and Walt Disney World, and president in 1980. He was a member of the Disney board of directors from 1981 to 1999, and was named chairman of Walt Disney Attractions in 1991. He retired in 1999, and was named a Disney Legend the same year.