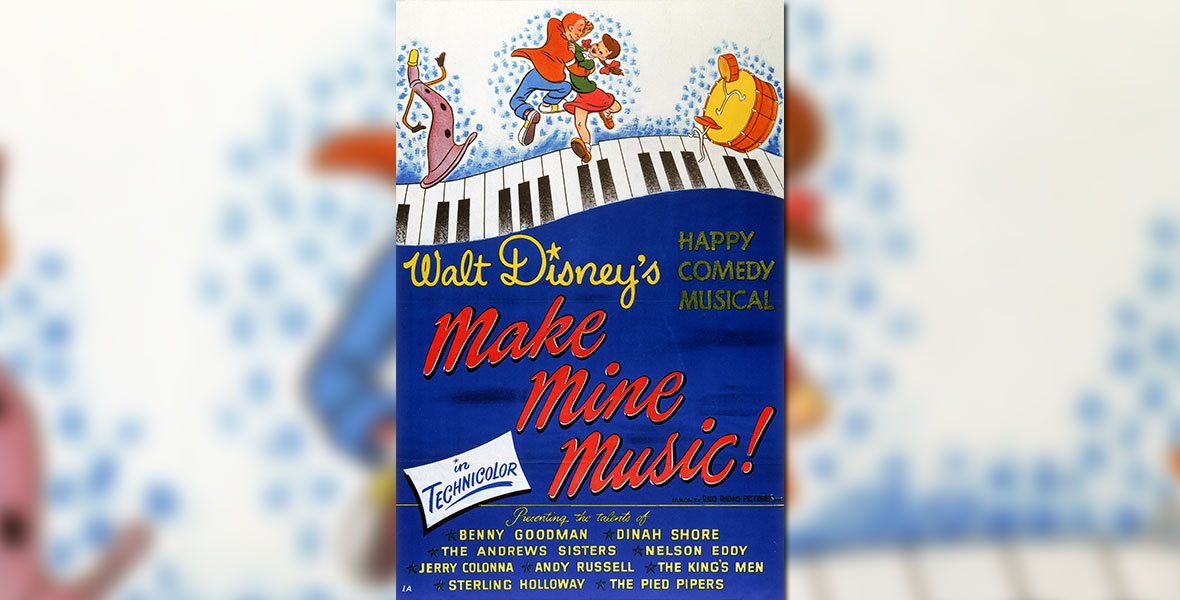 Make Mine Music (film) Ten shorts are combined in a tuneful compilation. Disney’s first postwar “package” picture, produced because financial problems prevented Walt Disney from finding enough money to create a full animated feature. By tying a group of shorts together, he was able to get the production into theaters sooner. Premiered in New York on April 20, 1946; general release on August 15, 1946. Production supervisor was Joe Grant; directors were Jack Kinney, Clyde Geronimi, Hamilton Luske, Robert Cormack, and Joshua Meador. 75 min. Theater program titles are animated to announce the title of the subject that follows. The segments are: (1) The Martins and the Coys, which deals with two feuding families who shoot and kill off each other except for Henry Coy and Grace Martin, who fall in love, but continue fighting after marriage (sung by The King’s Men); (2) Blue Bayou, originally created for Fantasia to accompany “Clair de Lune, ” this short, sung by the Ken Darby Chorus, follows a majestic crane who lands in a bayou, then rises again to join another in the moonlit sky; (3) All the Cats Join In, with Benny Goodman and his Orchestra playing while animated teenagers go out and dance at a malt shop; (4) Without You, in which Andy Russell sings a “Ballad in Blue” as a petal falls, changing to a tear; light reveals a love letter containing lyrics of the song, and rain washes paintings onto a window illustrating the lyrics; (5) Casey at the Bat, with Jerry Colonna reciting the sad story of Mighty Casey, a baseball player who loses his touch and can no longer hit the ball; (6) Two Silhouettes, with Dinah Shore singing as two figures dance in ballet, the boy meeting, losing, and finding the girl theme (live action dancing was performed by Tania Riabouchinska and David Lichine); (7) Peter and the Wolf, told by Sterling Holloway, with Peter going with a duck, cat, and bird to catch a wolf; (8) After You’ve Gone, with the Benny Goodman Quartet and a musical cartoon fantasy of personalized instruments; (9) Johnny Fedora and Alice Bluebonnet, sung by the Andrews Sisters, illustrating the romance between boy and girl hats; and (10) The Whale Who Wanted to Sing at the Met, Nelson Eddy tells the story and sings the songs about a whale who is found singing grand opera with a beautiful voice; a dream sequence shows the whale at the Met as a sensation but the return to reality shows him being harpooned because it is believed he swallowed an opera singer. The film was never theatrically reissued. Many of the individual segments would later be used on television or released theatrically as shorts. Released on video in 2000 minus The Martins and the Coys.