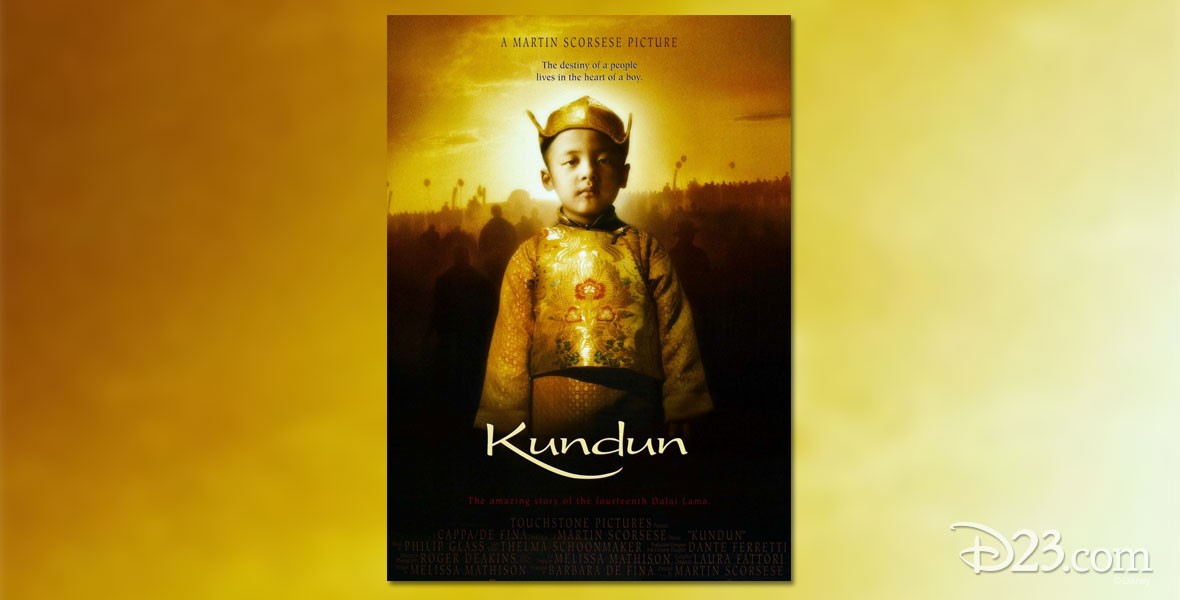 Kundun (film)  In 1937 a two-and-a-half-year-old boy, Tenzin Gyatso, from a simple family in rural Tibet was recognized as the 14th reincarnation of the Buddha of love and compassion, and destined to become the spiritual and political leader of his country.  Told through the eyes of the Dalai Lama, the movie chronicles his early life, from childhood through the Chinese invasion in 1950 and his journey into exile in 1959.  A Touchstone Picture.  Released exclusively in New York and Los Angeles on December 25, 1997, and expanded to more theaters on January 16, 1998.  Directed by Martin Scorsese.  Stars Tenzin Thuthob Tsarong (Dalai Lama as adult), Gyurme Tethong (Dalai Lama age 12), Tenzin Chodon Gyalpo (mother).  135 min.  Filmed in CinemaScope.  Screenwriter Melissa Mathison based her script on research plus fifteen interviews with the Dalai Lama himself.  The title of the film means “great compassionate teacher.”  Actors for the film were found among Tibetans living in India, the United States, and Canada; while none were professional actors, several were members of the Tibetan Institute of Performing Arts.  Since it was not possible to film in Tibet or India, the home of the exiled Tibetan government, the company decided to film in Morocco, which has a high desert and mountains as needed to approximate Tibet.  Production base was at the Atlas Studios outside of Ouarzazate.  The release of the film caused political repercussions because the Chinese government was not pleased with it and several other Hollywood films that they felt aided an independence movement and glorified the Tibetans whose homeland, the Chinese insist, has always been part of China.