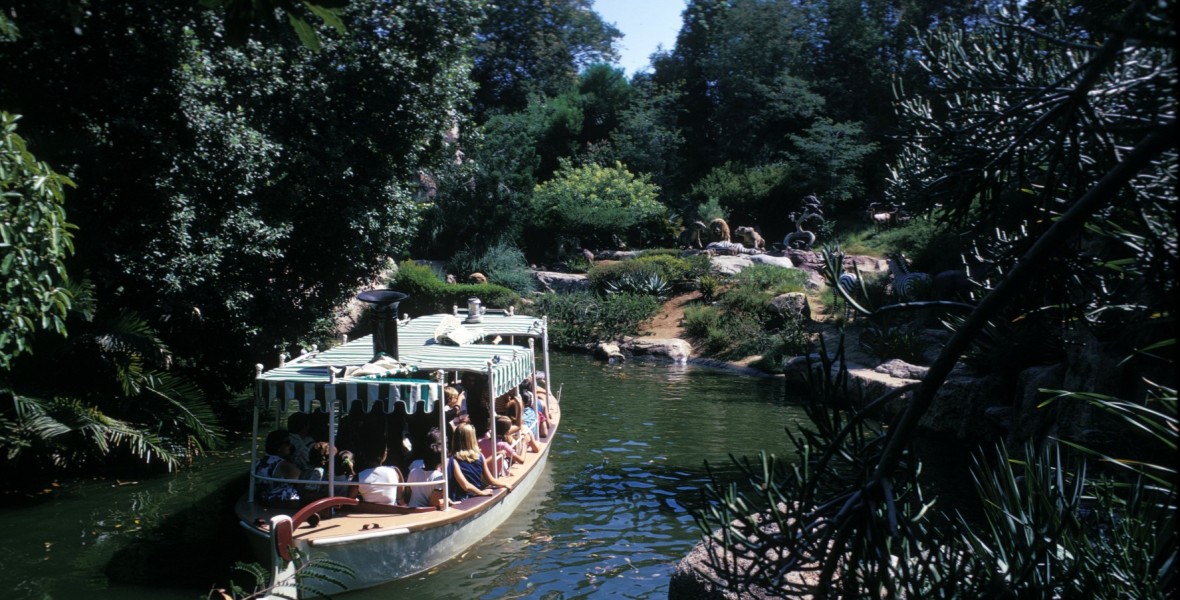 Jungle Cruise Adventureland attraction at Disneyland, opened on July 17, 1955. One of the most eagerly awaited attractions because of extensive publicity given by Walt Disney on pre-opening television shows. Very little else was far enough along for him to show, but the channel was dug for the Jungle Cruise, trees were being planted, and Walt was able to talk his viewers through a typical ride, and eventually drive them through in his Nash Rambler (one of the television show’s sponsors). The attraction was expanded in 1962 (bathing pool of the Indian elephants), with more additions in 1964 (trapped safari, African veldt region) and 1976 (7 new scenes and 31 figures). A new two-story queue building was added in June 1994, and the channel was moved slightly to allow space for the queue area for the new Indiana Jones attraction, which opened in 1995. Also, Adventureland attraction in Magic Kingdom Park at Walt Disney World, opened October 1, 1971, in Tokyo Disneyland, opened April 15, 1983, and in Hong Kong Disneyland (known as Jungle River Cruise), opened September 12, 2005. A Jungle Cruise was not built at Disneyland Paris because after the popularity of the Disneyland attraction, a number of European parks had already copied the concept, and to build one at Disneyland Paris would not have provided anything new to European visitors. In 2013, the attraction received a temporary holiday makeover at both Disneyland and the Magic Kingdom at Walt Disney World, with renamed boats, decorations, and spiel changes. The name of the Tokyo Disneyland attraction was changed to Jungle Cruise: Wildlife Expeditions on September 8, 2014; it features new lighting and special effects, and original music.