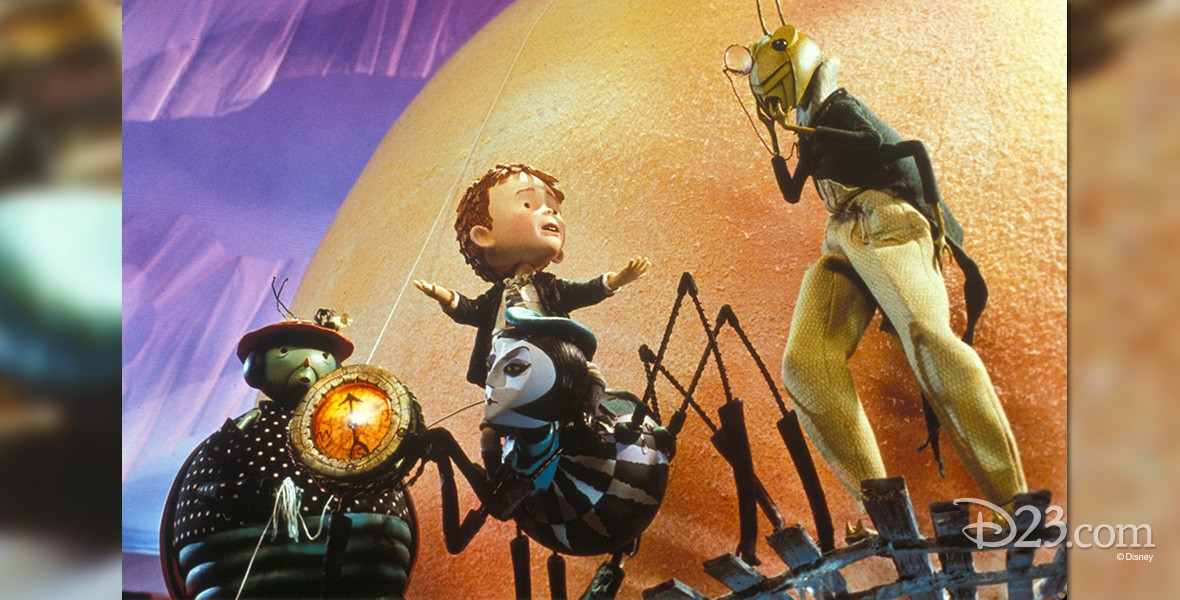 James and the Giant Peach (film)  Nine-year-old James Henry Trotter, a young orphan, has been sent to live with his wicked, miserly aunts Spiker and Sponge. Life is the pits for the lonely boy, who dreams of going to New York City. He finally gets his chance when he meets a mysterious hobo who presents him with a bag of magical “crocodile tongues.” Accidentally spilling his precious treasure at the base of a peach tree, James is astonished to see a peach on the tree grow to an enormous size. Finding a secret entryway into the peach, he crawls inside where he meets a wondrous group of human-sized insects–including a brash centipede, a grandfatherly grasshopper, a motherly ladybug, and a dotty glowworm. When the peach breaks loose from the tree, James and his insect pals find themselves on a roll, headed for the adventure of a lifetime. Directed by Henry Selick. Released on April 12, 1996.  Stars Miriam Margolyes (Sponge, Glowworm), Joanna Lumley (Spiker), Paul Terry (James), Pete Postlethwaite (old man), and the voices of Richard Dreyfuss (Centipede), Susan Sarandon (Miss Spider), Jane Leeves (Lady Bug), David Thewlis (Earthworm), Simon Callow (Grasshopper).  79 min.  Based on the 1961 book by Roald Dahl.  Five songs were written by Randy Newman:  “My Name Is James,” “That’s the Life, ” “Eating the Peach,” “We’re Family, ” and “Good News.”  Newman himself is the vocalist on the last song.  The fantasy scenes were filmed using stop-motion animation enhanced by computer-generated imagery and digital effects. Live-action photography took place in a large hangar at a decommissioned naval base on Treasure Island in San Francisco Bay and at nearby Hunter’s Point.  The animation was done at Skellington Productions in San Francisco, the same studio where The Nightmare Before Christmas had been produced, and it utilized some of the same crew. In the underwater sequence, one can even find a cameo appearance by Jack Skellington from the earlier film. More than 50 peaches were constructed for the film, ranging in size from three-inch miniatures up to 20-foot diameter jumbos. Two granddaughters of Roald Dahl, children of his daughter, Lucy, appear briefly as extras in the film. Lucy wrote the movie scrapbook, published by Disney Press and illustrated with her own photographs. Released on video in 1996.