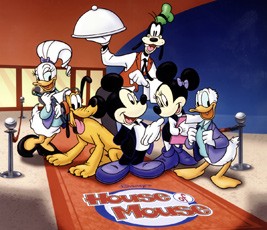 House of Mouse (television) Animated characters gather each Saturday at this “nightclub” to enjoy musical guests, cartoon shorts, and Mickey Mouse’s comical introductions from the stage. There is constant backstage pandemonium as Mickey, Donald Duck, Goofy, Minnie Mouse, Daisy Duck, and Pluto attempt to ensure that “the show goes on.” Premiered on ABC on January 13, 2001. The last new episodes were produced in 2003 and the series ended in February 2009. 52 episodes.

House of Magic House of the Future