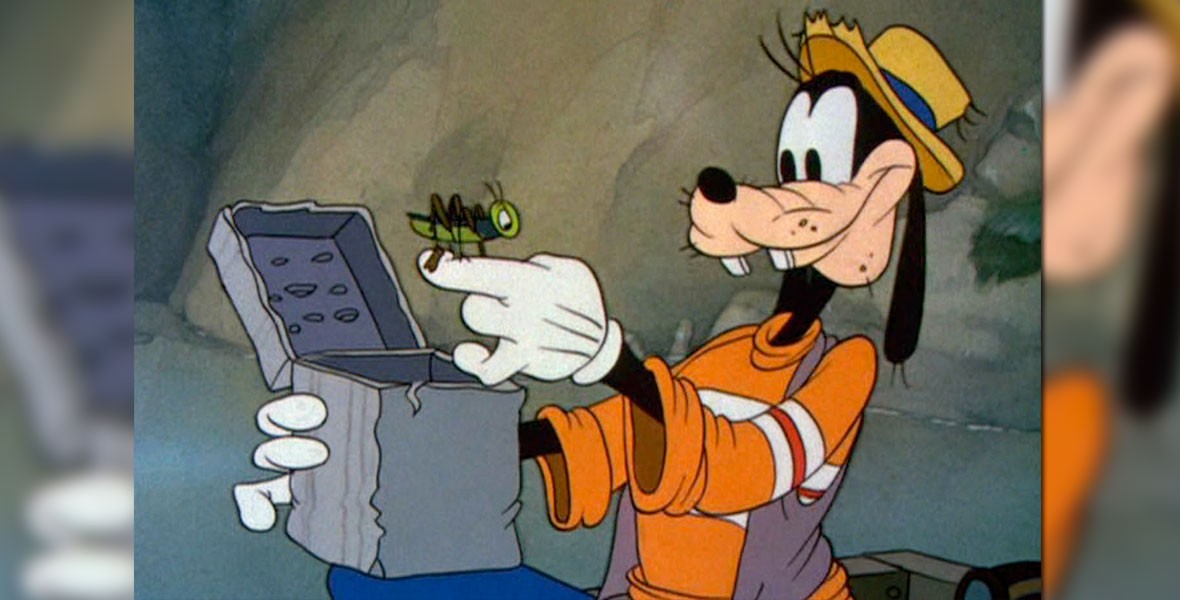 Goofy Good-natured but stupid, the cartoon character made his first appearance, somewhat disguised, as a member of the audience in Mickey’s Revue (1932). What distinguished Goofy from those sitting around him was not so much his appearance but his raucous laugh. That laugh, supplied by Disney storyman, musician, and former circus clown, Pinto Colvig, created such an impression on Walt Disney and his staff that the character soon began to be featured in other cartoons. Before long, Goofy was part of the gang that included Mickey, Minnie, Pluto, Clarabelle Cow, and Horace Horsecollar. This new character was first given a name, Dippy Dawg, in the newspaper comic strips. A 1938 book indicated the first change to Dippy’s name, The Story of Dippy the Goof, and by 1939 the final change was made with the release of the cartoon Goofy and Wilbur. Goofy was created as a human character, as opposed to Pluto, so he walked upright and had a speaking voice (first supplied by Colvig, and later by George Johnson, Bob Jackman, and Bill Farmer). There were 49 Goofy cartoons (primarily in the 1940s and 1950s), but he also appeared in many cartoons with Mickey Mouse and Donald Duck. He was best known for his series of “How toâ€ cartoons, where he bumbled through the explanations. In the 1950s, he appeared in several cartoons as Mr. Geef, with a wife and son. The 1990s television series, Goof Troop, reintroduced Goofy and son, but by this time the son was Max, quite different from his earlier incarnation, and the wife was no longer on the scene. After a gap of many years, a new Goofy cartoon, How to Hook up Your Home Theater, was made in 2007 during his 75th anniversary.

The 49 Goofy cartoons are as follows:

Goofing Around with Donald Duck Goofy Adventure Story, The