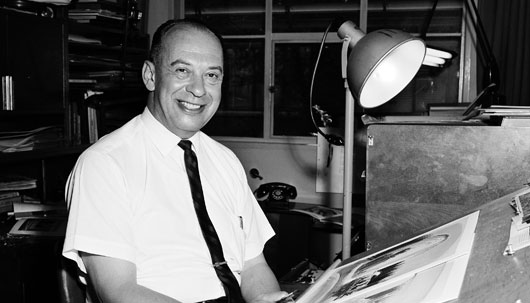 Davis, Marc (1913-2000) Animator/designer; known as one of Disney’s “Nine Old Men,” he began his career at the Studio in December 1935, working on Snow White and the Seven Dwarfs. He developed such memorable characters as young Bambi and Thumper, and gained a reputation for animating such distinctive female characters as Cinderella, Tinker Bell, and Cruella De Vil, among others. In addition, he played an active role in the planning of Disneyland and all four of Disney’s 1964-1965 New York World’s Fair attractions. He developed story and character concepts for many Disneyland attractions, including Pirates of the Caribbean, the Haunted Mansion, “it’s a small world,” and later consulted on attractions for Epcot and Tokyo Disneyland after his retirement in 1978. He was honored with the Disney Legend award in 1989.