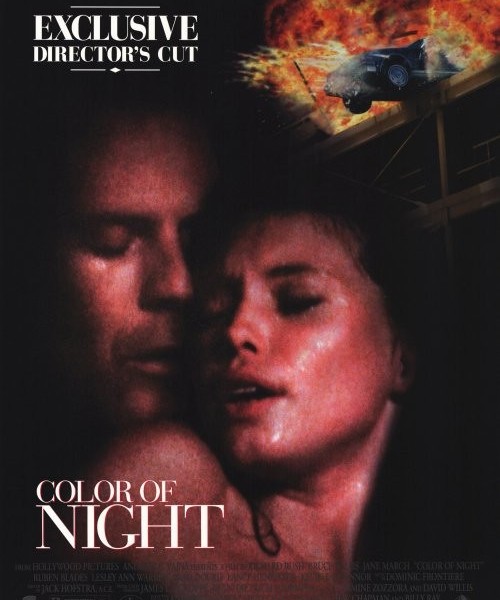 Color of Night (film) Haunted by the bizarre suicide of a patient, New York psychologist Dr. Bill Capa abandons his successful practice and relocates to Los Angeles. He soon finds himself entangled in an explosive sexual relationship with a beautiful but enigmatic woman named Rose, and the investigation into the brutal murder of a friend and colleague, Dr. Bob Moore. After he is persuaded by a police detective to take over his friend’s counselling sessions, he is shocked to discover that the fanatic murderer, probably one of the group, is now stalking him. Released on August 19, 1994. Directed by Richard Rush. A Hollywood Pictures film, in association with Cinergi Pictures. 123 min. Stars Bruce Willis (Bill Capa), Jane March (Rose), Rubén Blades (Martinez), Lesley Ann Warren (Sondra), Brad Dourif (Clark), Lance Henriksen (Buck), Kevin J. O’Connor (Casey). Filmed at a variety of locations in Los Angeles, California, and at the Ren Mar Studios in New York. The director’s cut was released on video in 1995.

Color of Money, The (film) Colors of the Wind