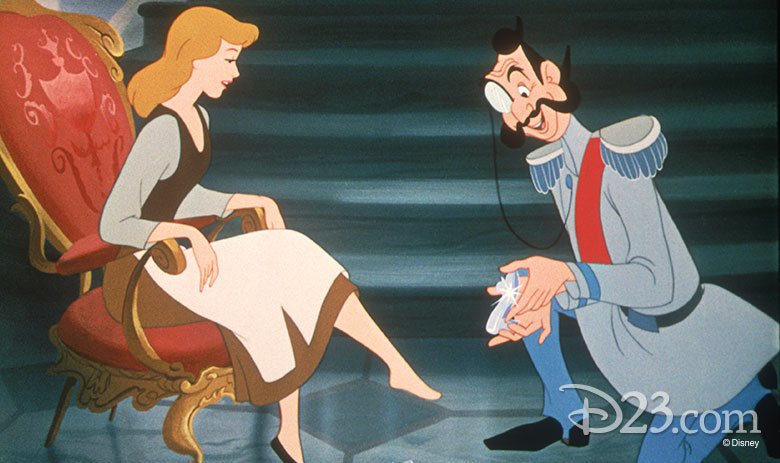 Cinderella (film) Animated feature; the famous rags-to-riches tale of a beautiful girl reduced to being a servant by her jealous Stepmother and Stepsisters, Anastasia and Drizella. With the help of a bit of magic by her Fairy Godmother, Cinderella is given a beautiful dress and use of a magnificent coach, and is able to attend a royal ball and inadvertently fall in love with the prince. Fleeing the ball at midnight, the hour when the magic spell is due to end, she leaves behind a glass slipper that the prince and Grand Duke use to search her out. With the help of her little mice and bird friends, she is discovered and assured a happy future.   Cinderella was voiced by Ilene Woods, with Eleanor Audley voicing the Stepmother and Verna Felton the Fairy Godmother. Mike Douglas is the uncredited singing voice of Prince Charming. Released on February 15, 1950. Directed by Wilfred Jackson, Hamilton Luske, and Clyde Geronimi. 74 min. Songs include “A Dream Is a Wish Your Heart Makes,” “The Work Song,” “So This Is Love,” and “Bibbidi-Bobbidi-Boo,” all by Mack David, Jerry Livingston, and Al Hoffman, with “Bibbidi-Bobbidi-Boo” nominated for the Academy Award for Best Song. The film also received a nomination for Best Scoring of Musical Picture. During its original release, the public made the film one of the highest grossing films of the year, and Disney’s most successful release since Bambi. Because of wartime economic problems, the Disney Studio had had to be satisfied with its “package films” such as Make Mine Music and Melody Time for several years, but by the end of the 1940s, Walt Disney was able to put together the financing for another full feature telling a single story. It was a gamble for Disney, and if it had been unsuccessful, it probably would have sounded the death knell for animation at the Studio. But its resounding success ensured that animation would continue. Cinderella was re-released in theaters in 1957, 1965, 1973, 1981, and 1987. Released on video in 1988 and 1995.