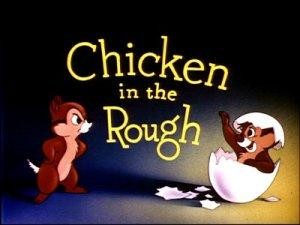 Chicken in the Rough (film) Chip ‘n’ Dale cartoon; released on January 19, 1951. Directed by Jack Hannah. Chip and Dale, picking acorns, come across a nest of eggs. A baby chick hatches from one of the eggs and Dale, in trying to stuff the chick back into the egg, gets involved with the rooster and ends up trapped under the hen with the rooster pacing outside.