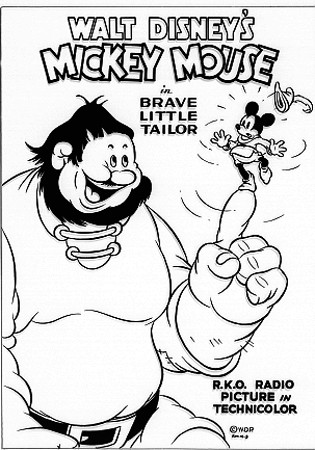 Brave Little Tailor (film) Mickey Mouse cartoon; released on September 23, 1938. Directed by Bill Roberts. In a medieval setting, when tailor, Mickey, gleefully exclaims that he killed “seven with one blow,” meaning flies that had been bothering him, the people in the medieval town, who had been talking about giants, assume him to be a gallant giant-killer and take him to the king. The king appoints Mickey to destroy a nearby giant, with the prize being a treasure of golden pazoozas and the hand of the fair Princess Minnie. Using his brain to outwit the giant’s brawn, Mickey defeats the hulking figure and becomes a hero. One of the most elaborate, and expensive, Mickey Mouse cartoons ever made. Its extremely high cost forced Walt to take a closer look at budgets for later cartoons. Nominated for an Academy Award.