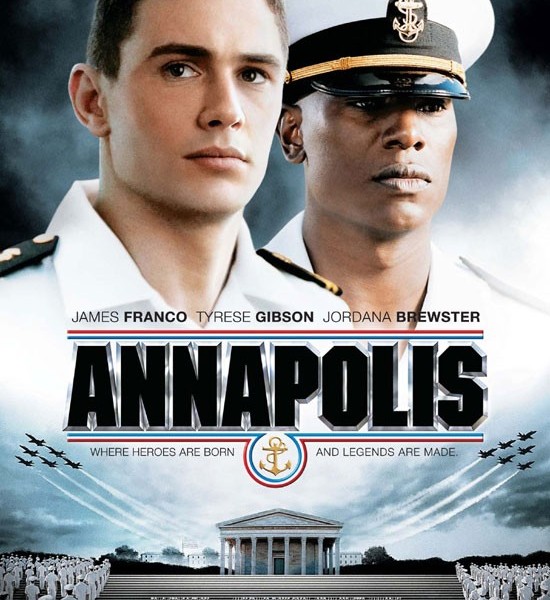 Annapolis (film) After winning admission to the Naval Academy at Annapolis, Jake Huard wonders if a regular kid from a poor blue-collar family can fit into the Academy’s pressure-cooker atmosphere. Barely making the grade as a plebe, Jake has one last shot at proving he has what it takes to become an officer—he decides to enter the notoriously fierce Navy boxing competition known as the Brigade Championships, and face off against his archnemesis, Midshipman Lt. Cole. Everything Jake has ever hoped for stands in the balance: the chance to make his father proud, validate his lieutenant’s faith in him, stand up for his fellow plebes, and, most of all, forge a different future. A Touchstone Picture. Directed by Justin Lin. Stars James Franco (Jake Huard), Tyrese Gibson (Cole), Jordana Brewster (Ali), Donnie Wahlberg  (Burton), Chi McBride (McNally), Vicellous Reon Shannon (Twins), Wilmer Calderon (Estrada), Roger Fan (Loo), McCaleb Burnett (Whitaker). 104 min. Filmed in Pennsylvania, with Philadelphia’s Girard College standing in for Annapolis.