Home / Disney A to Z / A / Alley Cats Strike (television) 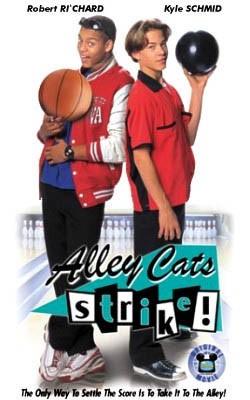 Alley Cats Strike (television) Disney Channel Original Movie; premiered on March 18, 2000. Four hip teens are content with their non-conformist attitudes, retro styles of dress, and an interest in bowling and lounge music that have made them outcasts among their classmates at West Appleton Middle School. But when an annual interschool competition ends in a tie, the school has to turn to bowling to break it, and suddenly the four teens are thrust into the spotlight, with the most popular and athletic kid in school, who has never bowled, added to their team. The teens must set aside their differences and learn to work together. Directed by Rod Daniel. Stars Kyle Schmid (Alex Thompson), Robert Ri’chard (Todd McLemore), Kaley Cuoco (Elisa), Mimi Paley (Delia), Joey Wilcots (Ken).