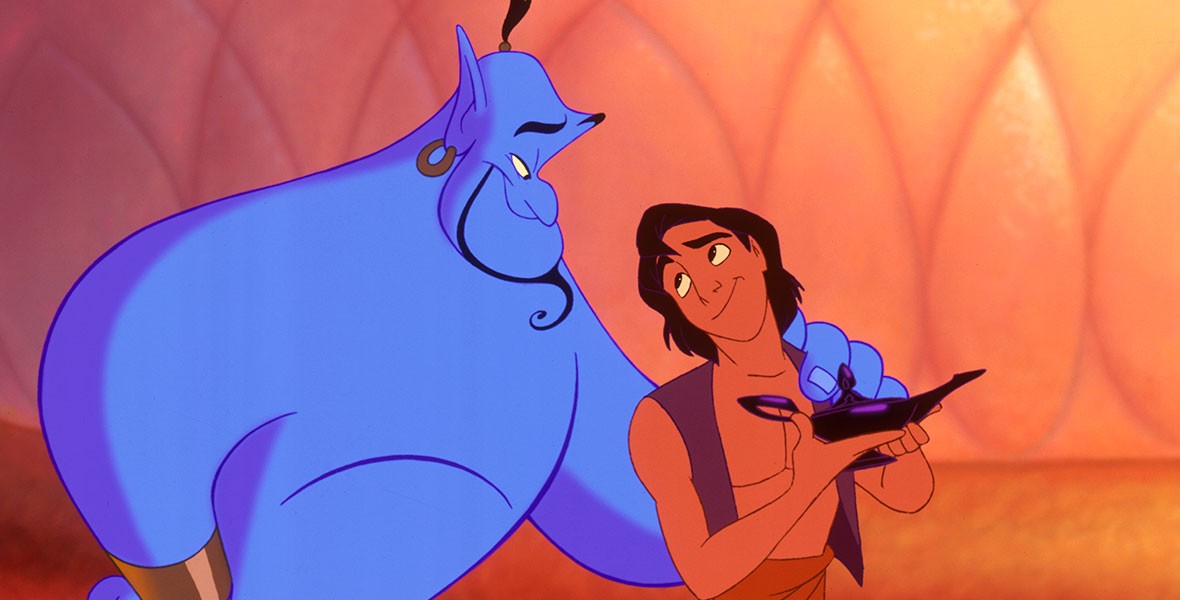 Aladdin (film) Animated feature about a street-smart young thief in the mythical city of Agrabah who meets and falls in love with the Sultan’s beautiful daughter, Jasmine, a liberated young lady who seeks to escape her present lifestyle. Help comes when the evil vizier, Jafar, plots to get a magic lamp for his own rise to power, and decides he needs Aladdin, a true “diamond in the rough,” to seek the lamp in the Cave of Wonders. Aladdin and his friend, the monkey Abu, gain the lamp and the wise-cracking Genie inside for themselves. The Genie changes Aladdin into a prince so he can woo the princess, but the deception fails to impress Jasmine. As his true self, however, he uses his cunning and courage, with the help of the Genie, to defeat Jafar and his evil plans, in the end earning a princely title and the princess. Initial release on November 11, 1992; general release on November 25, 1992. Directed by John Musker and Ron Clements. 90 min. Aladdin has a speaking voice provided by Scott Weinger and a singing voice by Brad Kane. Other voices are Robin Williams (Genie), Jonathan Freeman (Jafar), Linda Larkin (Jasmine speaking), Lea Salonga (Jasmine singing), and Gilbert Gottfried (Iago). The idea of adapting the Aladdin story as a Disney animated musical was first proposed by Howard Ashman in 1988 when he and Alan Menken were still working on The Little Mermaid. He wrote an initial treatment and collaborated on six songs with Menken, including “Arabian Nights,” “Friend Like Me,” and “Prince Ali.” After Ashman’s death in 1991, Tim Rice came on board to write some additional songs, notably “One Jump Ahead” and “A Whole New World.” The art directors were influenced by Persian miniatures and Arabian calligraphy. Supervising animator Eric Goldberg, who created the Genie, was the first animator to work on the project. He was heavily influenced by the curved, fluid caricature style of artist Al Hirschfeld. Computer-generated imagery enabled the filmmakers to create the amazing magic carpet ride through the Cave of Wonders, the intricately-patterned carpet itself, and the stunning tiger head cave. The film won Academy Awards for Best Song (“A Whole New World”) and Best Original Score. The film became the highest grossing animated film to date, earning over $200 million domestically. The video release in 1993 also set records. There were two made-for-video sequels–The Return of Jafar and Aladdin and the King of Thieves.