Are you prepared for two minutes and 30 seconds of action, adventure, big laughs, some totally rad Fleetwood Mac tunage, and the cutest little baby tree you’ve ever seen? During last night’s Jimmy Kimmel Live on ABC, Chris Pratt—Peter Quill/Star-Lord himself—surprised the audience (and everyone at home) with a very special treat: the brand-new trailer for Marvel Studios’ Guardians of the Galaxy Vol. 2. Do yourselves a huge favor and check it out, above… plus, it’s worth a second viewing even if you already caught it during Kimmel last night!

Also starring Zoe Saldana as Gamora, Bradley Cooper as Rocket, Dave Bautista as Drax, Karen Gillan as Nebula, Michael Rooker as Yondu, and Vin Diesel as Baby Groot—not to mention Kurt Russell as Peter’s long-lost father—Guardians of the Galaxy Vol. 2 blasts into theaters on May 5.

Cars 3 Extended Look: Get Ready for the “Next Generation”

We won’t get to catch back up with Lightning McQueen (voice of Owen Wilson) for a few months yet, but viewers of this past weekend’s big Daytona 500—and now you, here, via the clip above—can get an extended sneak peek at what’s in store from Disney•Pixar’s Cars 3, crossing the finish line into theaters this summer. Take a gander at the clip, above, for all the fast-paced racetrack action…

Blindsided by a new generation of racers, the legendary Lightning McQueen is suddenly pushed out of the sport he loves. To get back in the game, he’ll need the help of an eager young race technician, Cruz Ramirez (voice of Cristela Alonzo), with her own plan to win… plus inspiration from the late Fabulous Hudson Hornet, and a few unexpected turns. Proving that No. 95 isn’t through yet will test the heart of a champion on Piston Cup Racing’s biggest stage. Look for Cars 3, directed by Brian Fee (storyboard artist for both Cars and Cars 2) on June 16.

James Cameron Welcomes You to Pandora – The World of Avatar

Did you catch this special sneak at the newest land at Walt Disney World Resort during this past Sunday’s Oscar® telecast on ABC? If so, don’t fret: We’ve got it right here, above, for your viewing pleasure…

Featuring AVATAR director James Cameron, the 30-second clip offers some never-before-seen views of the land, located inside Disney’s Animal Kingdom. We literally cannot wait to “dream with our eyes open” by riding a Banshee on Avatar Flight of Passage, or taking in the unbelievably beautiful and bioluminescent sights on the Na’vi River Journey. Make sure to add Pandora – The World of Avatar to your adventure itinerary when it opens on May 27!

Give Five “Hurrahs!”—New Beauty and the Beast Clip Featuring “Gaston”

As we waltz ever closer to the debut of Disney’s live-action retelling of Beauty and the Beast, we’ve been gifted with yet another “first look” at one of the film’s big musical numbers… namely, the tavern tune “Gaston”! Featuring Luke Evans as the “pure paragon” of the title, and Josh Gad as his insanely hilarious sidekick LeFou, the number highlights the clever lyrics of the late Howard Ashman and the memorable music from Disney Legend Alan Menken…

But wait, there’s more: A new TV spot for Beauty and the Beast debuted during Sunday’s Oscars® telecast. Take a look, above… and set your clocks for the film’s March 17 debut. (We’ve been purchasing all the “grey stuff” we can find in anticipation!) 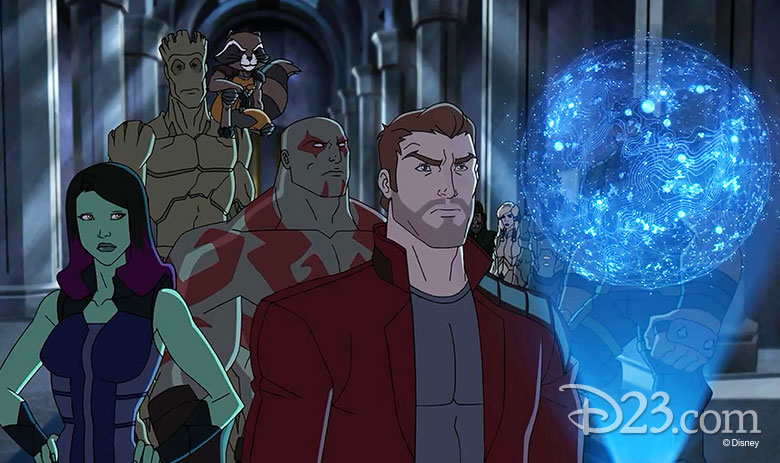 Season Two of Marvel’s Guardians of the Galaxy follows along as Star-Lord, Gamora, Drax, Rocket, and Groot set off on a mission to protect Star-Lord’s home planet of Earth. And wouldn’t you know it, they manage to cross paths with “Earth’s Mightiest Heroes,” the Avengers! After a truly epic battle, the two teams come together to save Earth from an alien mad scientist, The High Evolutionary, but inadvertently unleash an ancient weapon. With every alien baddie in the galaxy after this weapon, the Guardians must unlock its secrets before it destroys them and everything they’ve sworn to protect. Fire up those Walkmans and mark those calendars!