The whacky, whimsical, sympathetic characters in the new animated film Ron’s Gone Wrong all seem to be trying to find their place in the world as best they can—through work, through online celebrity, or through their B*Bots, aka their “best friends out of a box.” What they soon learn, though, is that fitting in takes a lot of hard work, and sometimes your best friends might not be the ones who need to be plugged in… or do they? The concepts of friendship, family, connectedness, and finding out what really matters in life are burrowed deep into the DNA of the new film from 20th Century Studios and British studio Locksmith Animation.

Recently, the stars of the film zoomed together to discuss their characters.

Jack Dylan Grazer, who voices the lead character of Barney, has been working on Ron’s Gone Wrong for over five years. “I started… back in 2017. I was 13 and I’m 18 now, so it’s been a while,” he said. “But it’s been a whirlwind of a process and there’s so much evolution that has happened, especially with Barney and the story as a whole. I remember the [original] script, and there were so many different people, it was a whole other ballgame when I started. But I’m so glad that I stuck around and here we are now, and I’m so thrilled.”

Voicing the other lead character, Ron, is Zach Galifianakis. “I think that that was a joint effort, to find that voice,” he said about developing the distinctive voice and tone for Ron. “Sometimes I would be too emotional, I think, and then I would get feedback from the booth like, ‘That’s too… we’re hearing a little crack of emotion there.’ And I thought, ‘God, I think I’m doing this wrong.’ I saw the buyer’s remorse in [writer and director] Sarah [Smith]’s face. But I think honestly, it was a little tricky just to find it because you don’t want to do a robot [he mimics a monotone robot-style voice]. Obviously, they didn’t want that. They wanted more of my voice. But then how do you walk that line of not too much emotion, but likeable or lovable? So, I had a lot of help, really, because I needed it.”

He continued: “Also, it’s a tone thing, too. In an animated thing, there’s a lot of it. There’s a lot of imagination that’s required in the beginning, because you don’t see a lot of visual stuff quite at the beginning. You’ve been told what’s happening and that’s a little bit of it. Sometimes it’s a little challenge, but honestly, I had help and they were very patient with me, which, when you don’t know what you’re doing like me, it’s helpful.”

Ed Helms, who voices Graham, Barney’s dad, addressed the question of how he was able to work “physical comedy” into his voice work with the character. “That’s a really interesting question,” he pondered, before quipping, “The short answer is that I did none of it… it was all the talented directors and animators who did all the physical comedy. My more nuanced answer, though, is that as a brilliant voice actor I’m able to infuse little nuggets of physicality. No, it’s really all there on the page. It’s really fun to just bring these lines to life, and these guys [filmmakers] can tell you that I don’t hold back in the [sound recording] booth. I’m definitely physical in the space and think that helps it sound right, and helps it sound physical and gets me there mentally.”

Kylie Cantrall voices popular girl Savannah, whose B*Bot helps to make her famous online… although things quickly get out of hand. “Savannah, you know, she’s your classic popular girl in school and from the outside,” she said, “and I think she seems like she has it all together.”

Cantrall went on to discuss the challenges and pitfalls of relying too much social media: “Social media is a huge part of this film and she’s taking these cute selfies and she’s doing these makeup tutorials. But I think underneath it all, she’s just a young girl trying to figure herself out, and I hope that young girls can relate to her and understand the pressures that she goes through and kind of resonate with that part of her… There’s so many pressures that come with social media. Especially with cancel culture, it’s definitely a scary thing. I think as long as you have that balance and know when to put the phone down and have those in-person connections, it’s important to know your limits and not let it be your whole world.”

Addressing the struggles kids face with fitting in, finding friends, and avoiding the darker sides of social media, Grazer joked, “Who am I to give advice? I still don’t fit in!” But he then shared how he personally resonates with Barney. “Firstly, I really related to Barny. I’d just finished middle school, which was the most awkward stage of my entire life, but then I found Barney, and I was like, ‘Oh my gosh, yeah! I can pull that off… I can do that!’”

And his advice? “Just know who you are at every age,” he said. “Incorporate self-love and know your self-worth and value… There are so many pressures on social media, and the funny thing about it is that I grew up with it, but 75-year-old Zach didn’t. [Laughs all around]. It’s been part of my life. It’s advertised as the greatest way of making friends ever, but it’s the most toxic playground where you’re fed the most judgment you’ll ever see in your life. So, the greatest thing is just to know who you are and stay grounded.”

Galifianakis, responding to his young castmate’s jest, responded, “If you’ve ever been desperate for a friend, that makes for an interesting relationship. What’s neat is to see the juxtaposition of all the cool kids [in this movie] with their toys that work, and then Barney’s given this more ‘human’-like robot, if you will, with its flaws and glitches. Just watch that kind of natural progression; they kind of fall in love with each other. I mean, you’ve seen how charming Jack (Grazer) is…”

“…If he’d just shave that mustache, he’d be fine.”

Join Barney, Ron, Graham, Savannah, and all their friends in Ron’s Gone Wrong, in theaters this Friday, October 22. 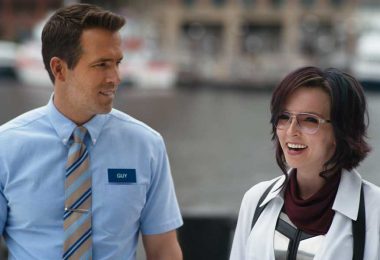 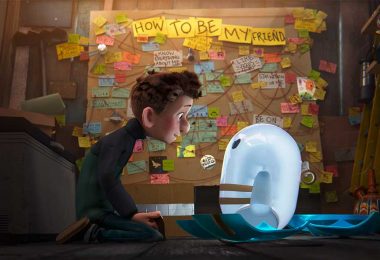 The Ron’s Gone Wrong Creators Discuss Technology, Relationships, and the Heart of Friendship