Home / News / D23 Exclusive / From the Jaws of Hell: The Scarecrow of Romney Marsh

For Halloween, let our thoughts turn to a mysterious hero who stalks the night with a frightening visage, striking fear into those who unjustly took advantage of the oppressed. This fearful avenger wore a mask, a cape, and rode with a young sidekick to aid him in his crime-fighting quest. Thinking Batman? Think again—it’s actually Walt Disney’s The Scarecrow of Romney Marsh. As the film’s theme song goes…

Through the black of night he’d ride
From the marsh to the coast
Like a demon ghost
He’d show his face then hide.

This phantom vindicator rode out of the pages of British literature in the tale of an 18th century night-riding smuggler who was actually on the side of justice. The elusive Scarecrow (actually, a vicar with the ironic name of Dr. Syn in disguise) led a smuggling band that gave the profits of their exploits to the poor and heavily taxed peasants of the marsh area. 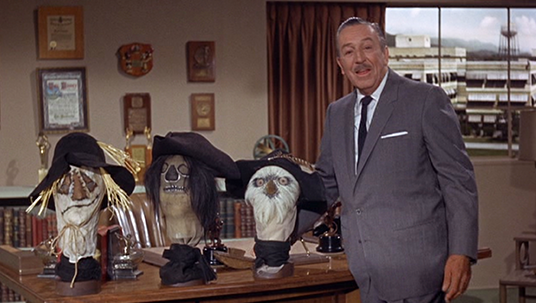 One of the strangest and most fascinating Disney productions ever to gallop across the screen, this elaborate action-adventure was first presented on Walt Disney’s Wonderful World of Color in 1964. A Disney TV favorite in its day, this timeless tale of eerie escapades, moonlit shadowy thrills, and a ghostlike champion today has an avid cult following. The Scarecrow’s alarming mask and costume, plus his trademark, blood-curdling laugh—echoing over Romney Marsh each time this demonic defender of the poor challenges the militia of King George III (of American Revolution fame)—offers a supernatural quality perfect for Halloween. So on this dark October night, let’s gather around the flickering hearth (color television, that is) and listen to some haunting tales of the uncanny Scarecrow as we celebrate this spooky swashbuckler’s 50th anniversary. 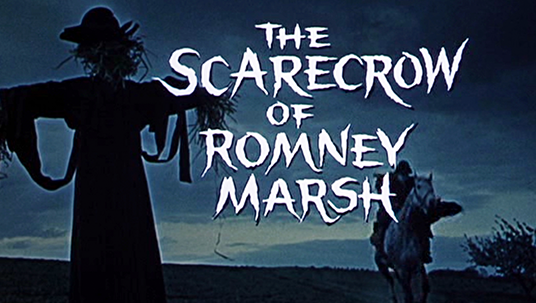 “Books of adventure, suspense, and mystery always have a special appeal for me when they’re about real people or based on the life of a real person, like [the Dr. Syn books] by the English author Russell Thorndike,” Walt Disney told his television audiences as he introduced The Scarecrow of Romney Marsh in 1964. “The hero of all the Thorndike stories is one of the strangest characters who ever lived, a real-life Dr. Jekyll and Mr. Hyde. He lived in England nearly 200 years ago. By day he was a respected member of his community, and by night he was the greatest smuggler in the whole country. But, like Robin Hood, although he was a thorn in the side of law and order, he was a hero to the ordinary folk of his time. Because whatever he made as a smuggler, he gave away to the poor and the needy.”

In this three-part saga, set circa 1775, the Scarecrow—assisted by the demonically disguised Curlew (young John Banks, son of the local squire, masked as a bird) and Hellspite (Dr. Syn’s sexton, Mr. Mipps, wearing a skull mask), the Scarecrow is determined to thwart the soldiers of the unjust King. 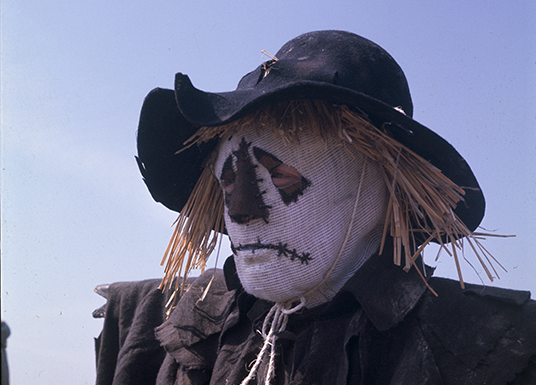 The original Dr. Syn novels, written from 1915 to 1945, were loosely based on the exploits of actual 18th century smugglers known as the Hawkhurst Gang. Author Thorndike was born in Kent in 1884 and grew up with tales of these smugglers who haunted the murky marshes. The writer was also an actor and, in fact, portrayed Dr. Syn in a 1925 London stage adaptation. The eighth book, Christopher Syn, was published in 1960 (with American scribe William Buchanan as co-author), and was the volume on which Disney based his 1964 screen version of the story. Thorndike visited the Scarecrow set during filming. The author happily reported, “I’m absolutely delighted with the treatment in the Disney production.” Part of the cleverness of the Thorndike creation—brilliantly realized in the Disney production—was that, unlike Robin Hood or Zorro, this seemingly creepy crusader was made a fearful figure, conceived to horrify the corrupt officials he battles. 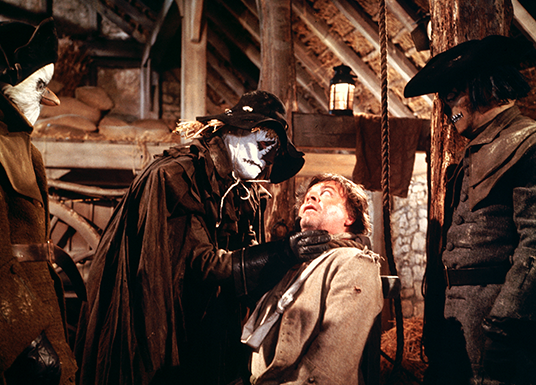 Into this very British story, Walt shrewdly incorporated an American character sought by the King’s soldiers as a traitor for advancing the American colonies’ defiance of the crown. In the character of John Banks, Walt also showcased a boy sidekick for the Scarecrow, riding in the darkness with his own disguise, the bird-like hellion known as Curlew; young John Banks was an identification figure for Walt’s audience members, especially the youngsters. John is played by Sean Scully, a Disney discovery who had scored in his own dual role in the 1962 Wonderful World of Color production of “The Prince and the Pauper.” 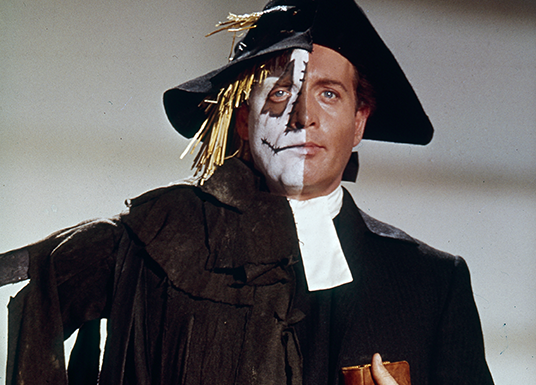 As for the main character, Dr. Syn has an intriguing dual nature. “Dr. Syn was a kindly sort of fellow,” noted Patrick McGoohan, who portrays the vicar-turned-vigilante, “but with a will of steel, and I always saw the Scarecrow as his other persona. So neither one was dominant, they each were compatible with the other.” McGoohan won international fame as the star of the 1960s television series Secret Agent (originally called Danger Man when it was first telecast in England in 1960), and later was renowned for the cult TV classic, The Prisoner, which debuted in the United Kingdom in 1967). With his piercing blue eyes (visible even from within the Scarecrow mask) and his intense personality, Patrick McGoohan is perfectly cast as Dr. Syn and his otherworldly alter ego. 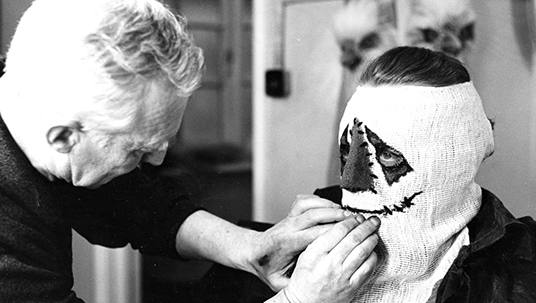 To disguise the mysterious man of the cloth, veteran English makeup expert Harry Frampton used a very special cloth. In fact, it was, as Disney publicity put it, “a housewife’s ordinary dishcloth.” The unearthly mask had to be loosely stitched to mimic a scarecrow’s head, and lightweight enough to allow McGoohan to both emote and breathe. “I struck upon using a dishcloth because it was readily accessible,” recalled Frampton with typical British understatement. “After some stitching and painting, it took on an eerie quality. Then I gave McGoohan a shapeless slouch hat, with straw sticking out from under it. But after putting it together, the real straw looked too fine. It didn’t photograph right. We replaced it with thicker, manufactured champagne straws, imported from France.”

“The makeup people took a cast of my head,” added McGoohan, “and then they molded the mask to the cast so that wearing it was completely comfortable—nothing was glued to [my skin] so it was very comfortable.” To compliment the macabre mask, Frampton placed a three-foot board across McGoohan’s shoulders under a dark and tattered coat. The ragged cloak then formed a shroud-like cape that dramatically flowed behind the ghoulish Scarecrow as he rode across the midnight marshes. 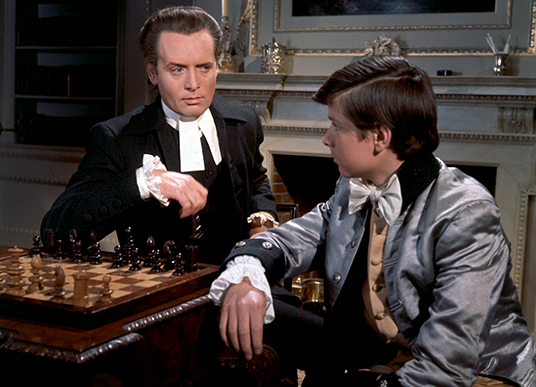 Interiors were filmed at England’s famed Pinewood Studios, where such classics as David Lean’s Oliver Twist (1948), and the James Bond adventure Dr. No (1962), had been shot. The exteriors were shot on location in many of the actual sites of the Dr. Syn stories, for as Walt said of the Scarecrow, some locals “still talk about him at some of the old inns there today, and you can see rooms he hid or slept in and the parish church where he preached as vicar.” Walt loved the authenticity achieved by shooting on location and the marshes, villages, and ruins create a picturesque backdrop. The Romney Marsh area is on the Kent-Sussex coast approximately 70 miles from London. The action-packed beach scenes were filmed around the Camber Sands area. The street scenes are part of Church Square in the nearby city of Rye. 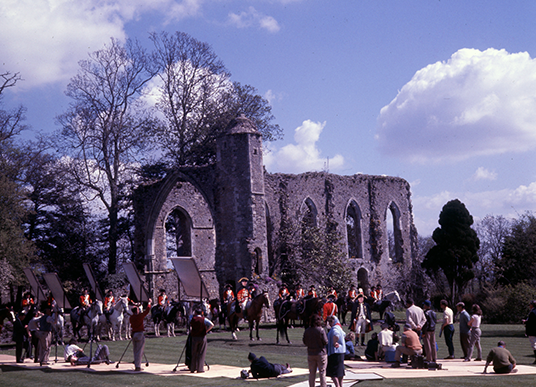 The suitably spooky abbey ruins seen in the shows were a protected historical site nearby, meaning that special precautions had to be taken during filming, including putting boards down on the grass for the horses to stand on. Most of the night scenes were actually shot during the day with a special filter—”day for night”—giving the after-dark scenes an extra layer of eeriness. 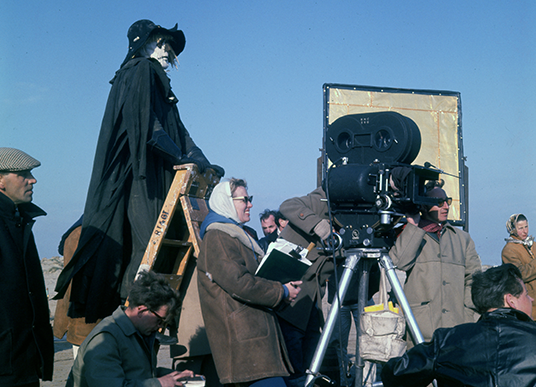 For the church where Dr. Syn serves as vicar, St. Clement’s, a 12th century church at Old Romney was utilized. The aged structure, still in use as a parish church, was in the midst of a structural restoration that had been stopped for lack of money. Dr. David Pope, then-rector of the Romney Marsh group of parishes, was elated when Disney carried on the restoration before filming began. A new west door was installed, a stairway was replaced, the 200-year-old gallery was repaired, and the ancient pews were renovated. Following production, Disney donated the funds needed to complete the church restoration. St. Clement’s parishioners still refer to this as the “miracle” that saved their church. 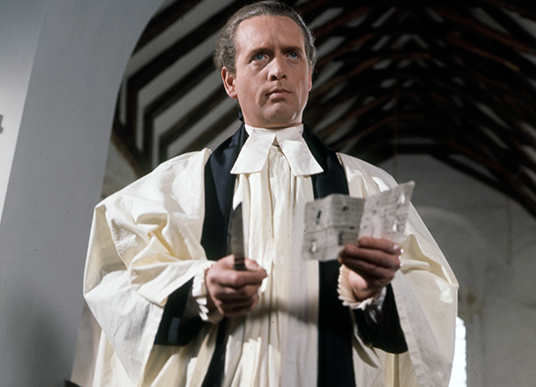 As with many a memorable Disney production, one of the most unforgettable aspects of this specter-centered show is the haunting theme song. Punctuated by the Scarecrow’s hair-raising laugh, his theme song serves as a ballad—both setting the tone for the taut story of suspense and helping to establish for the viewer the colorful legend of this midnight righter-of-wrongs. 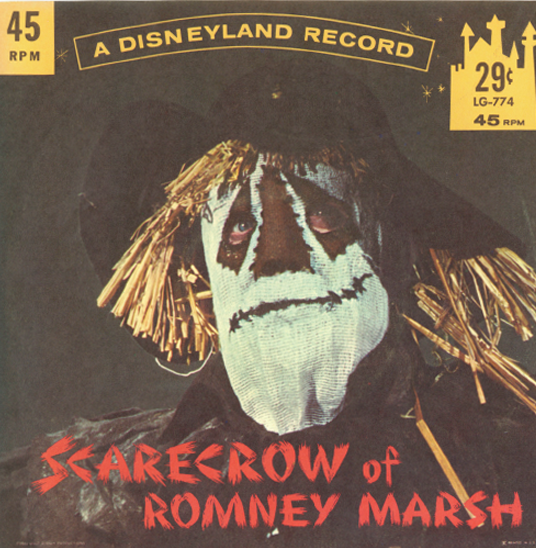 The “Scarecrow of Romney March” song was composed by Terry Gilkyson, who also wrote “My Heart Was an Island” for Swiss Family Island (1960), the theme for Disney’s The Three Lives of Thomasina (1963, also starring Patrick McGoohan), and the Academy Award®-nominated “The Bare Necessities” for The Jungle Book (1967). The “Scarecrow” song was released as a single and on the Disneyland Records Walt Disney’s Wonderful World of Color LP album. Other merchandise included comic books, a novelization and a very appropriate Halloween costume.

Co-producer Bill Anderson was so impressed with the quality of the TV triumvirate of episodes that he tried to convince Walt to release them theatrically instead of airing them on television. But Walt was dedicated to showcasing superior programming on his TV show and broadcast the episodes as planned. However, the three “Scarecrow” installments were stitched together as a movie released in England to box office success. 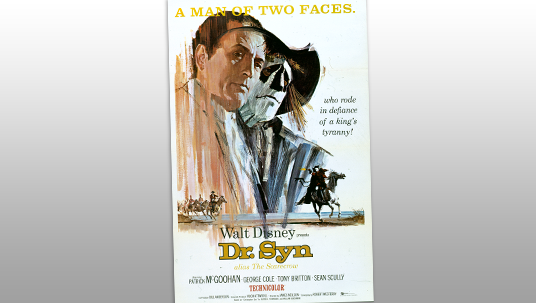 Eventually, in 1975, Disney did release a movie, known as Dr. Syn, Alias the Scarecrow, to U.S. theaters. In 2008, the classic Scarecrow TV episodes were released on DVD as part of the Walt Disney Treasures series. The Scarecrow of Romney Marsh was one of the most requested Disney titles ever; this limited edition was an immediate sell-out and is now highly sought after by collectors and Dr. Syn fans. 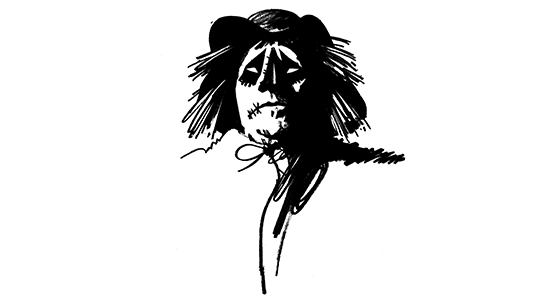 So this Halloween night, if you spy a scarecrow in a darkened field, in a neighbor’s moonlit yard or even on your own front porch, listen carefully…for if you suddenly hear fiendish laughter it just might be the Scarecrow of Romney Marsh—as Walt Disney said, “one of the strangest characters who ever lived”…and one of the spookiest!