Home / News / D23 Exclusive / The Inside Track from the Cast and Filmmakers of Inside ...

Disney•Pixar’s new film Inside Out opens this Friday, June 19. The film takes you inside the mind of Riley, an 11-year-old girl who has just moved to a new city with her parents. Based in Headquarters, the control center inside Riley’s mind, five Emotions are hard at work, eager to guide her through the difficult transition. We recently attended a Q&A with Inside Out’s incredibly talented filmmakers and voice cast—and we’re excited that they shared with us some of the little voices inside their heads.

On how the Emotions were originally conceived:

Producer Jonas Rivera: “Albert Lozano, our character art director, came up with this great little simple drawing of each of them as a different shape: Joy was a star, and she was golden, illuminated, almost like a spark—like an explosion. Sadness was a teardrop, even the shape and color, and her hair was almost a waterfall. Fear was just a raw nerve—drawn like this straight line. He’s tight and conservative and just wound up. Anger is a brick—this brutal briquette that won’t stop, just a square; and Disgust was a stalk of broccoli—because our kids would be disgusted by that.”

Jonas Rivera: “I remember looking at the Milennium Falcon [from Star Wars] and there’s a throttle. You don’t need to know what the buttons do. You sort of just accepted that those buttons worked and did things, and we wanted a similar grammar but in a fun way. We talked to the art department as they started coming up with it—that and the whole room—that it was almost like this combination of it’s a small world and an Apple Store. It was just clinical enough to work and be functional and so forth.” 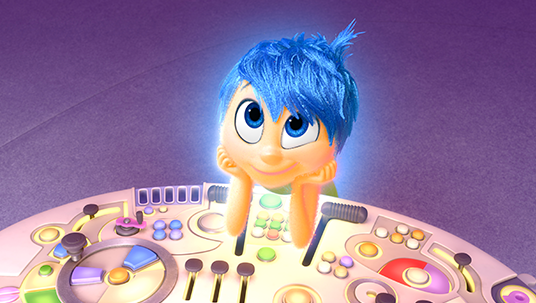 Why Joy has blue hair:

Director Pete Docter: “Giving her blue hair, which was completely opposite of yellow, just rounded her out and made her a more visually complex character. And we liked the idea that even though she doesn’t understand sadness, she has an element of that in her right from the very beginning.”

Pete Docter: “I don’t remember whose idea this was, but instead of recording right away, we spent the whole day reading through the script, one sequence at a time, then Amy would start narrating some of the lines, not just for her, but for some of the other characters as well. She has such a brilliant writing mind as well as being an amazing performer. We took advantage of that.”

Jonas Rivera: “I was a fan of Bill Hader since Saturday Night Live, and it turned out Bill was a fan of Pixar and we didn’t know it. He shows up one day at Pixar and the casting director calls and says, ‘Bill Hader is in the lobby. Does anyone want to go have coffee with him?’ So we go down there and there’s Bill Hader, drinking coffee by himself, and on his own dime he had flown up just because he loves animation… We go and introduce ourselves to him, and he says, ‘Oh my god, is that Ralph Eggleston?’ our production designer that no one would [recognize] unless you watched side three of the WALL•E Blu-ray. He watched everything and knew everybody. We just fell in love with him. He came on to write with us—he’s a great writer and he was so much fun in the story room.”

Jonas Rivera: “I saw her in the movie Bad Teacher and she was just so funny. In Bad Teacher, she was hesitant, couldn’t even order a chicken sandwich. Like, ‘I’ll have the chicken sandwich?’ Everything had a question mark and that felt right. It worked. That’s how we ended up playing the character—she just nailed it.” 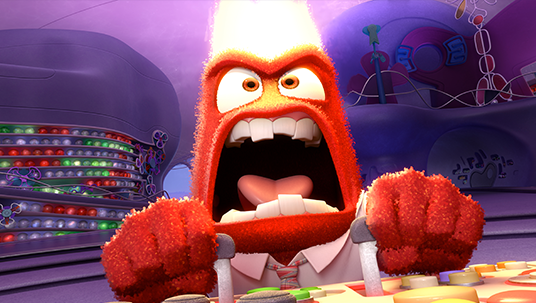 Lewis Black (Anger): “They sent me a box of stuff with a letter in which they said that I may not know what Pixar is—which meant either they were crazy or they thought I was just something short of a recluse, I thought. And so they said that they had this role with Anger—well, that fit—and would I be interested in it? And maybe if I didn’t know them, they sent me all their stuff like, you know, all these things that I’ve seen. And a nice book—I mean, I think I made out better than any of you [the other actors]!”

Mindy Kaling on how much she loved working with Pixar:

Mindy Kaling (Disgust): “It’s almost as if Pixar and Pete and Jonas and the experience of working with them is like dating a guy. It’s like this really well-raised guy that doesn’t know that he looks like Tom Brady.” 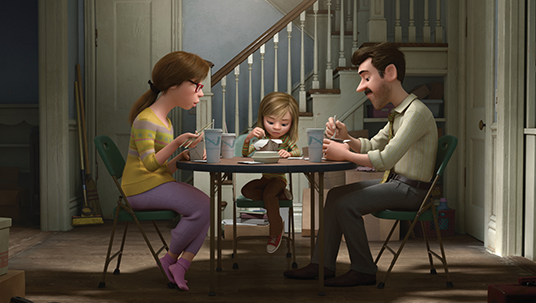 On why they chose to make Riley 11 years old:

Jonas Rivera: “That really felt like the fork in the road for most kids. I always think about Steven Spielberg movies in the ’80s. I was always a hair younger than those kids at that time, and I always thought that was cool.”

Pete Docter: “We did kind of hedge up and down around 11, just trying to find exactly the right age where you’re becoming an adult; because some parents would say, ‘My 9-year-old is already doing that.’ Some people would say, ‘My 13-year-old.’ So 11 seemed like a good target.”

Amy Poehler (Joy): “I love that age girl, that moment before you know you’ve been thrown in the snake pit, where you’re just like all possibility and really open-faced and just ready for everything. And boys are the same way, too. It’s just that great time. I feel like as an adult you’re just trying to always get back to it, it’s like “magic hour.” 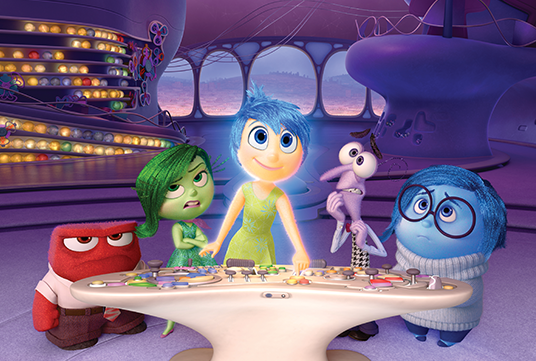 On the recording process:

Bill Hader (Fear): “Mindy and figured out that we’re all actually reading with Pete. So in the movie, we’re all just sort of responding to Pete, all of our characters were basically just talking to Pete.”

Phyllis Smith (Sadness): “I had the privilege of recording with Amy, and it was great. Amy helped me through some lines that I might have been having a little trouble with and she’d give a suggestion, tweak here and there…”

On the Pixar “brain trust”:

Pete Docter: “I think everybody chips in stuff. Frankly, you could show Casablanca in that room and we would find things wrong with it and chip it apart. A lot of it is schedule, and everybody knows the schedule. Everybody knows where we are and is respectful of that, so on the ninth screening people aren’t going to say, ‘Why emotions?’ They’re going to have more specific, targeted notes.”

On Pixar’s other films:

Mindy Kaling: “Up really made me feel, as a writer, like ‘Wow, you can do anything,’ and as you get older it’s harder to find movies that do that.”

Amy Poehler: “I love WALL•E. I just love the first 35 minutes of no talking. The audacity to make a movie like that… it’s kind of like the big risk, big reward philosophy of Pixar.”

On why Inside Out is a classic film that kids must see:

Bill Hader: “I think what’s so great about this movie is that they chose to make a film about a time in your life that we all have to go through, you go from being young and then you start to go—you know, you’re an adolescent and things start to change and things start to get hard for you. A lot of normal movies don’t talk about that. I wish I had that growing up, because you look for answers and you think you’re the only one going through this thing. And they did it in this film in such a beautiful, fantastic way. My life would have been a little easier if this movie existed when I was a kid.” 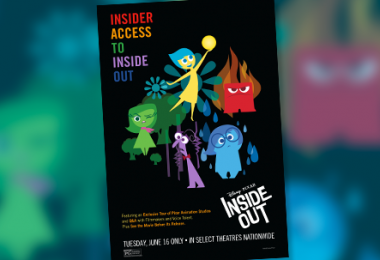