There’s a brand-new series arriving soon on Disney+, and just this week we got to see a few sneak peeks at the excitement to come. Marvel’s 616 explores how Marvel’s rich legacy of stories, characters, and creators exist within the world outside your window. Each documentary—helmed by a unique filmmaker—explores the intersections of storytelling, pop culture, and fandom within the Marvel Universe. The first clip, above, is from the episode “Higher, Further, Faster,” directed by Gillian Jacobs. In it, she shines a light on the trailblazing women of Marvel Comics and how they found ways to tell stories of representation and inclusion.

In this second clip, above, from the episode “Lost and Found,” actor and comedian Paul Scheer shares his eye-opening and hilarious quest to discover the “forgotten” characters of Marvel Comics.

Well, the day has finally come to welcome live sports back on the ol’ television set… or streaming device of your choice. And amongst all the amazing stuff to watch this weekend is NBA Countdown presented by Mountain Dew: NBA Restart (Saturday, July 25, at 8 p.m. ET on ABC)—sure to get you primed and ready for some thrilling basketball action! Read up on what else you can expect from around the worlds of Disney by clicking here. 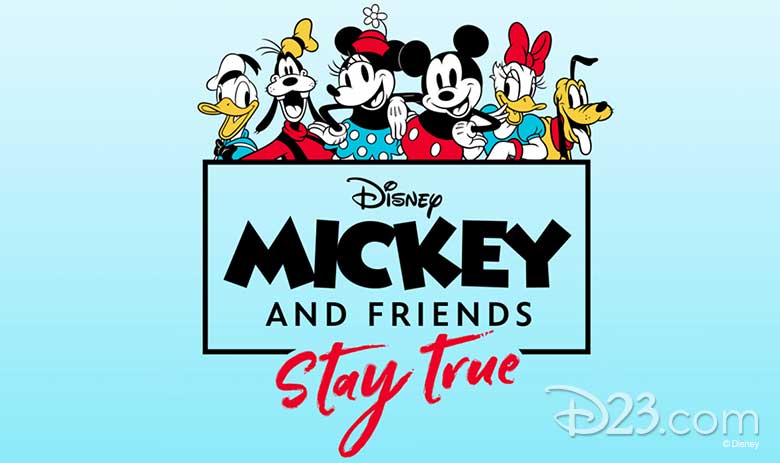 There’s nothing quite like friendship to bring color, warmth, and fun to your life—and that’s especially important when times are tough. And there’s an all-new celebration, starting this week, to honor these important relationships…

Mickey & Friends: Stay True is a new global campaign inspired by our beloved Sensational Six—Mickey Mouse, Minnie Mouse, Donald Duck, Daisy Duck, Goofy, and Pluto—and their truly iconic friendships. Almost 100 years’ worth of countless adventures and memorable milestones have cemented the Sensational Six as a symbol of loyalty, kindness, and hope across the globe.

Starting this week and culminating on July 30—which happens to be International Friendship Day—Disney is calling on fans around the world to give a shout-out to their friends for “staying true” (through social media channels and more) using the hashtag #MickeyFriendsStayTrue.

Wanna get in on the friendship fun? Stay tuned to the @MickeyTrueOriginal Instagram handle, where fans can find out all the ways to get involved—each inspired by a different member of the Sensational Six—every day throughout the week. Also, be sure to use that #MickeyFriendsStayTrue hashtag to share your stories of friendship… some of which might end up being featured on Disney’s social platforms and even on ABC’s Good Morning America.

By the way, thanks for being our friends! We appreciate it!

Disney’s Emmy®- and Imagen Award-winning animated series Elena of Avalor, inspired by the incredible diversity of Latin cultures and folklore, will be celebrating its series finale with an all-new prime-time special on Sunday, August 23, at 7 p.m. Read more about it—and hear from the show’s creator and executive producer, Craig Gerber—right here at D23.com.

Here’s a bit more awesome news from the world of Marvel: Just this week, Marvel Entertainment premiered the first episode of a brand-new digital series! Available on both Marvel’s YouTube channel and on Marvel.com, Marvel’s Storyboards is a 12-episode nonfiction series following Joe Quesada, executive vice president and creative director of Marvel Entertainment, as he explores the origin stories and inspirations of storytellers of all mediums, backgrounds, and experiences at their favorite spots throughout New York City and beyond. Check out the trailer for the series, above.

Season One kicked off on Thursday, July 23, with the one and only Hugh Jackman; do make sure check the episode out, and stay tuned all summer long for more brand-new Marvel merriment.

Just a few more days until we get to witness this sure-to-be-ridiculously-memorable new film from Beyoncé Knowles-Carter… And as such, Disney+ and Parkwood Entertainment just released a new trailer Black Is King, helmed by the 24-time Grammy® Award-winner. Premiering globally on July 31, 2020—and based on the music of The Lion King: The Gift—Black is King will premiere two weeks after the one-year anniversary of the theatrical release of Disney’s global phenomenon The Lion King. Take a look at the trailer, above.