. . . one that sounds somewhat familiar, yet slightly off—San Fransokyo. This Friday, November 7, audiences around the world will travel to the high-tech locale, and meet Hiro, Baymax, and the rest of the Big Hero 6 cast.

But before the film hits the big screen, the trio talks to D23 about their experience (they went to Tokyo and San Francisco for their research trips!) and other stories from production.

Live-action superhero films often make audiences feel like their movies’ powerful figures exist in our world, but you don’t quite have those constraints with animation. How does that affect the direction you take with this kind of story?
RC: I wouldn’t say we don’t have those constraints because one of the big tenets that we work under is we want to make our story logical. We did an amazing amount of research, from the medical aspects of Baymax to the powers of what superhero suits can do; it’s all kind of based on actual science. And early on, we spent a fair amount of time at Carnegie Mellon and MIT. I think it’s really important to base your story in the truth.

How were you able to find a perfect balance between Eastern and Western styles?
Don Hall (DH): It was actually kind of a fun challenge. John [Lasseter, chief creative officer, Walt Disney and Pixar Animation Studios] is always encouraging us to create new worlds, and we could’ve set the story in San Francisco or Tokyo, but the idea of kind of making up our own world was far too enticing. We feel that it’s creatively more fun to set this story in a world that’s more of a mash-up. And once we went on our research trips to Tokyo and San Francisco, things would just start popping up. It gave us nice guidelines to follow.

How did your team work together with Marvel to bring this story to life?
DH: Marvel really encouraged us to take Big Hero 6 and just do our thing with it. And from the beginning, they were very, very gracious with their property to let us do that.
Roy Conli (RC): It’s been great because Joe Quesada and Jeph Loeb, who are two major creative players at Marvel, would come to all of our screenings and share notes with us. It’s just been an amazing relationship. 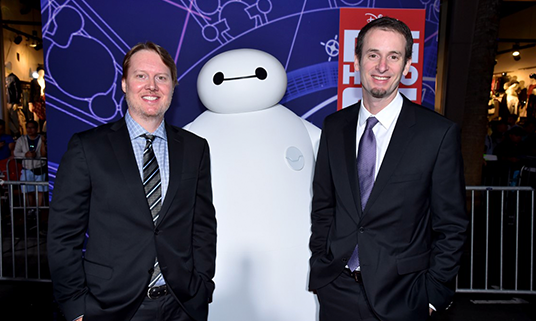 What was so special about the journey of making Big Hero 6?
Chris Williams (CW): I’ve been here 20 years, and every movie is exciting because each presents us with its own set of challenges. And a lot of this journey involved finding the personality of this movie that would be all encompassing, that would make everything play nicely together. We challenged each other a lot, and there was a lot of wiggling, changing, and adjusting. Then we got to this place where it’s like, “Hallelujah, it works, all these things work!” It’s like a meal. You can have all these wonderful ingredients, but you can’t just pour them in the same amount in the meal and expect it to taste good. You have to kind of balance it out and figure out what’s there! 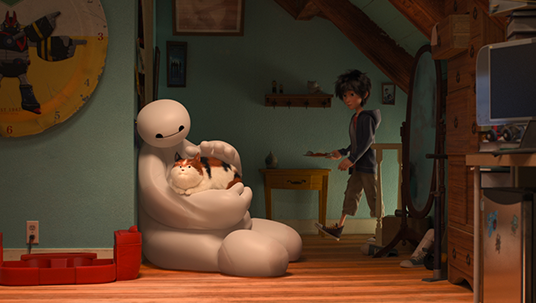 What did you find that you could do with a superhero story through animation that makes it unique and different from live action?
DH: It was really important early on that nobody’s really super powerful. Nobody can fly; nobody got bombarded with gamma rays or, you know, cosmic rays or anything else. The characters are all normal people who are really smart and have access to technology. And so I thought that was important because I wanted to ground it in a certain reality and put limitations on the characters. Go Go, for instance, racing around on these sort of magnetic wheels at supersonic speeds, gave animators a lot of freedom to come up with really cool ways to make her move. And even Baymax—making him so simple and elegant, and not having a mouth. This challenged our team and enabled them to express things with very few of the sort of bells and whistles that they normally do with that. These are things that wouldn’t have been pulled off in live-action that we could pull off better in animation.
CW: We were able to caricature a little bit more as well. We pare things down to a more simple truth, and sometimes that can just mean that the particular action scene or an action moment is really crystallized down to its most awesome form. 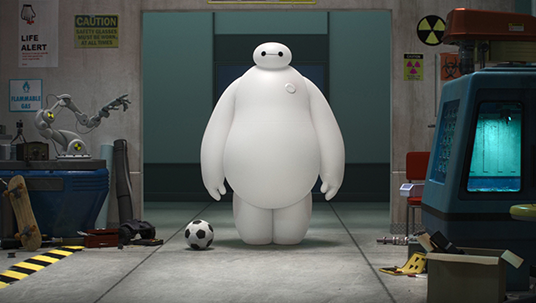 Could you maybe give us an example from a Story Trust meeting of an “Aha!” moment that helped shape what you were doing with Big Hero 6?
RC: I could relate one incident where there was a spark that actually drove everyone to start thinking in a different way, and that was when we had an off-site—a day after a screening when we put ourselves in a room and just start brainstorming. For this day in particular, we brought in several social workers to talk about loss amongst teenagers [spoiler alert!]. At the end of those three hours, we were buzzing and the Story Trust was there at the time, and we just started throwing out ideas. I think it really helped focus the film in terms of the thematic [elements]. And certain things evolved or devolved. It was just a really exciting time though, because we found the root of who Hiro was and what Hiro was going through, and how Baymax could help him.