Ready to “Seize the Day” in a whole new way? Disney Theatrical Productions has partnered with Fathom Events (the leaders in entertainment events broadcast to the big screen) to bring their Tony Award®-winning smash hit musical Newsies to cinemas across the country. And they’ll “open the gates” for a rare three-day event this February! Check out this inside look for the exclusive experience, below.

D23 was fortunate enough to attend the filming—which took place after several weeks of round-the-clock rehearsals for both the cast and the film crew. During one of those rehearsals, D23 spoke with several members of the cast about what makes this event so extraordinary. “Coming back to the show has been crazy and amazing all at the same time,” says Lindsay (currently starring on Broadway as Glinda in Wicked). “It’s been what, three years? But it all kind of comes back as well. There’s a lot of muscle memory that kicks in… we’re all family, so it’s nice to be with our ‘siblings’ again and get to tell the story together again. We have so much fun, it’s stupid that it’s a job!”

Keenan-Bolger agrees, adding, “I think any time you spend some time away from a project, there are all these little light bulbs that come up. You might be in line for Starbucks and think of a line reading that you never tried out. So, having spent a few years away from it and getting to return, I feel like there’s a whole new vitality in the Broadway cast—and a lot of it feels like we’re doing it for the first time.” Not even a busy TV schedule could keep Jordan away from this one-in-a-lifetime opportunity. “I missed the first few days of rehearsal for Newsies because I had to work on [Supergirl],” he admits. “So I had to re-memorize the whole show before I got to rehearsal and hit the ground running. I didn’t really sleep much that first week—but then the second week, I felt like all I did was sleep when I wasn’t shooting! The cast all gelled instantly—and after a day or two, the show felt like an old glove.” With a magnetic score by Tony winners Alan Menken (Beauty and the Beast, Aladdin, The Little Mermaid) and Jack Feldman, and a script by Broadway legend Harvey Fierstein, the show has truly universal appeal. Says Jordan, “It has all the elements of a successful musical… memorable songs, great dancing, a snappy script, a great combination of humor and drama, a strong ensemble, and relatable characters.”

It’s the opportunity for fans across the country to see a Broadway production—preserved in its entirety (and even including a song for Crutchie, “Letter from the Refuge,” cut from the show during its move from New Jersey’s Paper Mill Playhouse to the Nederlander Theatre in New York City in 2012)—right in their own hometown that really excites Fankhauser. “It’s so amazing to go into a movie theater and get that real ‘stage’ experience,” he explains, “and I take that with me as an artist, in terms of the impact it has on the audience… that impact that’s reaching through the screen. I think to have our show be so accessible through Fathom Events, it’s just going to further the momentum of it—and the love that everyone has for it. I think it’s so cool.” Keenan-Bolger continues, “There are going to be a lot of kids who will turn to their parents and say, ‘I want to do that.’ It’s going to be a lot of people’s first experience with musical theater—and I think in that, there lies a lot of responsibility for us to make this the most spectacular performance ever.”

Disney’s Newsies: The Broadway Musical will also include exclusive behind-the-scenes footage and interviews with the cast and creators. Tickets for the three showings—on February 16, 18, and 22—and information about the select 700 movie theaters participating can be found at FathomEvents.com. Showings will also take place at the El Capitan Theatre in Hollywood, CA on February 16 (sold out), 18, and 22. 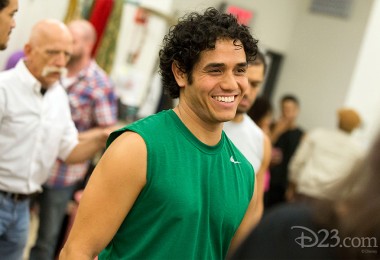