The multitalented Mindy Kaling—who voiced Disgust in Inside Out, portrayed Mrs. Who in A Wrinkle Time, and created and starred in the Hulu comedy series The Mindy Project—has joined the hilarious cast of Disney+’s highly anticipated animated series Monsters At Work. Kaling will voice the character Val Little, who is an enthusiastic member of the Monsters, Inc. Facilities Team (aka MIFT). Additionally, Bonnie Hunt will reprise her role as Ms. Flint. Formerly in charge of training new Scarers at Monsters, Inc., Ms. Flint now manages the department responsible for recruiting and training the funniest monsters to become Jokesters. Monsters At Work will begin streaming on Friday, July 2, exclusively on Disney+.

Ben Feldman voices the lead character Tylor Tuskmon in the series, which will introduce new monsters alongside returning favorites—including Mike Wazowski and James P. “Sulley” Sullivan, who will again be voiced by Disney Legends Billy Crystal and John Goodman. Starring alongside Feldman and Kaling as part of the MIFT crew are Henry Winkler, who voices Fritz, the scatterbrained boss; Lucas Neff, who voices Duncan, an opportunistic plumber; and Alanna Ubach, who voices Cutter, the officious rule follower.

Monsters At Work takes place the day after the Monsters, Incorporated power plant started harvesting the laughter of children in order to fuel the city of Monstropolis (thanks to Mike and Sulley’s discovery that laughter generates 10 times more energy than screams). The series follows the adventures of Tylor Tuskmon, an eager young monster who graduated top of his class at Monsters University and always dreamed of becoming a Scarer… until he landed a job at Monsters, Incorporated and discovered that scares are out and laughs are in. After being temporarily reassigned to the Monsters, Inc. Facilities Team (MIFT), Tylor must work alongside a misfit bunch of mechanics as he works toward becoming a Jokester.

In addition to Crystal, Goodman, and Hunt, returning voice actors from the beloved film franchise include John Ratzenberger as Yeti and Tylor’s dad, Bernard; Jennifer Tilly as Celia Mae; and Bob Peterson as Roze, the twin sister of his original Monsters, Inc. character, Roz. Voicing additional new characters are Stephen Stanton as Smitty and Needleman, the bumbling custodial team at Monsters, Inc., and Aisha Tyler as Tylor’s mom, Millie Tuskmon.

Produced by Disney Television Animation, the series was developed and is executive produced by Disney animation veteran Bobs Gannaway. It is produced by Academy Award®-nominated producer Sean Lurie. Kat Good and Steve Anderson are supervising directors. The late Rob Gibbs (Monsters, Inc.) served as director on some earlier episodes.

Before Monsters At Work debuts this July, enjoy the movies Monsters, Inc. and Monster University and the shorts Mike’s New Car and Party Central, currently available on Disney+. 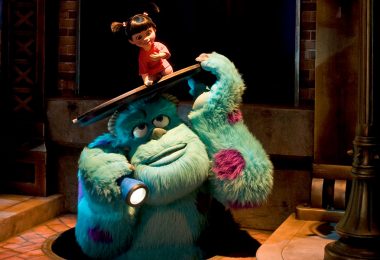 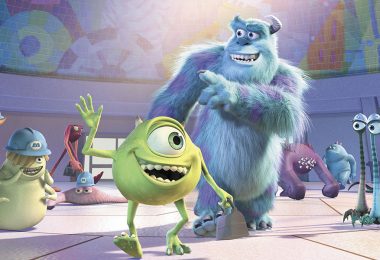 Celebrate a Monster of an Anniversary with 15 Things We Love About Monsters, Inc.