Our friends at Disneyland Paris just announced Marvel Avengers Campus will open on July 20, 2022! Marvel Avengers Campus is an entirely reimagined universe dedicated to discovering, recruiting, and training the next generation of heroes. Are you ready to team up with the Avengers and their allies, sling webs like Spider-Man, fly into space with Iron Man and Captain Marvel, and suit up and re-fuel in true Super Hero fashion?

The answer, of course, is YEESSSSSSS! (Please read that in Thor’s voice.)

Opening as part of the 30th Anniversary celebration of Disneyland Paris, Marvel Avengers Campus is a key part of Walt Disney Studios Park’s multi-year transformation. Avengers Campus was created by Tony Stark himself to discover, recruit, and train the next generation of Super Heroes. For the first time, recruits will be empowered to take an active role alongside Earth’s Mightiest Heroes. Walt Disney Imagineering teams in Paris and around the world have been working side-by-side with teams that brought the Avengers films, television series, and comics to life. Together, they designed and created a brand-new place in the Marvel multiverse that champions the inner Super Hero that lives in all of us—and soon, you can take the next step in your heroic journey! 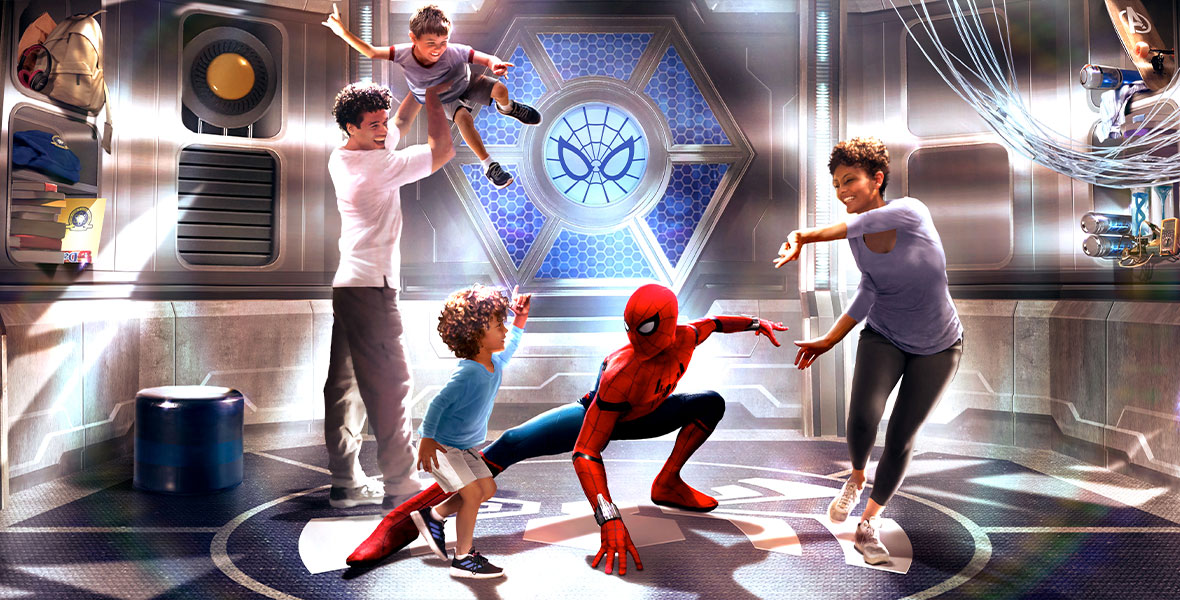 Recruits will have the opportunity to meet Spider-Man, Iron Man, or Captain Marvel in a new dedicated building unique to Avengers Campus in Disneyland Paris: the Training Center! For the first time in a Disney Park, a dynamic “freeze frame” video sequence, created by Disney PhotoPass with 27 cameras all around the action, will capture your meetings with Captain Marvel or Iron Man and turn them into unforgettable moments. These unique encounters will be available to book via the Disneyland Paris mobile app.

In other words, it’s time to start practicing your Super Hero poses! 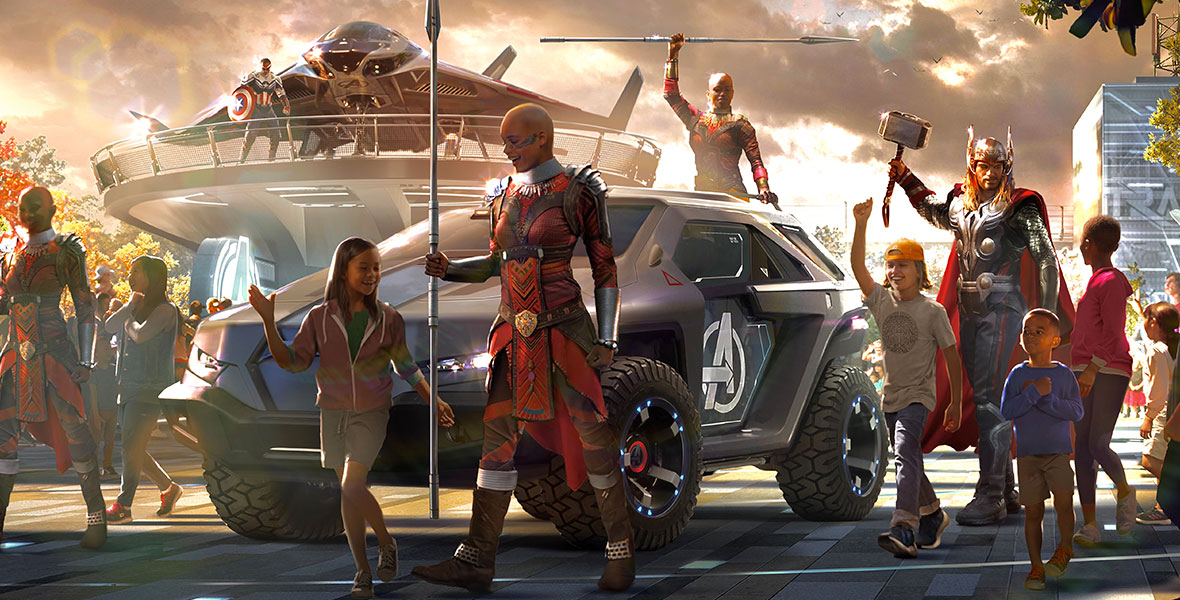 New recruits of all ages will get to encounter heroes outdoors throughout their visit in more interactive and exciting ways than ever before. For example, you will get the chance to train with Black Panther’s loyal protectors, the Dora Milaje, and learn from the warriors of Wakanda about what it’s like to be a member of this elite royal guard.  Plus, you’ll be invited to join an interactive dance-off with Star Lord and Gamora from the Guardians of the Galaxy. And the Gateway Portal will offer you the chance to capture the moment when you meet one of the many Super Heroes of Avengers Campus.

F.R.I.D.A.Y., the artificial intelligence designed by Tony Stark, will look for and interact with the Earth’s Mightiest Heroes. Uploaded to the building façade of the Avengers Assemble: Flight Force building—aka Avengers Headquarters—F.R.I.D.A.Y. will welcome recruits to the Campus, monitor it for threats, and signal the Avengers’ arrivals and departures. F.R.I.D.AY.’s presence will be exclusive to Disneyland Paris. 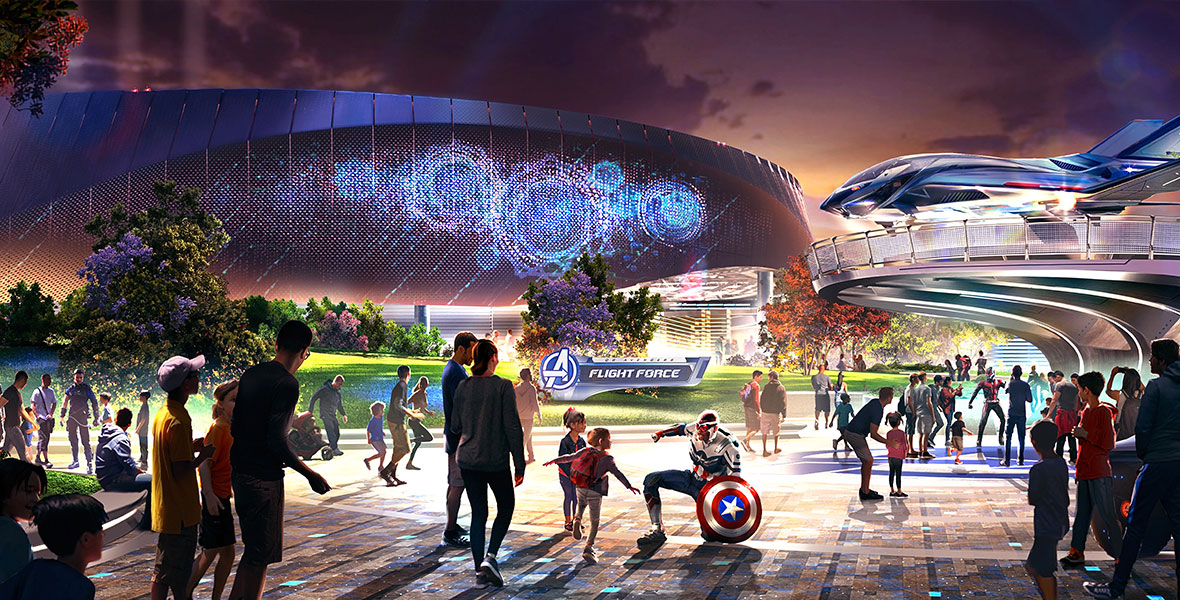 Also exclusive to Disneyland Paris, Avengers Assemble: Flight Force is a high-speed roller coaster that teams recruits up with Captain Marvel and Iron Man! Recruits will be briefed by Iron Man and equipped with a brand-new Mark 80 armor exclusively designed for his missions at Avengers Campus. With no time to waste, they will join Captain Marvel and Iron Man on a high-speed mission, flying through outer space in a vehicle that Tony has armed with a homing device to lure the threat away from Earth!

Brie Larson is reprising her role as Carol Danvers aka Captain Marvel in Avengers Assemble: Flight Force—and she shared the good news herself in a video message (below)! As for the thrill ride, it features a high-speed launch of that goes from 0 to 60 mph in less than three seconds, three inversions, two rollover loops, and one corkscrew! Iron Man in Avengers Assemble: Flight Force is a new generation Audio-Animatronic© figure exclusive to Disneyland Paris and the first Avenger Audio-Animatronic in a Disney Park.

Spider-Man W.E.B. Adventure gives web-slinging superpowers to recruits of all ages. Join Spider-Man in helping to capture the rogue Spider-Bots—Peter Parker’s robot sidekicks—before they wreak havoc on the Campus. Through specially designed, innovative technology that recognizes body movements and gestures, you’ll reach out your hands and sling webs from your wrists, just like Spider-Man! As the WEB Slinger vehicles progress and the mission continues, the Spider-Bots will become increasingly difficult to beat as they continue to multiply. After helping Spidey trap the out-of-control Spider-Bots, recruits will see how many they caught as a team in their vehicles.

Are your Spidey senses tingling? Because Tom Holland will reprise his role as Peter Parker in the attraction! Says Holland, “I can’t wait for you guys to experience this.” 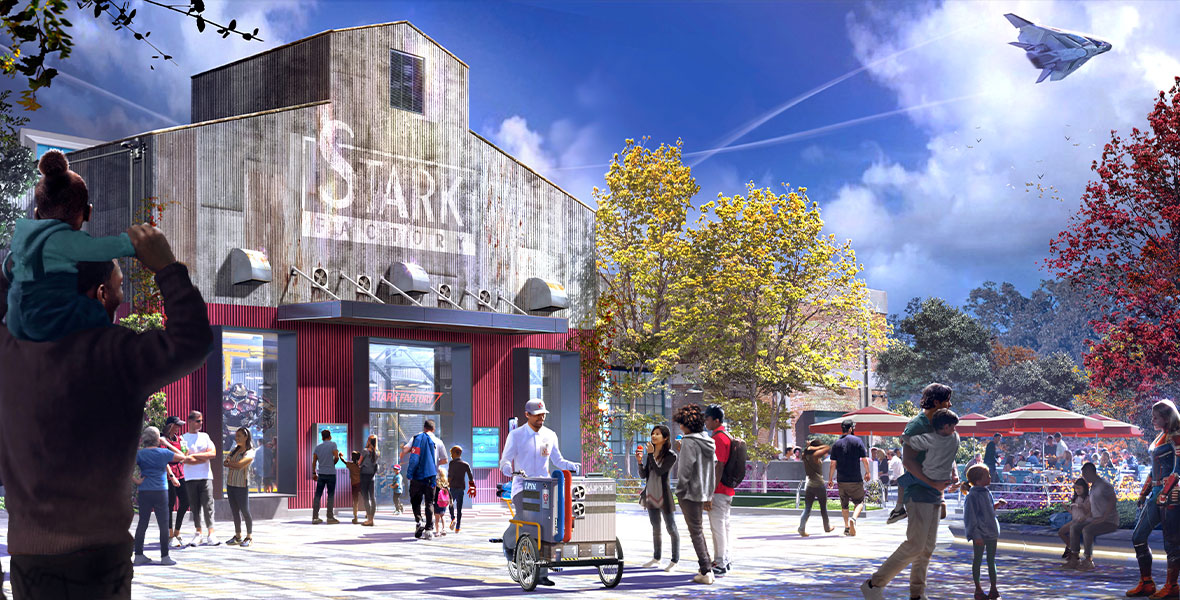 Pym Kitchen is an innovative science lab where the food and drinks tell a story. Just as Ant-Man and The Wasp use “Pym Particles” to grow and shrink, well, just about anything, Pym Technologies applies this science to the creation of shareable bites, inventive entrees, and sweet treats as a buffet. Savor an array of offerings at unusual scales—from pretzels, sandwiches, and hot dogs to burgers, vegetables, and cakes!

Stark Factory is a quick service restaurant where refueling recruits will get to enjoy a cooking show experience with homemade pizzas fresh from the pizzaiolos’ oven, including vegetarian options, salads, and a choice of fresh pasta. The signature dessert will pay tribute to Thor, inspired by one of his favorite treats from the pages of Marvel Comics. Formerly an assembly line for Howard Stark, Stark Factory will feature relics of S.H.I.E.L.D.’s earlier activities and host many Easter eggs hidden as fan tributes. This will include artifacts built by Tony Stark, including the HulkBuster—the armor he and Bruce Banner created for the Hulk, which is exclusive to Disneyland Paris.

The opening dates for Pym Kitchen and Stark Factory will be announced soon.

Still hungry for more? The WEB (Worldwide Eating Brigade) food truck will be run by the WEB workshop’s inventors and serve a variety of Asian noodles and coconut balls. Tony Stark’s personal favorite, the FAN-tastic Food Truck, will be parked nearby and serve New York-style hot dogs (which includes vegan sausages) and a super fun dessert: cheesecake on a stick! Super Diner, a small traditional American restaurant, will serve Reuben sandwiches, made using a North American recipe that includes corned beef, cheese, sauerkraut, and a savory dressing, all grilled between slices of rye bread. 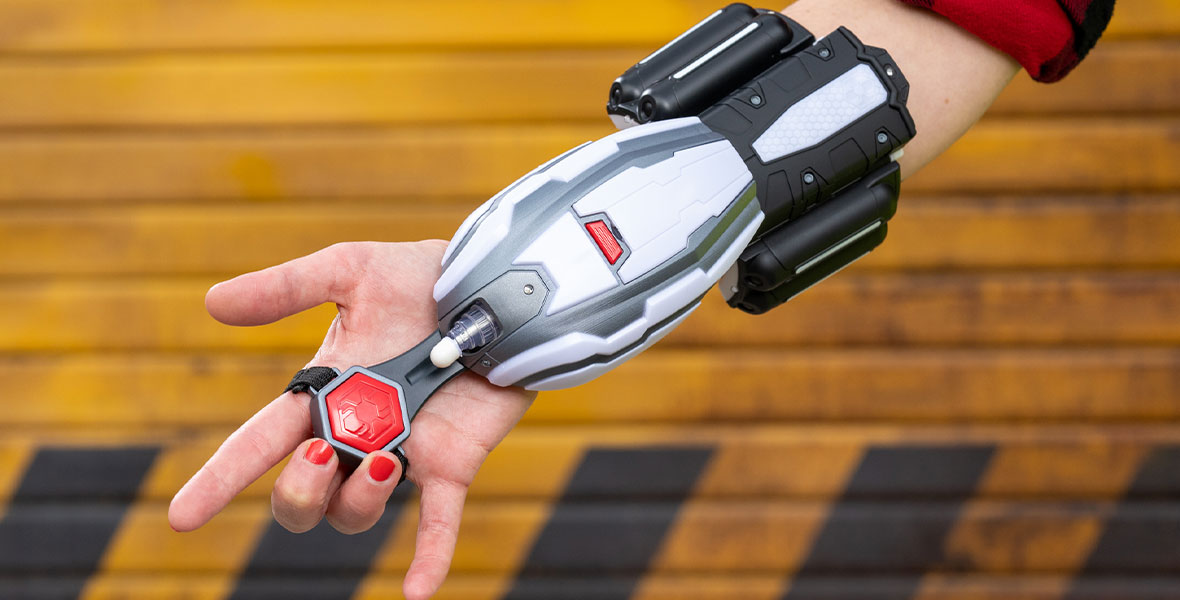 Show off your WEB pride and embrace your inner science whiz with apparel and specialty products available only at Avengers Campus at Walt Disney Studios Park.

Mission Equipment will offer official Avengers Campus and WEB (Worldwide Engineering Brigade) gear. WEB Tech accessories will make recruits’ experience even more special, as they can change recruits’ powers on an attraction to those inspired by fan-favorite Super Heroes—like Spider-Man with electro-dynamic webs, Iron Man with repulsor blasts, and Doctor Strange with Mystic Amplifier. Spider-Man W.E.B. Adventure, for example, is the first Disneyland Paris attraction allowing recruits to customize their experience onboard, using WEB Tech accessories. With the purchase of a WEB Power Band, recruits can access advanced functions like a multi-firing web option while battling Spider-Bots on the loose inside Spider-Man W.E.B. Adventure.

Every Super Hero needs a friendly sidekick to help protect their neighborhood. Spider-Bots place recruits in the driver’s seat, allowing them to command their own Spider-Bot and battle opponents, with programmed combat and defensive abilities. Inspired by select Marvel Super Heroes, tactical upgrades change the overall appearance of a Spider-Bot and enhance its battle capabilities. These tactical upgrades are inspired by Iron Man, Black Widow, and Black Panther. Stay tuned for more upgrades in the future!

Disneyland Paris will offer the ultimate Marvel experience from sunrise to sunset for guests who stay at Disney’s Hotel New York – The Art of Marvel. Since the hotel opened in June 2021, the guest experience has reached the next level, with a holistic, 360-degree approach to storytelling, including the Super Hero Station—which will offer Heroic Encounters with Captain America and Black Widow as of the opening of Marvel Avengers Campus—and the Hero Training Zone, an outdoor field with dedicated areas for a variety of sports activities available for guests of all ages. With 350 pieces of artwork created by more than 110 artists from Europe and beyond—including 50 exclusive pieces—it is one of the largest publicly viewable collections of Marvel art in the world.