Everyone knows that before Mickey Mouse there was Oswald the Lucky Rabbit. But before there was Oswald there was a little cat named Julius, one of the first and most prominent characters created by Walt Disney for the Alice Comedies. And even before the Alice Comedies, the evolution of the character of Julius can be traced back to the cats that appeared in some of the Laugh‑O‑gram shorts—notably the eponymous star of Puss in Boots. 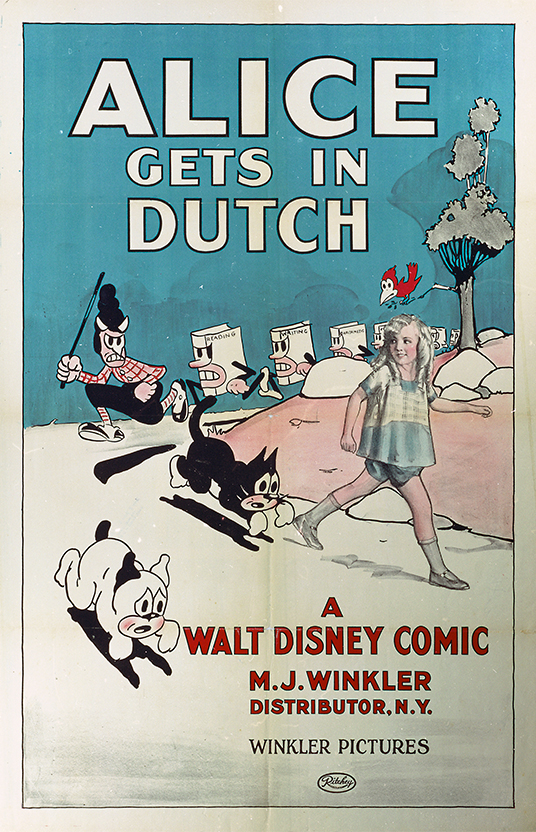 However, Julius’ real raison d’être was that Disney’s distributor Charles Mintz wanted the shorts to be packed with as many visual gags as possible. Alice was not a comic role—and anyway it would have been a bit much to expect seven‑year‑old children to take on the burden of being humorists. So, perforce, the shorts required a central comic character—and Julius provided this. 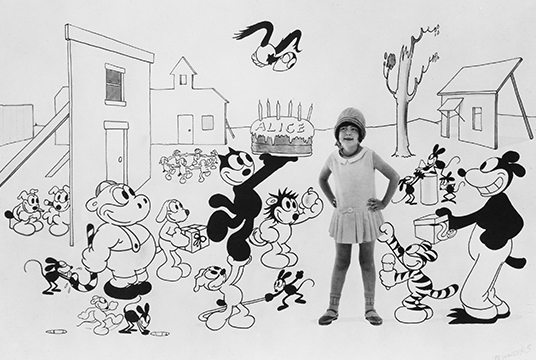 Not all of the Alice comedies survive, and in some cases we have only the vaguest idea of their contents; it is therefore difficult to provide any sort of definitive account of Julius’ career. However, we can look at a few representative performances of this cheery little cat. 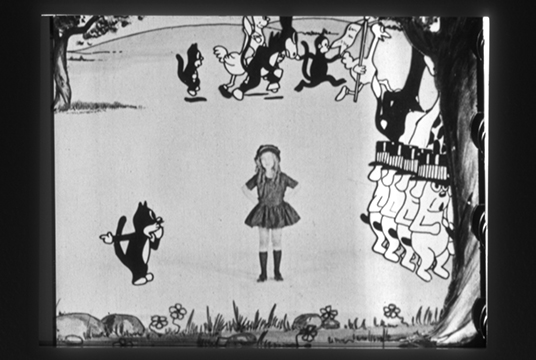 Although a prototype had appeared in Alice’s Wonderland, the first of the shorts in which we know that he featured was Alice’s Spooky Adventure (1924). In the live‑action preliminaries Alice climbs into a reputedly haunted house in order to retrieve a lost ball. After a few spooky creakings the short moves into animation, and we find ourselves, along with Alice, in “Spookville”. Up runs a little ghost shouting: “Help! Take it off!” Alice obliges by removing his “dustsheet” and he is revealed as Julius—a mighty grateful Julius at that. “Fair one,” he says, “you have saved me from the life of a spook!” 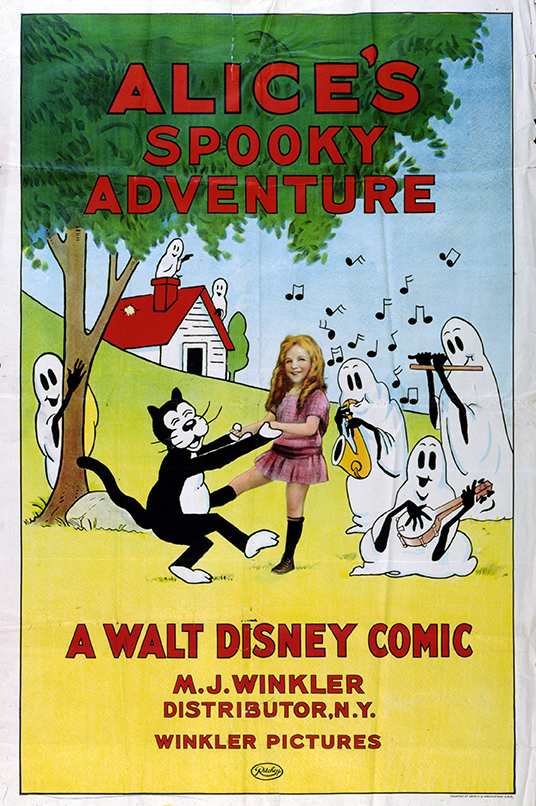 He takes her to an open‑air concert in Spookville, and they dance enthusiastically together. However, such innocent jollification cannot last for long when Julius is around. Nearby some ghosts are sitting playing mah‑jong when Julius lands on their table and wrecks the game. They react with perhaps excessive fury, and chase the cat and his new friend. But these two are not without their own resources: at one stage Julius pulls off his own tail and uses it as a club (the cat in The Four Musicians of Bremen was capable of the same trick); while Alice shows ingenuity by pulling down from above her head a cartoon exclamation mark and likewise using it as a club. After she has knocked out all the angry ghosts Julius swears his eternal love for her and we return to live‑action. Alice wakens to find a pussy cat licking her hand—an experience that startles her. She drives it off, but soon afterwards is arrested by the police for housebreaking. We leave her sitting forlornly in jail: there’s no Julius in real life to help her get out of this one! 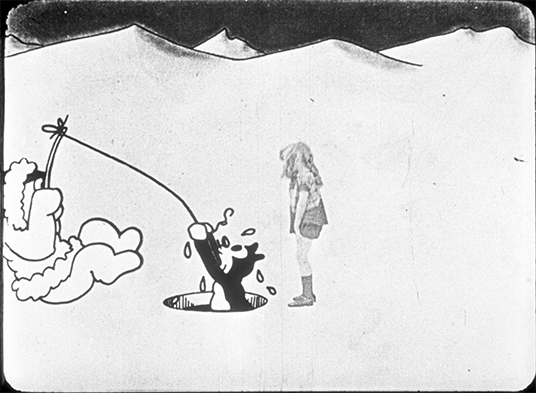 Julius’ tail is certainly a versatile implement, as he proves in Alice’s Fishy Story (1924). We find him at the North Pole where, as he discovers from the newspaper (“GREAT FISH SHORTAGE,” screams the headline), there is a crisis among the Eskimos because the fish have gone on strike and refuse to bite. Ever anxious to help, he uses his tail first as a corkscrew to cut through the ice and then as a fishing‑line—but the fish are not as stupid as all that and refuse to bite. An aggressive swordfish takes the issue one stage further by cutting a circle in the ice around Julius’ feet so that he plunges into the icy waters. After being chased by a huge and enthusiastically carnivorous fish, Julius is lucky enough to be hauled back out again through a hole in the ice by a friendly Eskimo. It is at this stage that he meets up with Alice, who suggests that they could raid the conveniently nearby wreck of the Hesperus to get some chewing tobacco. This done, Julius drops the tobacco in through a hole in the ice and the fish swallow it. As they leap up through the hole to spit the offending stuff out, Julius uses that versatile tail of his to club them unconscious. Millions of fish later, the problem of the starving Eskimos has been solved. 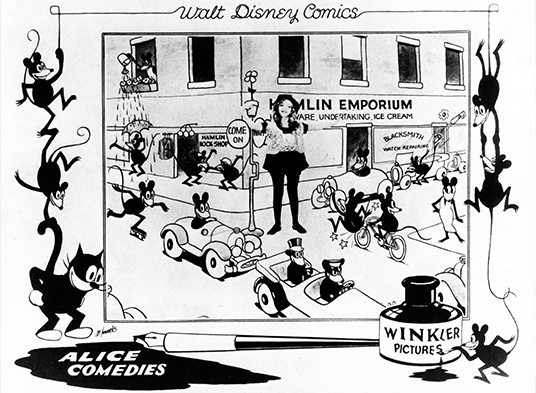 Interestingly, in a short released only two months later, Alice the Peacemaker (1924), Julius does battle with a mouse that looks almost exactly like Mickey Mouse—except that this mouse, called Ike, has a full complement of fingers. Julius (here called Mike) rivals Ike in raiding the icebox. After the two of them have been forcibly ejected from home because of their persistent crimes, Alice arrives on the scene and persuades them to become friends. 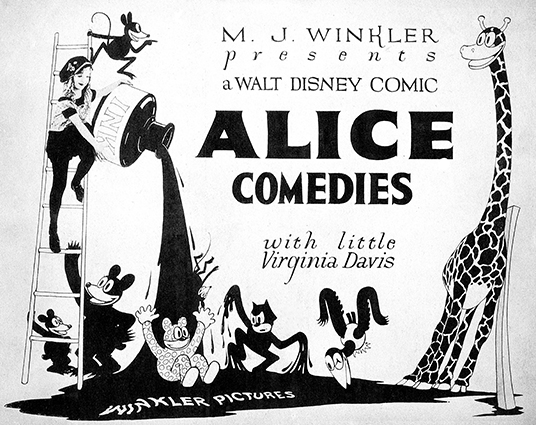 In the 1925 short Alice Chops the Suey Julius appears right at the beginning, in a scene reminiscent of a rival series (Fleischer’s Out of the Inkwell cartoons): he is drawn in piecemeal by a live‑action hand, and is joined on the screen shortly afterwards by Alice leaping out of a nearby ink‑bottle. In this adventure Julius is promptly “skinned” by a demon who emerges from the ink‑bottle; this demon, having flayed the cat, kidnaps Alice in a sack and runs off. Julius restores his dark coat by jumping into the ink and getting well and truly covered in it, and then chases off to rescue the little girl he loves. He saves Alice—still in the sack—from a pack of Chinese rats and, after a chase, indulges in a sword‑throwing contest with them. In the end he catches three of their swords and uses them together as a propeller in order to fly off, bearing Alice with him. 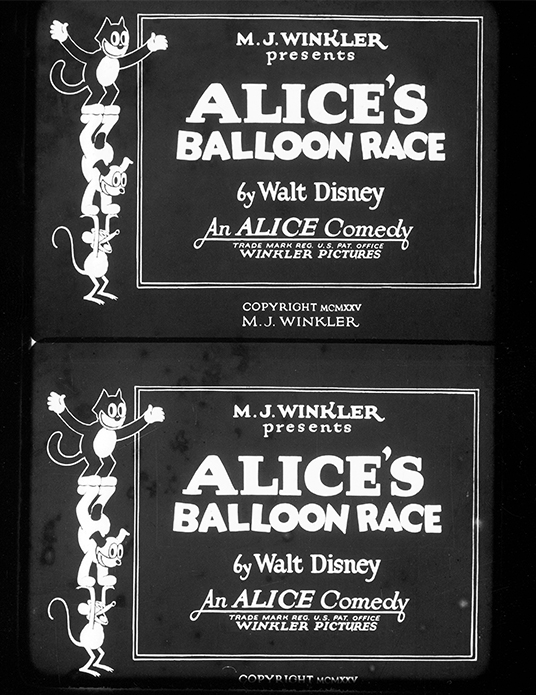 Julius did not survive the demise of the Alice series—unlike the character Pete, although Pete evolved into a character unrecognizably different from the one in these shorts. Another character of interest in the Alice comedies made his first appearance in Alice’s Wonderland: a little mouse drawn on an animator’s drawing‑board does some nifty fencing with a live‑action cat. More than one critic has seen this mouse as a prototype of the most famous Mouse of all.