Trouble has a way of finding Clint Barton.

Marvel Studios’ six-episode series Hawkeye will debut with two episodes on Disney+ on Wednesday, November 24, with two-time Academy Award® nominee Jeremy Renner reprising his role as the titular former Avenger. Inspired in part by the popular Marvel comic series by Matt Fraction from 2012-2015, the story begins with Clint and his kids visiting New York City to see Rogers: The Musical on Broadway. But plans to celebrate Christmas in the Big Apple are quickly canceled after a threat from his past returns. He sends his kids home and reluctantly teams up with Kate Bishop (Oscar® nominee Hailee Steinfeld)—a skilled archer and his No. 1 fan—to unravel a dangerous criminal conspiracy.

Hawkeye hinges on a single question, executive producer and Marvel Studios president Kevin Feige said at a press conference Tuesday: “Will Clint make it home for Christmas?” The series should come as “a breath of fresh air after world-ending stakes, Celestials bursting out of planets, and multiverse shenanigans,” Feige added. “This, like Hawkeye himself, is a grounded, family-based show.” To that point, director and executive producer Rhys Thomas added, “Clint’s family life is a unique aspect of his character, as we’ve seen through the history of the MCU. It’s a joy to explore that more and to see those relationships, because that anchors a lot of who he is.” 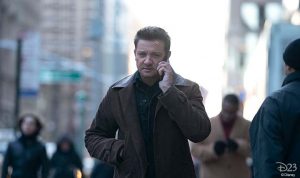 Marvel Studios always wanted to dig deeper with Clint, who made his MCU debut with a cameo in Thor (2011) and went on to appear in The Avengers (2012), Avengers: Age of Ultron (2015), Captain America: Civil War (2016), and Avengers: Endgame (2019). Months before Disney+ launched in 2019, Feige announced onstage at San Diego Comic-Con that they’d get to do just that. “It was always the intention to explore much more,” said Feige, citing Fraction’s writing as a “big tonal inspiration” for the series. “The character’s history is vast.”

That said, the circumstances of how Clint and Kate meet differ from the comics. Without spoiling anything, Clint tracks Kate down one night in the streets of Manhattan—and he finds her in a heap of trouble. Kate, who’s idolized him for more than a decade, can’t contain her excitement. “Kate sees Clint as someone who, despite his past, wants to do good and wants to help people,” said Steinfeld. “And that’s all she wants to do in life. She’s inspired and motivated by him. She wants to be at his level, and she is very overeager. Clint puts up with a lot, but Kate delivers at the end of the day.” Clint and Kate “can be polar opposites in a lot of ways,” Renner added, “but they have a lot of congruent values, belief systems, and skillsets. So, they have a wonderfully complicated relationship, friendship, and partnership.” 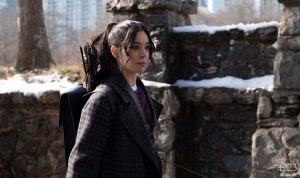 Hawkeye marks the MCU debut of Kate, 16 years after her first comic appearance. Vera Farmiga plays Kate’s mother, Eleanor Bishop, who is the CEO of a prominent security firm. “I love the very delicate and complex maternal relationship with daughters. It is a tricky sport, raising a successful daughter, especially when the daughter and the mom have different ideas of what that success means,” Farmiga said, adding, “We learn about who we are based on our relationship with our mommies: who we want to be and who we don’t want to be. That’s at the center of this. I think Eleanor sees herself as a kind of Super Hero. She is in the business of help, of keeping people secure. Having a daughter who is very powerful, who has a lot of prowess, but also a lot of recklessness? All mothers try to help their daughters channel that power into something more effective, and certainly that’s the big lesson for us. That’s how this starts off. Bridling beautiful energy is a mother’s task.”

Tony Dalton plays Jack Duquesne, Eleanor’s accomplished and wealthy fiancé. “Jack is sort of a family friend, and then he falls in love with Eleanor,” Dalton said. There may be more to him than meets the eye, though, said Dalton: “You don’t know where he’s coming from.” Like his character in the comics, Jack is a master swordsman. “I took some fencing, and we did a whole bunch of stuff with the stunts,” he said. “Everything was great. It was good fun.” 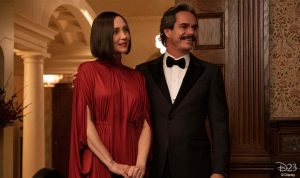 The cast also includes Fra Fee and Zahn McClarnon in undisclosed roles, and newcomer Alaqua Cox as Maya Lopez aka Echo. The fan-favorite character Lucky the Pizza Dog will also make his MCU debut in the series. “Well, if you’re going to do Clint and Kate, you have to do Lucky,” Feige said as the stars laughed. “That was that was pretty much a given.”

Amid all the action and comedy (of which there is plenty), there is an “emotional through line” that ties into Avengers: Endgame and everything that came before it, Renner said. Now, with Hawkeye, he hopes fans come away with an even deeper understanding of what Clint has endured. “Managing losses is the Super Hero game, and the lightness and brightness that Hailee’s character brings in kind of counteracts that,” explained Renner. “She comes in and he gets to level out some, so it’s pretty cathartic—and quite beautiful.”