The adventure beginneth! Disney and Pixar’s Onward is now available on digital and Disney+, and if you’re ready to explore more of that world, dive into Onward: The Search for the Phoenix Gem, an eBook about Sadalia, an ordinary teenage elf with big dreams! Join her as she investigates the truth about the Lightfoot brothers’ epic quest. A free download (available only in the U.S.) will be available April 3 through April 11. Before your literary journey starts, enjoy an exclusive excerpt of the first chapter below:

It. Was. Bonkers. ABSOLUTELY BONKERS.

Those were the only words Sadalia could think of to describe what had happened that day at New Mushroomton High School.

Sadalia Brushthorn was a sophomore, and she had a full course load. She was taking Alchemy, Realm History, and lots of other stuff that didn’t really hold her interest. But then there was journalism.

Journalism was her favorite. She had a nose for news. At least, that’s what her father said. He said she had the ears for it, too. “Elves like us have a keen sense of hearing. That’ll make you the best reporter to get the inside scoop!”

Sadalia’s hearing seemed average to her, but one thing of which she was certainly certain (she liked to say that a lot—“certainly certain”) was that she would have a career as a reporter one day. Even when she had been no bigger than a gnome, she had always asked, “Who? What? Where? When? Why?” and not necessarily in that order.

In fact, she already was a reporter, and she considered herself to be a pretty darn good one, too. In addition to honing her writing skills in her journalism class, Sadalia was a reporter for the school newspaper, The Fortnightly Dragon. It was considered to be biweekly, which implied that the newspaper came out once every two weeks, but for reasons she didn’t really understand, the paper came out three times a week.

When Sadalia asked the journalism teacher, Mrs. Nightdale, why that was, she laughed and said, “Who knows? It’s a mystery, wrapped in an enigma, then placed inside a conundrum and baked in an oven at three hundred and fifty degrees for thirty-five minutes. We’re certainly hot off the presses here at The Fortnightly Dragon!”

Sadalia had no idea what any of that meant. But she wasn’t complaining. More newspaper issues meant more writing opportunities. No one in her journalism class had volunteered more often or pitched more ideas than Sadalia. She was constantly looking for a story that would be her big break, one that would prove to everyone that she had what it took to be an honest-to-goodness newspaper reporter.

But most of the stuff that happened at school fell into one of two categories: boring, or really, really boring. Sadalia didn’t want to waste her time writing stories about the latest happenings of the Friends of the Unicorn Club (boring—plus, everyone knew unicorns were the most disgusting things in the realm), or interviewing the guy who fixed the drinking fountains (really, really boring). It didn’t help that not many exciting things went on in the quiet suburbs of New Mushroomton. But someone had to cover those things, to be sure, and it was usually her.

She just wanted that one big story—the one that would change her life forever.

Then one day, she got exactly what she wanted. And her life was never the same. 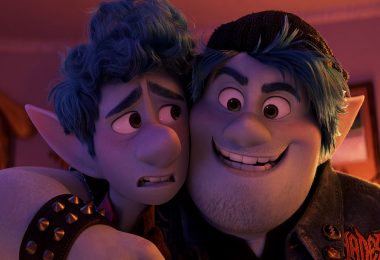 Everything You Need to Know About the Magical Characters of Onward