We’ve got our eyes on San Diego, California, this week as we eagerly await the start to Comic-Con International: San Diego 2016. But this morning, our hearts and minds are firmly rooted in Duckburg! Feast your eyes on this quackingly awesome new teaser art from Disney Television Animation’s upcoming DuckTales series.

The image was created by the production’s art team, led by Youngberg and Jimenez, and will appear on the back of DuckTales Cinestory Volume 1 comic—a collectible edition featuring a retelling of the first five episodes of the original DuckTales television show. The comic is being released first at Comic-Con today, July 20, and it becomes available in comic book stores nationwide beginning Tuesday, September 27.

DuckTales is set to debut on Disney XD in 2017. We’re hoping the time passes in a duck-blur. Woo-oo, indeed! 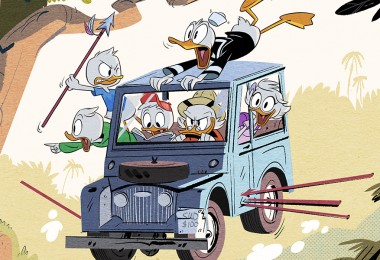