Howdy, folks! Welcome to the one and only original Country Bear Jamboree… soundtrack! Audiences have been clapping along to the rip-roaring attraction for almost half a century. Debuting as an opening day attraction in the Magic Kingdom at Walt Disney World Resort in 1971, the Country Bear Jamboree made its way over to Disneyland in 1972 and Tokyo Disneyland in 1983. This show is more than the technical marvels of 18 Audio-Animatronics® bears singing and swinging on stage, as it really comes down to the foot-stomping music and unique personalities of each character.

Long before this musical bear-venture was the fan-favorite it is today, the overall idea of what would inspire the Country Bear Jamboree started back in 1960 at the Olympic Winter Games. Walt Disney produced the pageantry for the games in Squaw Valley, California, which included the spectacular opening and closing ceremonies and all the entertainment in between. As the Chairman of Pageantry for the games, Walt Disney was given an Olympic Torch designed by Imagineer John Hench, which the Walt Disney Archives has preserved to this day. The wintertime experience in the peaks of Squaw Valley stuck with Walt and it helped spark an idea for a rustic and immersive guest experience.

Following the Olympic Winter Games in the 1960s, Walt Disney dreamed up an ambitious idea for a ski resort in the Mineral King area located in California’s Sequoia National Forest. Walt Disney Productions (today known as The Walt Disney Company) would then challenge itself to create, design, and operate the facilities while keeping the preservation of the area’s natural alpine beauty in mind. The unrealized resort would be a skier’s paradise complete with dining, lodging, and a conference center. An entertainment complex was included in the facility as an “Alpine Village” with a familiar concept of singing bears who had come straight out of the sequoias to entertain the resort’s guests. While the Mineral King resort never came to fruition, a good idea is never thrown away by Disney’s Imagineers.

The idea of lovable bears crooning country sonnets and plucking fiddles was a novel entertainment conceit that seemed to resonate with potential guests. Imagineer and Disney Legend Marc Davis conceptualized bears as tuba players, circus act bands, and “one-bear bands,” and from all those knee-slapping comedic gags and the jolly country-and-western cast of character designs, the centralized idea of what we know as the Country Bear Jamboree came to be. Imagineer and Disney Legend Xavier “X” Atencio conceived a country-themed script based on the popularity of country music in Florida at the time and developed the lyrics for the opening song, “Bear Band Serenade.” Additionally, animator and story artist Al Bertino rounded out the crew to help with timing and story pacing. Davis and Bertino worked together to discover and curate the rollicking country tunes that would fit within the show. Composer-conductor and Disney Legend George Bruns, who wrote the classic songs for Robin Hood (1973), Babes in Toyland (1961), and Zorro (TV, 1957–1959), conducted the Country Bear Jamboree soundtrack. An interesting nod to his musical career was the bear-friendly modified version of “The Ballad of Davy Crockett” which he had originally created for the three-part Davy Crockett television series that premiered on the Disneyland TV show, which was also later edited into the successful feature Davy Crockett, King of the Wild Frontier (1955). 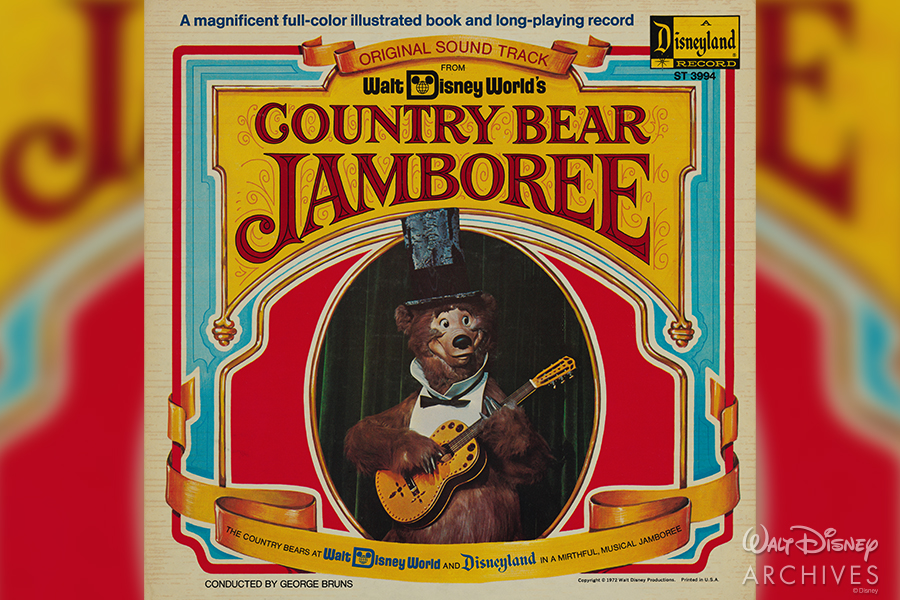 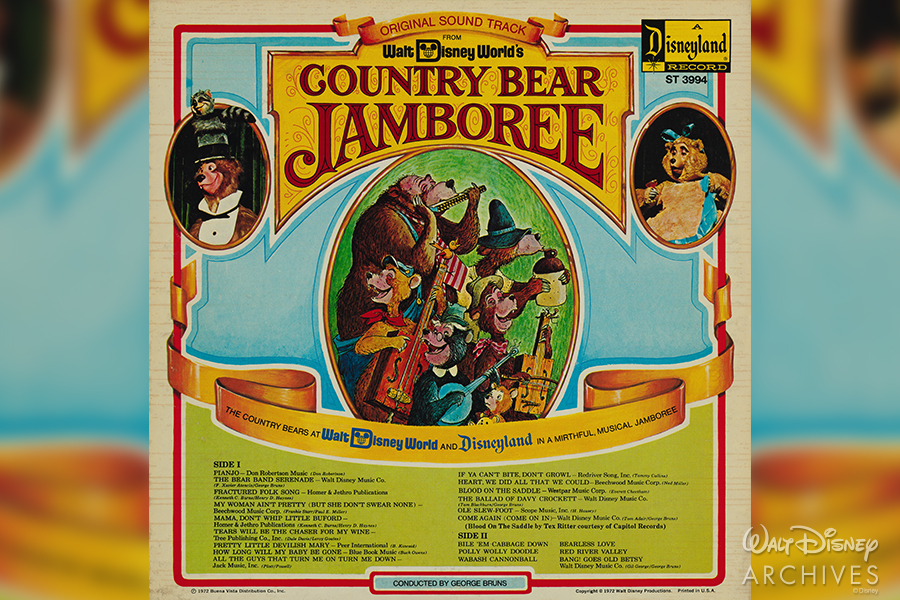 The talented voices behind the Country Bear Jamboree entertainers were a wide-ranging crew of critters. The master of ceremonies, Henry, and Max the stag were voiced by Pete Renaday, who also performed a plethora of Disney characters, from the captain on the Sailing Ship Columbia at Disneyland to Captain Nemo in 20,000 Leagues Under the Sea (1971–1994) and Abraham Lincoln in The Hall of Presidents (1993–2008) at the Magic Kingdom. Another familiar, burly voice comes from Buff the buffalo, played to delightful effect by Disney Legend Thurl Ravenscroft, whose familiar basso animates a singing bust in the Haunted Mansion and Fritz the parrot in Walt Disney’s Enchanted Tiki Room. Other notable voices were playback singer Bill Lee, who was also a member of the Mello Men, as Melvin the moose and Sammy the raccoon, actor Bill Cole as Wendell, and country singer Cheryl Poole as Trixie. A country music family band, The Stonemans, filled in various roles for the Country Bear Jamboree as Liver-Lips McGrowl, Ernest the Dude, and dimpled darling of the Dakotas, Teddi Barra. The Stoneman Family included Donna, Patsy, Roni, Van, and Jim Stoneman, and they performed as a sleuth of bears from Liver-Lips, Terrence, Ernest, and Teddi Barra. The Sun Bonnets from the Sunshine State are featured via the musical talents of singer Jackie Ward as Bunny, vocalist Loulie Jean Norman as Bubbles, and songster Peggy Clark as Beulah. The over-the-top, show-stopping bear Big Al finds his voice in legendary American country music singer Tex Ritter. Big Al’s notorious rendition of “Blood on the Saddle” comes from Ritter’s 1946 recording of the song. The souvenir record album contains the show in its entirety along with traditional instrumental songs like “Wabash Cannonball” and “Red River Valley.”

With all these incredible vocalists and the popularity of the attraction itself, a record album was an ideal way for the Country Bear Jamboree fan to take the “cele-bear-tion” home with them. The album included an 11-page booklet describing each character’s background and personality. The booklet revealed the many nicknames of the bears like Terrence, the “Vibrating Wreck from Nashville Tech.” The record album also expanded the lore of the Country Bear Jamboree with tidbits like Big Al being “born in a cave” near the Princess Theater in Pocatello, Idaho—which was the mythological birthplace of Esther Blodgett/ Vicki Lester (Judy Garland) in A Star Is Born (1954) who was “born in a trunk”—and the “5 Bear Rugs” band playing music together since the first grade.

Fans can still experience this E-Ticket attraction at both the Walt Disney World Resort and Tokyo Disney Resort, and excitingly, Tokyo Disneyland runs a seasonal version of the show named the Jingle Bell Jamboree that is not to be missed. Still, revisiting this original album is the perfect way to transport yourself to Grizzly Hall as the lights dim to sing along to the high-spirited ditties, allowing us all to clap our hands to some real ol’ country rhythm. As Henry says, “Thanks for bearing with us to the bear end” of this article and we hope you are inspired to take a listen to the nice slice of Americana that the Country Bear Jamboree record album offers.