Disney+ Day is just around the corner—and Disney+ is just getting started!

Ahead of Disney+ Day, The Walt Disney Company just announced new company-wide promotions and additional content premiering this Friday, November 12, to celebrate the Disney+ global community. To thank fans for their support over the past two years, Disney+ subscribers can enjoy special benefits such as additional time at Disney Parks around the world, shopDisney deals, access to fan-favorite content, exclusive first looks on platform, and more! For those looking to join the Disney+ community, from today through Sunday, November 14, new and eligible returning subscribers can get one month of Disney+ for $1.99. Fans are also invited to follow Disney+ on Facebook, Instagram, and Twitter, which will share sneak peeks at upcoming Disney+ movies and series starting at 6 a.m. PT Friday.

“Since launching two years ago, Disney+ has captured the hearts and imaginations of audiences around the world with its best-in-class originals and robust library of beloved films and series,” said Kareem Daniel, Chairman, Disney Media and Entertainment Distribution. “With Disney+ Day, we are creating an unparalleled experience for our subscribers as only The Walt Disney Company can.”

Celebrations from Disney Parks, Experiences and Products
In celebration of Disney+ Day, Disney+ subscribers with a valid ticket or pass and theme park reservation on Friday, November 12, will enjoy special benefits across Disney theme parks—in addition to some spectacular surprises! Disney+ subscribers and their travel party are invited to enter the theme parks at the Walt Disney World Resort and Disneyland Resort 30 minutes before the parks open. For even more fanfare, Disney’s Hollywood Studios at Walt Disney World Resort and Disneyland Park will roll out the blue carpet for guests with character moments, photo opportunities, and more. Disney+ subscribers will also enjoy complimentary Disney PhotoPass photo download(s) taken at select locations. 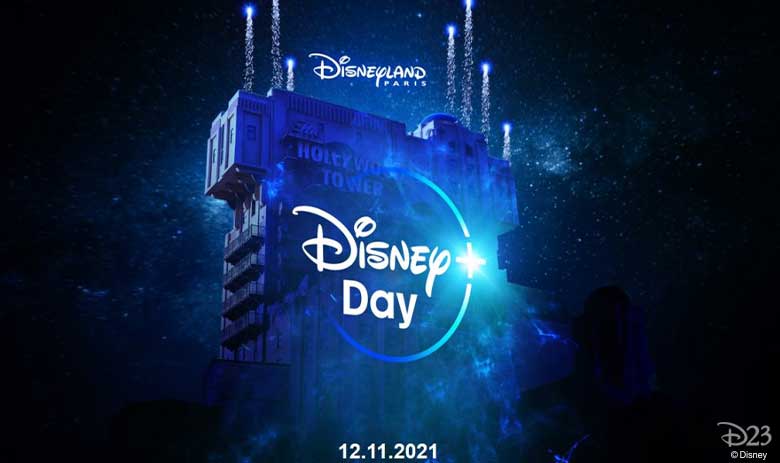 Disneyland Paris will also roll out the blue carpet at Walt Disney Studios for guests to celebrate with special character appearances and photo opportunities throughout the day. That’s not all! The park will also extend its operating hours by 30 minutes so that guests can enjoy watching The Twilight Zone Tower of Terror illuminate the night in Disney+ blue!

ShopDisney will offer free shipping in the U.S. and Europe from Friday, November 12, to Sunday, November 14, to subscribers of Disney+. Also starting today in the U.S., and for a limited time, shopDisney will roll out new customizable products from Disney, Pixar, Star Wars, and Marvel, including short sleeve and long sleeve T-shirts for kids and adults from Disney+ favorites like Loki, Luca, Raya and the Last Dragon, and Star Wars: The Bad Batch.

Disney Publishing Worldwide, meanwhile, will offer select $0.99 eBooks today through Wednesday, November 17. Fans can discover the stories behind their favorite Disney+ series, including High School Musical: The Musical: The Series, Loki, and The Mandalorian.

Disney will team up with Funko to offer an exclusive 10% off Disney+ products from Friday, November 12, to Sunday, November 14, on Funko.com and in their two retail locations: Funko HQ located in Everett, Washington, and Funko Hollywood, located in Los Angeles, California. Customers can use promo code DISNEYPLUSDAY on funko.com, and the discount will be automatically applied at checkout in-store. (Exclusions apply; see terms and conditions for details.) Star Wars fans can check out BringHometheBounty.com at 6 a.m. PT on Disney+ Day to see exclusive reveals of new Star Wars Funko Pop! Bobbleheads.

Additionally, Disney will team up with Target to host in-store activations on Friday, November 12, through Sunday, November 14, in almost 800 Target stores across the U.S. as part of a joint commitment to create new experiences for guests. Target shoppers will have the ability to sign up for the Disney+ Day offer and receive special giveaways.

From Friday, November 12, through Sunday, November 14, more than 200 AMC Theatres will celebrate Disney+ Day with four daily surprise screenings of fan-favorite movies. Each movie will feature a surprise short—and guests won’t know which movie is being shown until the screening begins! Tickets for these surprise screenings are $5 each, and guests will receive a free Disney+ poster and a special concession offer with their ticket purchase. A list of participating AMC locations can be found here.

Fans can find out what their favorite on-air talent from the Disney-owned networks are streaming on Disney+ in a series of spots featuring Anthony Anderson and his mother Doris Hancox (To Tell The Truth), Kelly Ripa (Live! with Kelly and Ryan), and Jesse James Keitel (Big Sky) on ABC; Yara Shahidi and Trevor Jackson (grown-ish) on Freeform; Peyton Manning (Peyton’s Places) with his daughter Mosley, along with NBA stars Brook and Robin Lopez on ESPN; Albert Lin (Lost Cities with Albert Lin) and Bear Grylls (Running Wild with Bear Grylls) on National Geographic; Sarah Paulson (American Horror Story) on FX; and Kat Dennings (Dollface) and Tamera Mowry-Housley (Baker’s Dozen) on Hulu.

The celebration will extend to local communities via ABC’s Owned TV Stations with original programming dedicated to Disney+ Day including special episodes of Localish and On the Red Carpet. Also, Good Morning America will celebrate live from Times Square on Friday, November 12, with special guests from Disney+ shows and spotlights on the coast-to-coast celebrations at Disneyland Resort and Walt Disney World Resort.

Disney+ Premieres, First Looks, and More
On Friday November 12, at 6 a.m. PT, fans can follow along with Disney+ on Facebook, Instagram, and Twitter for first looks, new trailers, exclusive clips, and stars of upcoming content from Disney, Pixar, Marvel, Star Wars, National Geographic, and in select international territories, Star. Disney+ subscribers will also be treated to exclusive on-platform specials from Pixar Animation Studios premiering at 8 a.m. PT and from Marvel Studios premiering at 8:45 a.m. PT, and other surprise sneak peeks.

Additional new and beloved fan-favorite content will make their Disney+ streaming debuts on Friday, November 12, including: 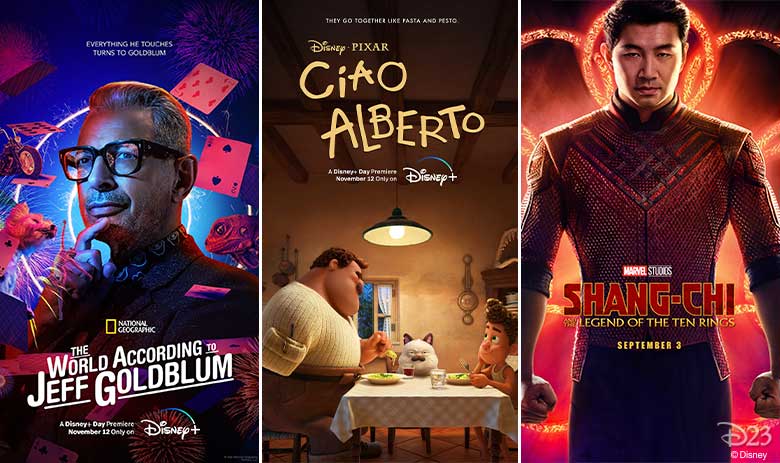 These titles join previously announced Disney+ Day premieres including: Shang-Chi and The Legend of The Ten Rings, Jungle Cruise, Home Sweet Home Alone, Olaf Presents, Frozen Fever, Paperman, The Ballad of Nessie, Feast, Get a Horse!, The Little Matchgirl, Tick Tock Tale, Tangled Ever After, Ciao Alberto, The Simpsons in Plusaversary, The World According to Jeff Goldblum, Under the Helmet: The Legacy of Boba Fett, Marvel Studios’ 2021 Disney+ Day Special, Entrelazados, and in international markets, Dopesick.

The 13 titles available at launch include the Disney+ premiere of Marvel Studios’ Shang-Chi and The Legend of The Ten Rings, in addition to Iron Man, Guardians of the Galaxy, Guardians of the Galaxy Vol. 2, Captain America: Civil War, Doctor Strange, Thor: Ragnarok, Black Panther, Avengers: Infinity War, Ant-Man and The Wasp, Captain Marvel, Avengers: Endgame, and Black Widow. (Content availability varies by region.) “Disney, Marvel Studios, and IMAX have collaborated for years to bring the world’s most popular films to the big screen, and on Friday we’ll start to bring IMAX technology to subscribers with IMAX Enhanced viewing in the Disney+ app,” said Michael Paull, President of Disney+ and ESPN+. “We’re thrilled to create new value for Marvel fans and audiences on Disney+, and we’re looking forward to offering even more IMAX Enhanced functionality in the future.”

Disney+ Day Limited Offer and Promotions
To celebrate the first two years of the service and all the new content to come, Disney+ is inviting fans to join the community with a special, limited time offer. From now until Sunday, November 14, new and eligible returning subscribers in the US and select countries can get one month of Disney+ for $1.99 (then $7.99/month) by signing up at www.DisneyPlus.com/DisneyPlusDay and join in on all of the Disney+ Day celebrations.

Fans can also tune in to the Disney+ Day celebration on TikTok, where Disney+ has launched an official account. The streaming service’s new TikTok will be home to unique short-form content featuring iconic Disney+ stories, brands, and characters. Follow @DisneyPlus on TikTok today for new content all week leading up to Disney+ Day!

Disney+ will pop up in cities around the world with larger-than-life icons and characters from its marquee brands. The activation kicked off in New York City today and will continue in Nashville on Wednesday, November 10, and Los Angeles on Friday, November 12.

Visit www.DisneyPlus.com/DisneyPlusDay to follow along all week as The Walt Disney Company comes together for Disney+ Day.

*Offer valid until 11:59 PM PST on 11/14/21. Valid only for new Disney+ subscribers and returning Disney+ subscribers with no current active entitlement, who are 18 years of age or older. Valid payment method required to redeem offer. Upon redeeming this offer, you will be enrolled in an auto-renewing monthly subscription of Disney+ and you will be charged the then-current retail price (currently $7.99/mo (plus tax, where applicable)) on a monthly basis beginning at the end of your 1-month promotional offer unless you cancel your subscription before then. Cancel anytime, effective at the end of your billing period. No refunds or credits for partial months. To accept this offer, create a Disney+ account, accept the Disney+ Subscriber Agreement, and select the monthly offer. Cannot be combined with any other offers, coupons, discounts or promotions. Not redeemable for cash or any other goods or services.