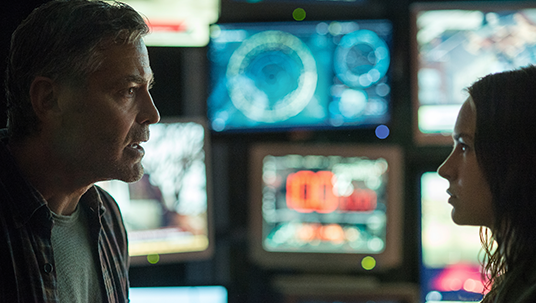 Tomorrowland (film)  An epic science-fiction film in which, bound by a shared destiny, a bright, optimistic teen, bursting with scientific curiosity, and a former boy-genius inventor, jaded by disillusionment, embark on a danger-filled mission to unearth the secrets of an enigmatic place somewhere in time and space that exists in their collective memory as Tomorrowland. What they must do there changes the world—and them—forever. Directed by Brad Bird. Released on May 22, 2015, in IMAX. Stars George Clooney (Frank Walker), Hugh Laurie (David Nix), Raffey Cassidy (Athena), Thomas Robinson (young Frank Walker), Britt Robertson (Casey). 130 min. Working title was 1952. Some filming, for a 1964 World’s Fair sequence, took place at Disneyland Park. Tomorrowland scenes were shot in part in the City of Arts & Sciences in Valencia Spain, and the wheat fields in Alberta, Canada.