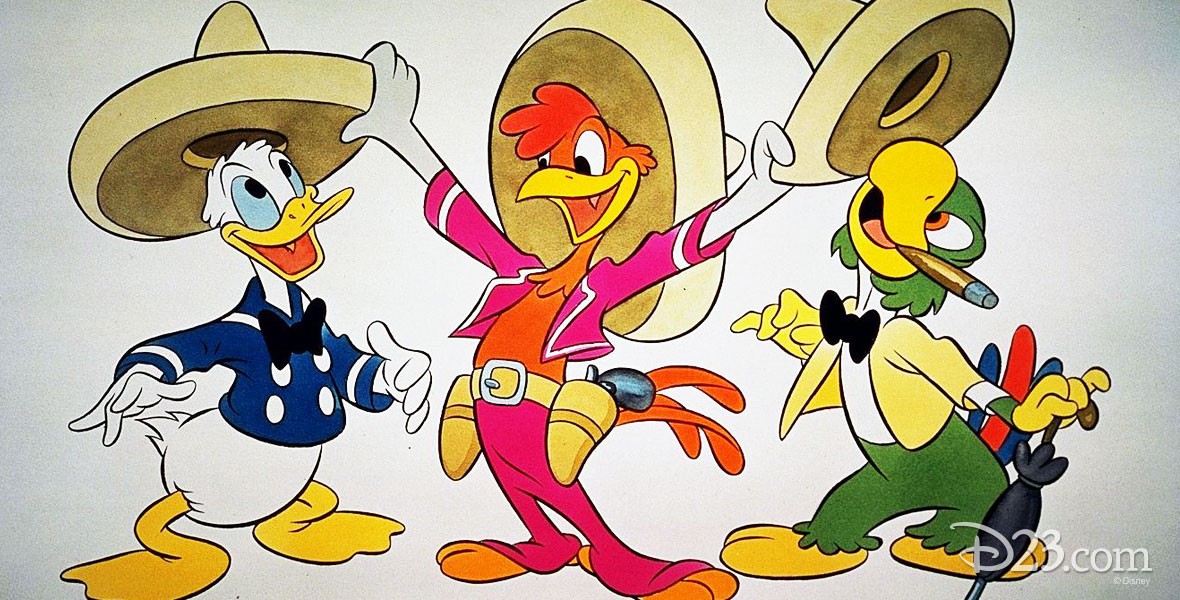 Three Caballeros, The (film) Four short films on Latin America, in a story about Donald Duck receiving birthday gifts from his Latin American amigos, José Carioca, the parrot, and Panchito, the Mexican charro rooster.  He unwraps a 16mm projector and views The Cold-Blooded Penguin about Pablo Penguin who flees the cold for a tropical isle and then misses the winter.  Then he views The Flying Gauchito, about a racing donkey with wings; Baia, in which Donald and José go to Baia, meet a cookie girl, and dance; and La Piñata, in which Donald learns of Las Posadas, the children’s procession before Christmas, and finds friendly shelter and the breaking of the piñata.  Interspersed throughout the film is live action of native dancing and Latin American songs.  The world premiere was in Mexico City on December 21, 1944; released in the United States on February 3, 1945.  Directed by Norm Ferguson.  71 min.  It was re-released in theaters in an abridged version in 1977 at a time when the film had gained increased awareness because of its almost psychedelic sequences.  Released on video in 1982.  Aurora Miranda, sister of Hollywood star Carmen, dances with Donald in the Baia sequence, showing how far the Studio had advanced the art of combining animation with live actors.  This is the first time Walt Disney had attempted incorporating live-action characters in an animated scene since the Alice Comedies in the 1920s.  Songs from the film include “You Belong to My Heart,” “Baia,” and “The Three Caballeros.”  Parts of the film were released separately as shorts and extracts appeared in the educational film, Creative Film Adventures, No. 1, in 1976.  The motion picture was nominated for two Academy Awards—Best Sound (C. O. Slyfield) and Best Scoring of a Musical Picture (Edward H. Plumb, Paul J. Smith, Charles Wolcott)