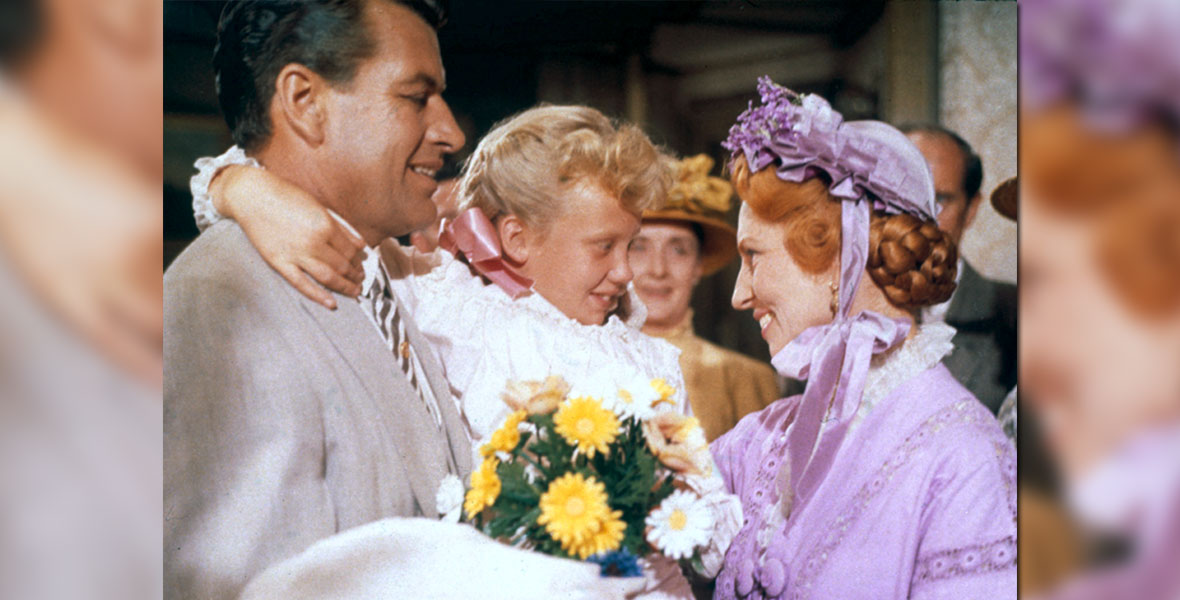 Pollyanna (film) Orphaned Pollyanna, coming to live with Aunt Polly Harrington who sternly runs her small New England town, brings her cheerful philosophy to the grim household and eventually to the whole town. With her “Glad Game” she intrigues Mr. Pendergast, an old hermit, who shows the kids his glass prisms and eventually decides to adopt orphan Jimmy Bean; coaxes Mrs. Snow, a crotchety hypochondriac, from her sickbed; teaches the Reverand Ford to stand up for himself; and reinstills a romance between Aunt Polly and Dr. Edmund Chilton. Under the girl’s influence, the town resists Aunt Polly, and stages its own benefit for building a new orphanage. Pollyanna is severely injured in trying to join the festivities, with the accident giving Aunt Polly a whole new outlook. It wins her the goodwill of the town and the love of the doctor who will restore Pollyanna’s health.  Directed by David Swift. Released May 19, 1960. 134 min. Stars Hayley Mills (Pollyanna), Jane Wyman (Aunt Polly), Richard Egan (Dr. Edmund Chilton), Karl Malden (Rev. Paul Ford), Agnes Moorehead (Mrs. Snow), Nancy Olsen (Nancy Furman), Adolphe Menjou (Mr. Pendergast), Donald Crisp (Mayor Karl Warren), Kevin Corcoran (Jimmy Bean). This was Hayley Mills’s first film for Disney, and she immediately became the Studio’s newest star. She won an Academy Award for the most outstanding juvenile performance of 1960. Wyman and Moorehead had earlier appeared together in Johnny Belinda, a film for which each was nominated for Academy Awards—Wyman won the Oscar. Based on the book by Eleanor H. Porter, published in 1913, which became perhaps the best-known American novel since Uncle Tom’s Cabin. It was so popular that the word Pollyanna even got into everyday usage, and eventually the dictionary, meaning someone who looks for the best in things. The film was director Swift’s first Disney feature, and, in fact he appears briefly as the fireman scolding Jimmy Bean. With a then lavish $2.5 million budget, Swift gathered a crew and cast unlike any other Disney live-action feature. Disney set decorator Emile Kuri was on hand, but outsiders Walter Plunkett (costumes), Russell Harlan (cinematographer), and art directors Carroll Clark and Robert Clatworthy came from established careers at other studios. To find a house to use as the residence of Aunt Polly, Walt Disney had to go far afield from his Studio in Burbank. An ideal house was found in Santa Rosa, near the famed Napa Valley. It occupied a full block in the center of the town, and was surrounded by spacious lawns and gardens. It was built in 1877 as a replica of an old Natchez, Mississippi, antebellum house. The vintage train station and water hole were also filmed in Santa Rosa, but the interiors were completed at the Disney Studio. The film was released on video in 1982 and 1993. For television productions, see The Adventures of Pollyanna, along with Polly and Polly—Comin’ Home.