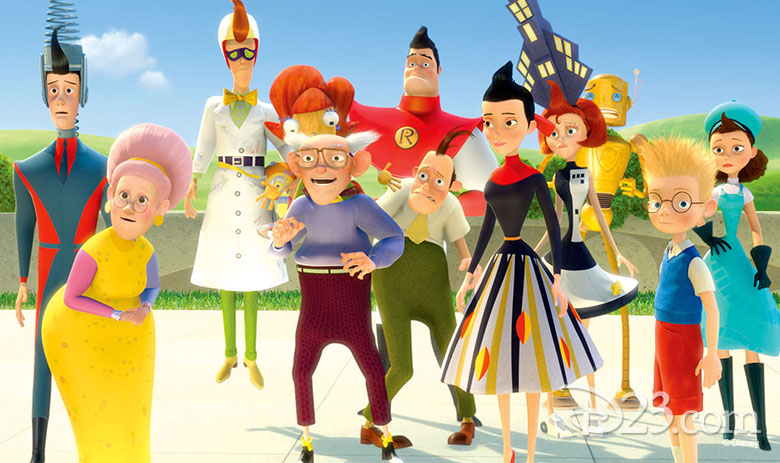 Meet the Robinsons (film) A CG-animated feature. Lewis is a brilliant twelve-year-old with a surprising number of clever inventions to his credit. His latest and most ambitious project is the Memory Scanner, which he hopes will retrieve early memories of his mother and maybe even reveal why she put him up for adoption. But before he can get his answer, his invention is stolen by the dastardly Bowler Hat Guy and Doris, his diabolical hat and constant companion. Lewis has all but given up hope in his future when a mysterious boy named Wilbur Robinson whisks him away in a time machine and the two travel forward in time to spend a day with Wilbur’s eccentric family. In a world filled with flying cars and floating cities, they hunt down Bowler Hat Guy, save the future, and uncover the amazing secret of Lewis’s future family. Released on March 30, 2007, in a regular version, and in Disney Digital 3-D on more than 600 screens. Directed by Stephen Anderson. Voices include Angela Bassett (Mildred), Daniel Hansen (Lewis), Jordan Fry (Lewis), Tom Kenny (Mr. Willerstein), Harland Williams (Carl), Adam West (Uncle Art), Laurie Metcalf (Lucille Krunklehorn), Wesley Singerman (Wilbur), Stephen John Anderson (Bowler Hat Guy), Ethan Sandler (Doris/CEO/Spike/Dimitri), Tom Selleck (Cornelius), Nicole Sullivan (Franny). Anderson, the director, not only did the voice of the Bowler Hat Guy, but also Grandpa Bud and Tallulah. Two actors were needed to voice Lewis—Daniel Hansen began recording the voice in 2003, but as he grew and his voice changed, the producers had to find another kid, and they were lucky to find Jordan Fry, a young actor who sounded much like Daniel. 94 min. Based on the book A Day with Wilbur Robinson by William Joyce; Disney had originally acquired the book in order to make a live-action feature but the animation staff saw great possibilities in it for animation. Danny Elfman provided the score.