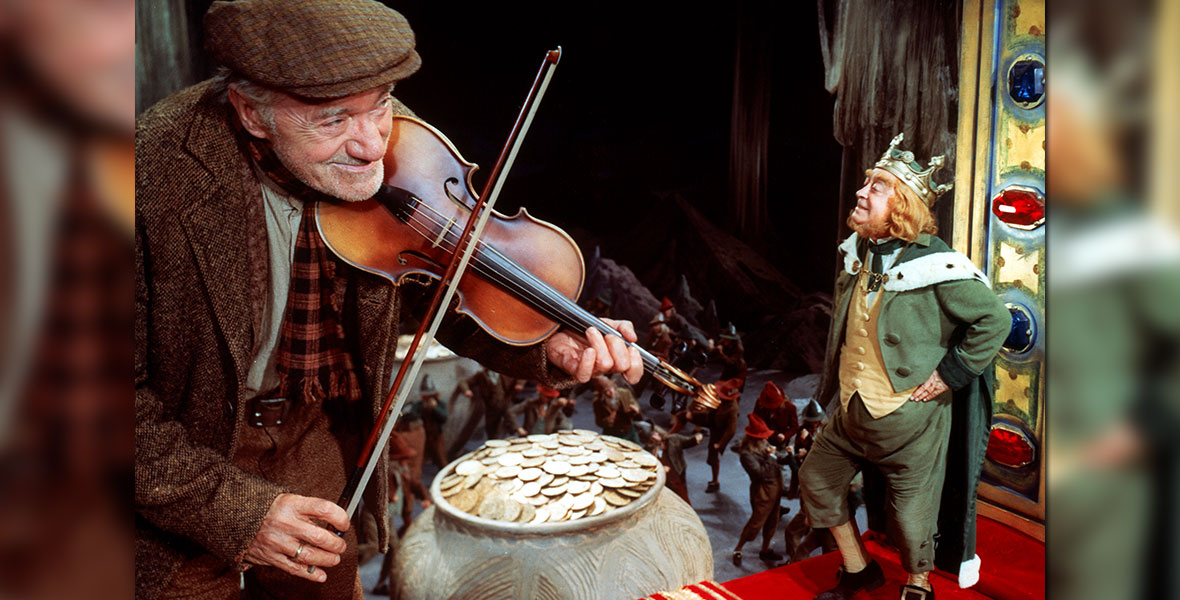 Darby O’Gill and the Little People (film) Darby O’Gill, used to spinning fairy tales instead of tending his job as caretaker of Lord Fitzpatrick’s estate in South Ireland, is about to be replaced by young Michael McBride of Dublin. Fearful of his daughter Katie’s reaction and unwilling to give up his own standing in the community, he attempts to act as matchmaker to Michael and Katie to ensure their future. To help his plans, he captures his old friend King Brian of the leprechauns, who must grant Darby three wishes. King Brian is almost successful in furthering a romance when meddlesome Pony Sugrue, a jealous townsman, tells Katie of Michael’s new job. In a rage, she renounces Michael and runs off after a runaway horse, only to fall and hit her head on some rocks. Near death, she is saved only when Darby diverts the dreaded Costa Bower, the Death Coach, by making his third wish to be taken instead. Inside the coach King Brian tricks Darby into making a fourth wish, which cancels out the previous ones, and sends Darby back to earth. Michael and Katie are married, and Darby is once again free to tell his tales of his little friends, the leprechauns. World premiere in Dublin, Ireland, on June 24, 1959; U.S. release on June 26, 1959. Directed by Robert Stevenson. 90 min. Based on H. T. Kavanagh’s Darby O’Gill stories, the film stars Albert Sharpe in the title role, with co-stars Janet Munro (Katie O’Gill), Jimmy O’Dea (King Brian), Sean Connery (Michael McBride), Estelle Winwood (Sheelah), Kieron Moore (Pony Sugrue), Walter Fitzgerald (Lord Fitzpatrick). With this film Janet Munro was signed to a Studio contract, but for Connery it would be three years before stardom would come with the James Bond series. The movie was director Stevenson’s first major production, and on the strength of this assignment, he went on to direct many of the Studio’s biggest hits in the 1960s. The film’s production at the Studio began in the mid-1940s when Walt Disney discovered the stories, and in 1946 he sent artists to Ireland for background material, following himself soon afterward. He had a fondness for the country because his ancestors had come from there. The songs “The Wishing Song” and “Pretty Irish Girl” were written by Oliver Wallace and Lawrence E. Watkin. With the aid of lavish matte shots, the film was shot entirely in California. To film the forced perspective of the leprechauns’ throne room, there was a need for huge sets, lit by many banks of lights, necessitating the building of an entire new soundstage at the Disney Studio. Special effects masters Peter Ellenshaw, Eustace Lycett, and Joshua Meador concocted the magic of the leprechauns and their appeal was undeniable. Leprechaun means “little body” in Gaelic, and according to legend they are 21 inches tall, usually dressed in grass green, 5,000 years old, and immeasurably wealthy. Walt Disney dedicated the film, in the opening credits, to these very believable Little People: “My thanks to King Brian of Knocknasheega and his leprechauns whose gracious cooperation made this picture possible.” The movie features one of the scariest scenes ever to appear in a Disney movie—the wail of the hideous Banshee and the arrival of the dreaded Costa Bower. A television show to promote the film, I Captured the King of the Leprechauns, starred Walt Disney and Pat O’Brien. The motion picture was reissued in 1969 and 1977. Released on video in 1981 and 1992.