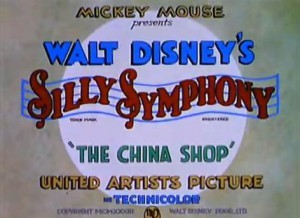 China Shop, The (film) Silly Symphony cartoon; released on January 13, 1934. Directed by Wilfred Jackson. As a shopkeeper closes his store for the night, his china pieces come alive; two figures dance until a china satyr runs off with the girl. The boy figure manages to save her and destroy the satyr, but also damages most of the store’s pieces. When the resourceful owner arrives next morning, he sees all the damaged items and changes his sign to read “Antiques.”