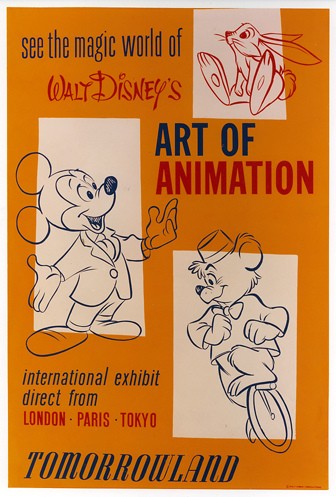 Art of Animation, The Tomorrowland display at Disneyland, from May 28, 1960 to September 5, 1966. Walt Disney created this display after making Sleeping Beauty, showing the history and development of animation and utilizing elements from Sleeping Beauty to explain the actual animation process. Two travelling versions of this exhibit went on tour throughout the United States beginning in 1958 and to the Far East and Europe. Author Bob Thomas wrote a useful book, entitled The Art of Animation, explaining the animation process and also using Sleeping Beauty as a basis. There was really nothing to compare with the exhibit until the Animation Tour opened at Disney-MGM Studios in 1989, 23 years later. Also, an attraction on Main Street, U.S.A. at Hong Kong Disneyland, opened August 31, 2008, and replacing The Disneyland Story-How Mickey Mouse Came to Hong Kong. Shows the stages of animation.

Art of Animation Resort, Disney’s Art of Disney, The