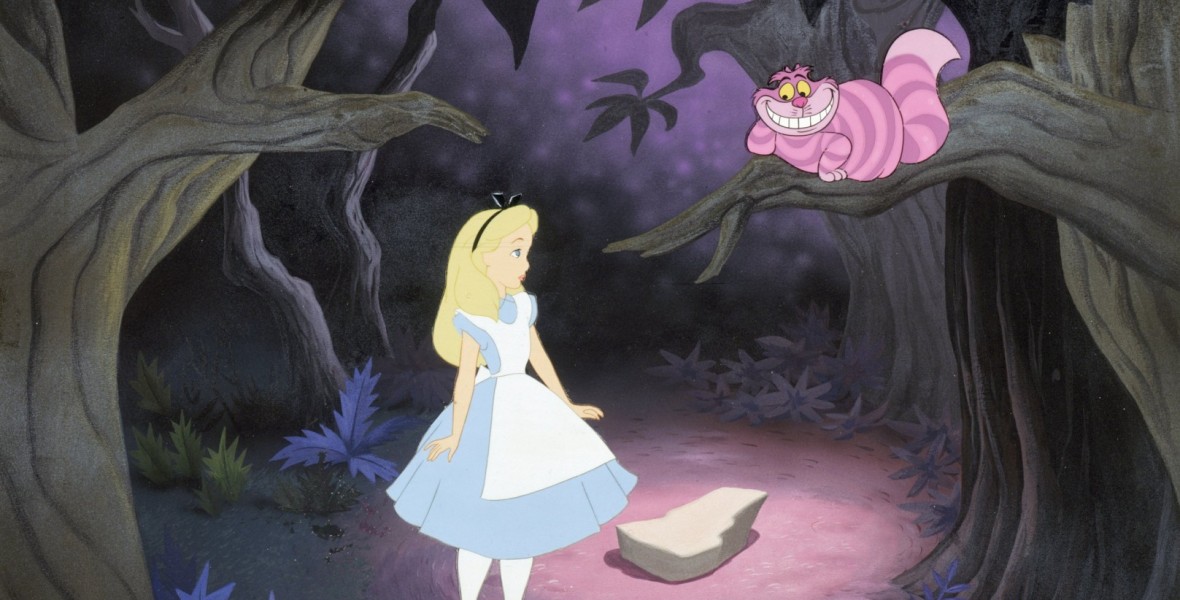 Alice in Wonderland (film) Animated version of Lewis Carroll’s famous story of Alice and her adventures after falling down a rabbit hole. Following a White Rabbit, she meets such strange creatures as a talking doorknob, who helps her through a keyhole into Wonderland, Tweedledum and Tweedledee, who tell the story of “The Walrus and the Carpenter,” the Caterpillar, and the Mad Hatter and the March Hare celebrating an unbirthday at their tea party. Finally Alice has a showdown with the Queen of Hearts and her army of playing cards. The whole thing becomes such a nightmare that Alice awakens from her dream to the recitations of her sister and the purring of her cat, Dinah. Alice is voiced by Kathryn Beaumont. Other voices include Verna Felton (Queen), Bill Thompson (White Rabbit), Ed Wynn (Mad Hatter), Jerry Colonna (March Hare), and Sterling Holloway (Cheshire Cat). Premiered in England on July 26, 1951 and released in the U.S. two days later. Directed by Clyde Geronimi, Hamilton Luske, and Wilfred Jackson. Songs include “All in the Golden Afternoon,” and “I’m Late,” by Bob Hilliard and Sammy Fain, and “The Unbirthday Song,” by Mack David, Al Hoffman, and Jerry Livingston. 75 min. Nominated for an Academy Award for Best Scoring of a Musical Picture. This animated feature had been on Walt Disney’s mind since 1933, when he considered a live action version starring Mary Pickford. He shelved the project after Paramount made a version, but later had artist David Hall, a Hollywood artist and designer, create some concepts for an all-animated film. World War II intervened, and it was not until the late 1940s that work began again in earnest. One of Walt’s big problems with this film was that here he was dealing with a highly regarded classic, and what was charming and appropriately bizarre in book form seemed oddly out of place on the motion picture screen. Walt’s feeling, expressed in later years, was that Alice had no “heart.” An edited version aired on television on November 3, 1954. The film was rediscovered by the psychedelic generation, when it was made available on 16mm for schools, and it was rereleased in theaters in 1974 and 1981. Released on video in 1981 and 1986 and kept in release.