Much like her character, Scarlett Johansson knows how to keep a secret.

But last week, she graciously offered an unredacted look at Natasha Romanoff’s ledger when she joined Black Widow co-stars Florence Pugh, Rachel Weisz, and David Harbour, plus director Cate Shortland and producer Kevin Feige, for a virtual press conference moderated by ESPN’s Sarah Spain. Before the film releases July 9 in theaters and on Disney+ with Premier Access (in most Disney+ markets), we unearthed five things you need to know about the first film in Phase Four of the Marvel Cinematic Universe (MCU). 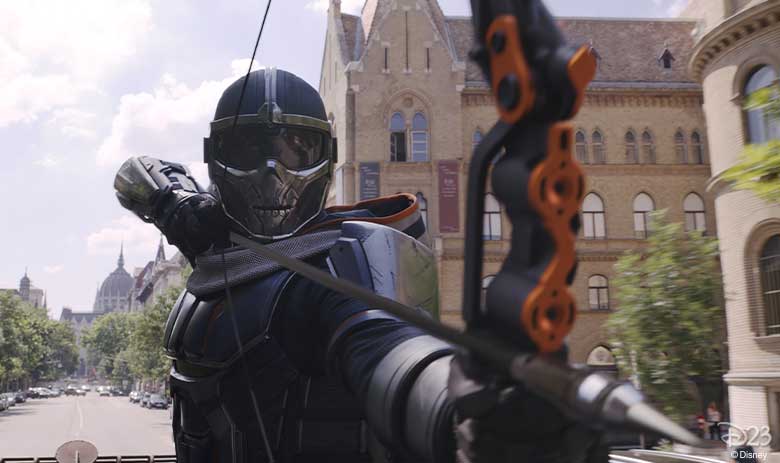 1. The ghosts of Natasha’s past continue to haunt her.
Set after the Avengers’ breakup, Natasha’s world is further upended when a dangerous conspiracy with ties to her past arises. “There was a large period of her life we didn’t know about—not just her childhood, but this period of time between Civil War and Infinity War,” said Feige. “And that period, we felt, was right to creatively focus on, to be able to discover more about her past, more about her present, and give a hint at the at the legacy and the future, all at the same time.” Shortland said she wanted Natasha’s story to feel like a “really exhilarating” fairground ride, while also feeling very raw: “We wanted it to be both.” 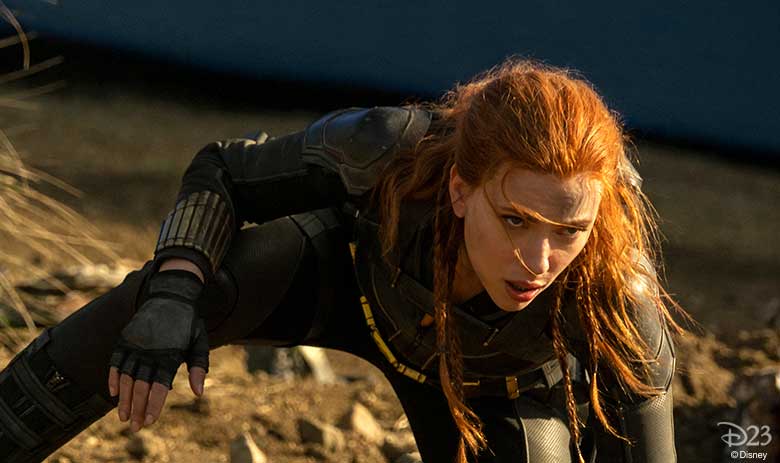 2. Natasha’s principles are what set her apart in the MCU.
After six onscreen appearances as Natasha, Johansson went into Black Widow knowing her character inside and out. After all these years, what she loves most about Natasha is her virtue. “She has a lot of integrity,” said Johansson. “She’s a big character, and she’s not afraid to admit when she’s wrong. She’s kind of endearing that way. She’s curious about herself and about other people—and I think that makes her stand out, as superheroes go.” 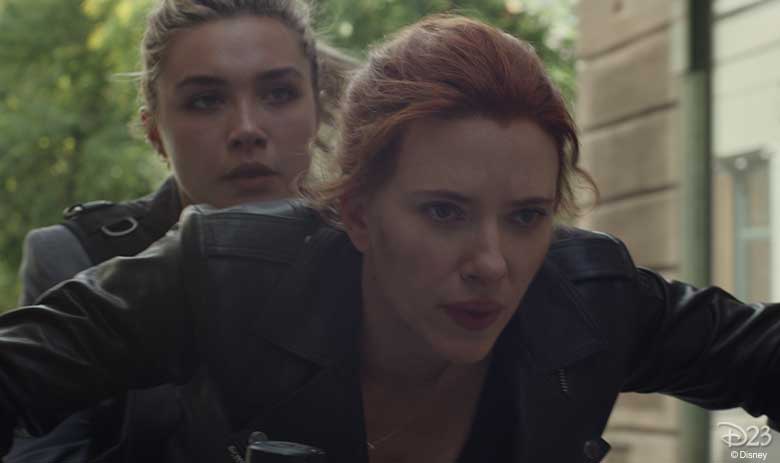 3. Yelena and Natasha’s sisterly squabbles hit different.
Pugh joins the MCU as Yelena Belova, a product of the Red Room’s ruthless training program. Broken and outspoken, she has a complicated relationship with Natasha, to put it mildly. It wasn’t difficult for Pugh to get into character, as her first day of filming involved a passionate fight scene opposite Johansson’s character. “I was throwing Scarlett up against a wall and she was smashing my face in a sink,” Pugh recalled with a laugh. “There is no greater way to break the ice than wrestling Scarlett Johansson to the floor.” The fight is “driven by emotion,” Johansson added. “There’s no real end goal there; it’s just two people expressing their frustration, their power struggle, and their genuine surprise and affection for one another. It’s like two lion cubs. It was such a unique way to bond with another actor, but it also felt like a very safe way to do it.” According to Shortland, the fight scene was filmed amid a heat wave in Budapest. “We kept having to stop shooting. It was like a microwave oven,” Shortland said. “It was great watching these two women fight and make it look effortless. They’d stop, we’d hose them down, and then we would put them back in.” 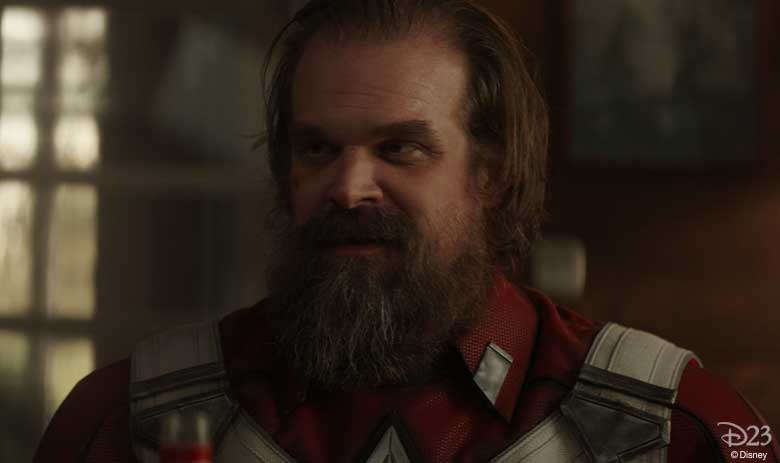 4. Alexei refuses to believe his glory days are behind him.
The Red Room’s answer to Captain America, Harbour’s Alexei Shostakov aka the Red Guardian is a super soldier and spy who lived a lifetime of triumph during the Cold War. Alexei’s years of espionage are behind him, but he still considers himself the ultimate hero. “He is filled with grief and remorse about the choices that he’s made—emotionally, spiritually, nutritionally,” Harbour said. “The comedy itself comes out of the ego that he’s built to defend against the feelings of that remorse. In other words, he has to be so bombastic because he can’t stop and feel these things, these failures, so he has to build himself a confabulatory, psychotic reality where he is the hero—and that’s inherently silly.” 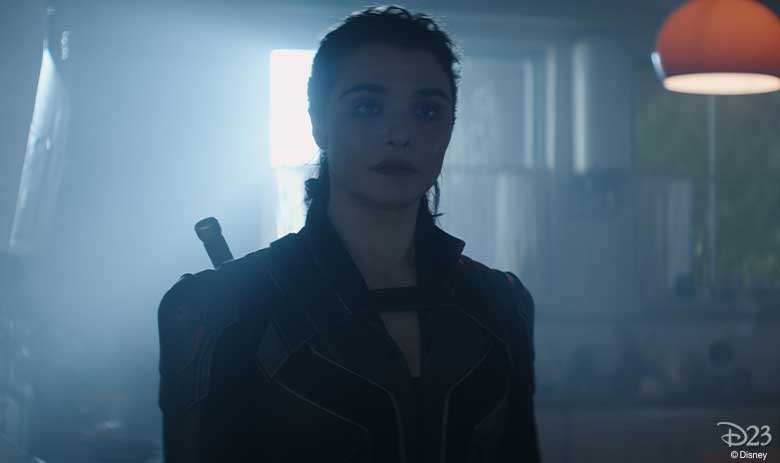 5. The Red Room has done a number on its Black Widows.
Melina, played by Academy Award® winner Weisz, is a highly trained spy who has been cycled through the Red Room’s Widow program four times. After various undercover missions, she became one of the Red Room’s lead scientists. Now living on a pig farm in Russia, she’s surprised when Natasha, Yelena, and Alexei show up on her doorstep. She must now decide where her loyalty lies. “I just thought she was a really unusual character,” said Weisz, also making her MCU debut. “This was really unlike anything I’ve ever done, and it felt incredibly intimate, incredibly emotional. I had to steel myself most days to stop laughing at David Harbour, because he’s one of the most eccentric, original, funny people on this planet.” Unlike Weisz, Melina isn’t so easily charmed. “What I liked about Melina was that she has absolutely no sense of humor—like, none—which possibly makes her quite funny sometimes,” she said. “People are many things, and what the writers got onto the page, and what Cate directed, were highly complex people who are very contradictory.” 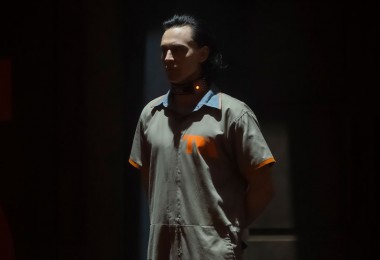