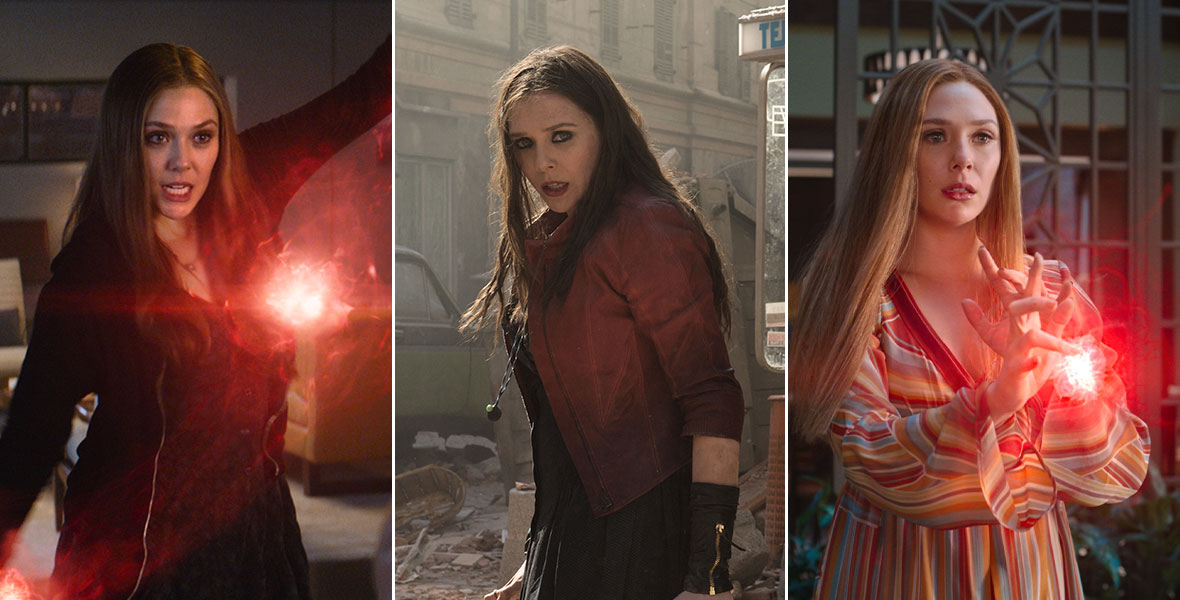 Debuting in a mid-credits scene for Marvel Studios’ Captain America: The Winter Soldier, the character—played by Elizabeth Olsen—went on to appear in four feature films and star in one limited series. Olsen reprises her role again in Doctor Strange in the Multiverse of Madness, now playing exclusively in movie theaters. In celebration of her return, we’ve rounded up and ranked her top 10 MCU moments before her latest adventure! We don’t want to spoil the events of Doctor Strange in the Multiverse of Madness, but there are plenty of moments in the film that will definitely crack the top 10. After all, you never know what kind of magic Wanda will conjure up down the line...

10. Wanda brings down the block. (Captain America: Civil War)
Did Wanda mean to destroy a building in Lagos? Of course not. She merely tried to divert an explosion and wound up causing more destruction in the process. But it also marked the first time fans witnessed how powerful—and how dangerous—she really is.

9. Wanda refuses to accept reality. (WandaVision)
After Monica Rambeau infiltrated Westview, she befriended Wanda. Letting her guard down, Wanda opened up about her late brother, Pietro, prompting Monica to ask if he died because of Ultron—something she wasn’t supposed to know about. It soon became apparent that Wanda, in fact, knew more than she had let on. “You’re not my neighbor, and you’re definitely not my friend,” she told Monica. “You are a stranger and an outsider, and right now you are trespassing here—and I want you to leave.” She then sent Monica hurtling through town, outside of the barrier, effectively banishing her for knowing too much. The lesson here? Stay out of Wanda’s business!

8. Wanda becomes an Avenger. (Avengers: Age of Ultron)
It all comes down to choices. With the battle against Ultron underway in Sokovia, Wanda briefly felt overwhelmed, only to receive words of wisdom from Hawkeye. “It doesn’t matter what you did or what you were,” he told Wanda, who’d harbored resentment towards Tony Stark—and, by association, the Avengers—since childhood. “If you go out there, you fight, and you fight to kill. Stay in here, you’re good; I’ll send your brother to come find out. But if you step out that door, you are an Avenger. All right?” Not only did Wanda come out of hiding, but she went on to help the Avengers stop Ultron once and for all. As far as first impressions go, Wanda pretty much nailed it.

7. Wanda embraces the dark side. (WandaVision)
The Darkhold, aka the Book of the Damned, says The Scarlet Witch is not born, she’s forged... and she’s more powerful than the Sorcerer Supreme. Can you blame Wanda for wanting to read it?! And if the book also happens to contain a spell that might reunite Wanda with her twin sons, again we ask: Can you really blame Wanda?!

6. Wanda shows up for her sisters. (Avengers: Infinity War)
With the Chitauri army about to breach the barrier in Wakanda, Wanda left Vision’s side to aid the Avengers on the battlefield. Proxima Midnight thought she had Wanda all alone, but Black Widow and Okoye teamed up to take her down. Then, using her powers of telekinesis, Wanda literally removed Thanos’ child from the fight... for good!

5. Wanda goes mental. (Avengers: Age of Ultron)
Not everyone has time for mind games... but Wanda? She has all the time! Much like the audience, the Avengers immediately fell under Wanda’s spell. First, she gave Iron Man a waking nightmare in Sokovia. Then, she used the same trick to torment Captain America, Black Widow, and Thor in South Africa. Using her powers of mental manipulation, she finally turned Bruce Banner into the Hulk, sending him on a tear. As Loki can attest, it’s not easy to keep up with the Avengers—but Wanda did it with ease.

4. Which witch wins? (WandaVision)
After lying in wait, Agatha Harkness emerged as Wanda’s biggest threat yet: a witch who wanted to steal her chaos magic. But after accepting her destiny as The Scarlet Witch, Wanda managed to overpower Agatha and defiantly told her, “I don’t need you to tell me who I am.” So... who is she? Doctor Strange in the Multiverse of Madness just may answer that question.

3. Wanda makes an unthinkable sacrifice. (Avengers: Infinity War)
What does a Super Hero do when faced with an impossible decision? Only Wanda possessed the power to destroy the Mind Stone—and, with it, Vision. Captain America argued, “We don’t trade lives,” but as Thanos advanced on the Avengers, it became clear that Wanda had no other choice but to sacrifice the love of her life in order to save the lives of countless others. “If he gets this Stone, half the universe dies,” Vision reminded her. “It’s not fair. It shouldn’t be you, but it is. It’s all right. You could never hurt me. I just feel you." Fighting back tears, Wanda looked lovingly into Vision’s eyes as she blasted the Mind Stone to bits... only for Thanos to use the Time Stone to undo her heroic act, pluck the Mind Stone from Vision’s forehead, and turn Wanda into dust!

2. Wanda remodels Westview. (WandaVision)
Talk about the power of manifestation! Subsumed by grief, Wanda created the very home Vision had wanted them “to grow old in” together... that is, before Thanos destroyed him during the battle of Wakanda. Using chaos magic, Wanda erected a barrier around Westview, New Jersey—one that would give her and Vision a chance at happiness and protect them from the outside world. The only problem? Wanda’s Hex removed free will, so it wasn’t exactly happily ever after for anyone else.

1. Wanda gets her revenge. (Avengers: Endgame)
Wanda tried her best to protect Vision from Thanos during the battle of Wakanda, but she was no match for the Mad Titan. (In fairness, Thanos had just acquired the sixth and final Infinity Stone.) Five years later, after Wanda had been blipped out existence with half the universe, the Avengers brought her back to life. Wanda came back seeing red—literally—as she came face-to-face with Thanos and said, “You took everything from me!” What followed was a master class in productive anger. As Wanda walloped Thanos with finesse and furor, he all but admitted defeat as he directed his entire army to attack her. Thanos may not have remembered her, but Wanda made a lasting impression on him—and on fans, who got a glimpse at just how powerful she really is.