Home / News / D23 Exclusive / Tinker Bell and the Legend of the NeverBeast Animators: ...

In Disneytoon Studios’ latest release, Tinker Bell and the Legend of the NeverBeast, Pixie Hollow’s most famous fairy, Tinker Bell, is back, lending support to her good friend Fawn, an animal fairy always willing to break the rules to help an animal in need. But when that animal turns out to be massive and strange with glowing green eyes, “Gruff” is deemed unwelcome in Pixie Hollow; and a band of skilled scout fairies become determined to capture him out of fear he’ll destroy their beloved home.

. . . that animal turns out to be massive and strange with glowing green eyes

Actress Ginnifer Goodwin voices Fawn, and director Steve Loter is quick to point out, “You can feel the smile behind her voice.” But the film’s true scene-stealer is Gruff, the NeverBeast himself—a brand-new creature that might remind you of a rhino . . .  or he might remind you of a hippo. But, as the filmmakers explained to D23, he probably reminds you most of your own pet dog or cat; and it’s this adherence to reality that explains how Gruff manages to overcome his inherently beastly qualities and endear himself to Fawn—and the audience. 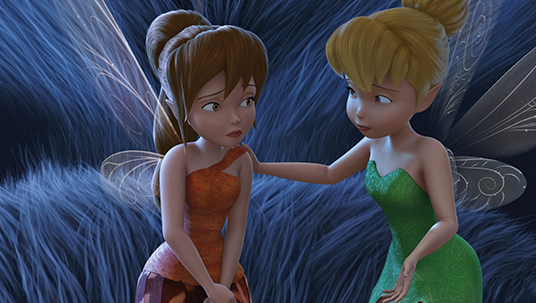 Gruff cuts an imposing figure when he and Fawn meet. But Gruff quickly puts Fawn—and the audience—at ease with the subtlest of gestures. The film’s producer, Michael “Makul” Wigert, observes, “I think there’s one moment where Fawn sees him for the first time in the cave and you see his ear twitch; and that just reminds you, ‘Oh, I’ve seen my dog do that. I can relax a little bit.’ So we wanted to use something like that sparingly, to remind audiences that it’s going to be okay.” The filmmakers provided this video of an animation test. Check it out and see if you recognize any of your own beloved pets’ characteristics:

According to Animation Supervisor Mike Greenholt—who has worked on all of the films in the Tinker Bell series—told D23, “One of the challenges that Steve gave us was that he wanted this animal to feel like an animal and not a person in an animal costume.” And for help facing that challenge, Greenholt found inspiration in the Disney classic Dumbo (which features a now-iconic character that doesn’t speak), as well as another unlikely source: his wife’s dog.

“You can see thought happening behind the eyes, and it’s not the way a human would react.”

And while we’re on the subject of eyes, Gruff’s are unusual, even for a NeverBeast. They’re a deep green and have the distinction of having no pupils. Story Artist Ryan Green—whose prior background in biology was an invaluable resource for the NeverBeast team—explains that Loter wanted a “glass ball feeling,” like two mirrors in which Fawn sees herself. The lack of pupils, Green says, means “Gruff doesn’t emote as much as an animal would that would have an iris and would look around, so his tail became a good way to show emotions,” in much the way that a housecat’s tail emotes for the animal.

Greenholt adds, “The moment you get a smaller pupil with white around it, it feels more cartoon-y or more human. We did tests where we had a smaller pupil and he suddenly looked like a man in a mask and it lost the animal quality to it.” The filmmakers had to rely on body language and story beats to get Gruff’s emotions and intent across, in much the same way that a certain other legendary animator did, Greenholt suggests. “When you look at the first Mickey Mouse cartoons, his eyes were black dots as well, and again, it relies all on the staging. You pose the character so it’s very clear where they’re looking.” The Muppets were also a great influence with respect to body language, Greenholt admits. “In some cases you’ll have puppets that just have button eyes and it all comes down to, how do they move? Can you move sad? Can you move excited? Can you move nervous? It’s just using all of that in your toolbox.”

But the animators were a little nervous their toolboxes weren’t equipped to tackle their biggest challenge: fur. “Fur is hard to do, even on a good day,” Greenholt confesses. And Green adds, “It’s amazing how much it could distract from the animal’s performance sometimes, where you just see nothing but hair moving everywhere. We had to be delicate with how much the audience notices it.”

Though modern technology and animation techniques allowed the filmmakers to give their CG NeverBeast hair that quite realistically evokes that of a yak, Greenholt is quick to tip his cap to animators of the past. “I think for me, my big influences are the “Nine Old Men,” the old animators: Marc Davis, Milt Kahl, Frank Thomas, Ollie Johnston. Every time I read about them or hear an interview with them, I’m always inspired because they really get into the mind of their characters and they think about what they’re doing.” He adds, “It shows, even after years have gone by, their stuff still looks good.”

And of course, the filmmakers all acknowledge there would be no Pixie Hollow had there not first been a Peter Pan. “One of the reasons I took this job was because growing up, I loved Peter Pan,” Greenholt states, adding, “Every time we do a new project—and even in the midst of it—I’m constantly watching Peter Pan, over and over again, trying to stay in that world, to try and keep the animation and the acting as close to those sensibilities as I can.” Wigert also stresses, “Peter Pan was such a fun character in that film. We absolutely respect that and want to live up to that legacy.”