Guests visiting Disneyland in the park’s first month thought for certain they had seen everything, but they never saw an elephant fly. That’s because the Dumbo Flying Elephants attraction opened one month later, on this day in 1955. To this day, the flying elephant continues to lift passengers above Fantasyland while they control the up and down movement. Walt tapped animator-turned-Disney-sculptor and Disney Legend Blaine Gibson to sculpt the Timothy Q. Mouse figure, which would conduct the elephants from high above the center ring. Blaine recalled a small mishap that occurred during the creation of the rodent ringmaster. “All of that stuff was done in just plain water clay and it has to be wrapped very carefully with plastic in a certain way. I came in and found that someone had opened my Timothy Mouse on top of the Dumbo ride and it was cracked because it dehydrates so I had to repair it.” Soon Blaine realized that it was a very enthusiastic co-worker who couldn’t resist a peek. “It was Walt (Disney) that came in, but he didn’t know quite what the art of keeping it sealed was. It didn’t bother me.” 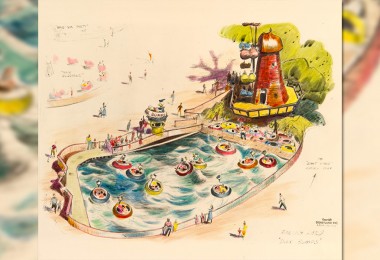