Home / News / Headlines / The Inside Scoop on Monsters at Work from the Cast and ...

It was a real Monster Mash!

The cast and executive producer behind Monsters at Work zoomed in together and spilled secrets about the highly anticipated new series that follows the daily adventures of Mike Wazowski, James P. “Sulley” Sullivan, newcomer Tylor Tuskmon, and a whole new gang of lovable, laugh-inducing monsters. Premiering July 7 on Disney+, Monsters at Work takes fans back to the not-so-scary streets of Monstropolis, home of Disney and Pixar’s 2001 film Monsters, Inc. and its 2013 prequel Monsters University. The timeframe of the series is the day after Mike and Sulley discover that harvesting children’s laughs produces far more energy than harvesting their screams.

Joining the zoom-for-all were Ben Feldman, the voice of Tylor Tuskmon; Mindy Kaling, the voice of Val Little; Billy Crystal, the voice of Mike Wazowski; John Goodman, the voice of Sulley; Henry Winkler, the voice of Fritz; and executive producer Bobs Gannaway. And even though this was the very first time all of them had been “together” at the same time, it seemed almost like a family reunion—and boy, did they have stories to tell!

Ben Feldman wasn’t exactly at ease when he first showed up to work on the series.
“It was horrifying to join this cast,” he says, not at all joking. “I look up to everybody here and feel like I somehow crowbarred my way into a room that I don’t belong in… Monsters was such an incredible iconic film—both films were so great—and I’d seen them a million times and I never expected that I would be in anything like this. I’m not someone that anybody wants to listen to or look at or hang out with. But because I stammer, I’m awkward, I’m a little neurotic—apparently that’s what Bobs was looking for. And so I feel like I slipped in the cracks and I couldn’t be more thrilled and more honored to be a part of this.”

Why Mindy Kaling loves her character, Val Little.
Kaling voices a brand-new character to the Monsters world, Val Little, a member of the Monsters, Inc. Facilities Team (aka “MIFT”). “I just love Val,” says Kaling. “She’s so enthusiastic and earnest and pure, and I normally play sociopaths, so that’s really nice. And I love visually how cute she is. I think her color palette is great. I love the pinks and the oranges and it matches her personality, which is really upbeat.”

Billy Crystal explains why Monsters, Inc. was the first of his films he could share with his grandchildren.
A comedy legend, Crystal has starred in projects as wide-ranging as City Slickers, The Princess Bride, Throw Momma From the Train, and Analyze This. But it’s his Pixar job that got him the most respect with his grandkids. “When Monsters, Inc. came out, my grandchildren didn’t really know what I did and frankly I was a little confused myself,” he says. “And then one day we were walking in a mall and paparazzi people came out and started taking pictures of me and my grandkids were freaked out and I had to explain to them what I did. And the first movie that they could see was Monsters, Inc., because, you know, When Harry Met Sally, I could not really explain to them why she was screaming in the deli.”

Why did Henry Winkler take this part?
When asked, “Why did you take this role,” Henry Winkler was quick to answer: “I was asked,” he deadpanned, but then explained, “Two great movies, Disney, Billy, John, and then I got to meet everybody else. So not necessarily in that order except for I was asked. It was great.”

Bobs Gannaway knew the show had to be a mix of nostalgia and new characters.
“From the beginning, my goal was to make sure the audience gets to go back to a place they love,” says Gannaway, referring to the first two Monsters films from Disney and Pixar. “So I worked very, very hard. And that’s why having Billy and John back was so essential—it wouldn’t be the same place without them. So I really wanted to make sure you get to go back to a place you love and spend time with friends. But then go places you haven’t seen. So we’re going back to the Rotunda, back to see Celia Mae, back to the Laugh Floor, but we also get to go down underneath the Monsters, Inc. facility and see the MIFT team—the monsters behind the monsters.” But when asked about the beloved Boo from the original film, Gannaway is unwavering: “Just to be very clear, Boo does not make an appearance in the series… The relationship between Boo and Sulley is so precious and so wonderful that we want to leave it to the world to have their own interpretation of how that relationship continued and not define it.”

John Goodman reveals what he wants fans to take away from the new series.
What does Goodman want fans to get from watching this new series? “Just to get reintroduced, go back into the world of it, escape into it,” he says with a smile. “It’s a great place to escape to… People have always come up to me and asked, what’s next, what’s going to happen, do you know?” 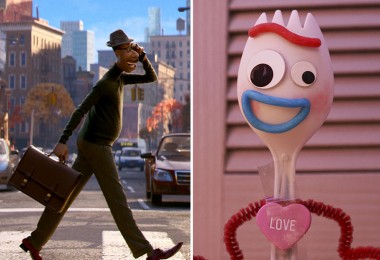