For the first time in forever, Epcot welcomes two exciting Frozen experiences to the Norway pavilion in World Showcase! These all-new attractions, which premiered June 21, serve as the latest example of what Walt Disney Imagineering does best: creating amazing environments and immersing guests in memorable stories.

In Frozen Ever After, guests are invited to step aboard an ancient Norwegian vessel for a voyage through a magical, wintry world—from the docks of Arendelle, through the frozen willow forest, past Troll Valley, and up to the icy blue world of the North Mountain, where Queen Elsa’s ice palace awaits. Our favorite Frozen characters and songs help make this “Summer Snow Day” an especially memorable adventure for guests of all ages. The celebration continues inside Royal Sommerhus, the summer cabin where Anna and Elsa have arrived for a special reception. It’s the perfect opportunity to snap a photo with the royal sisters and share a warm hug or two. 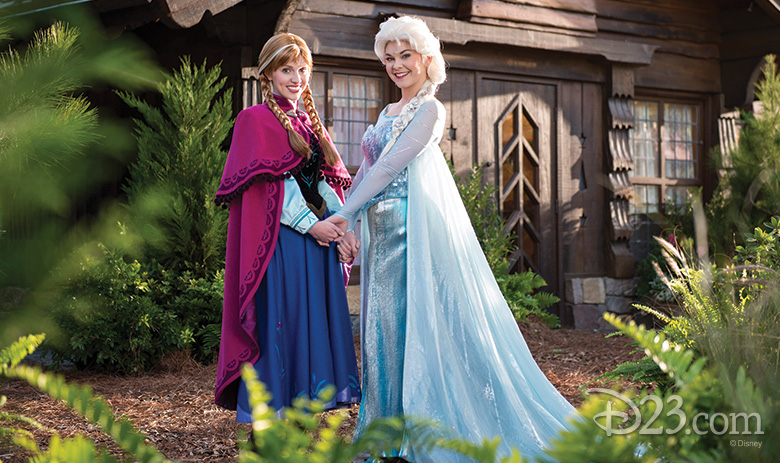 With so much to explore, D23 sat down with Michel Den Dulk, Executive Creative Director, Walt Disney Imagineering, to discover more about what Epcot fans can look forward to during their next visit to World Showcase. Here are a few fascinating things we learned that we know D23 Members will love!

Upon entering the Norway pavilion, Epcot regulars may be surprised to find new, expanded settings inspired by the Scandinavian country. “We’ve doubled the size of the pavilion, where the Stave Church is now the centerpiece, shining in the middle,” Michel shares with D23. “To the right of it, we have the city—the buildings of Norway—with the fortress where Frozen Ever After is housed. And to the left, we have the countryside, featuring a little village that offers some more flavors from Norway.”

During a research trip to the country, Michel observed something interesting that would influence the look and feel of the pavilion. “Norway really is this combination of the powers of nature—the roughness of the forest and the mountains,” he explains. “And then there are these little pockets of civilization that are squeezed in there—houses and villages built with natural materials in very remote locations.” These themes served as the foundation for some of the pavilion’s new designs, furthering the sense of authenticity World Showcase is famous for.

Keeping with World Showcase tradition, Imagineers have added more cultural flair and a variety of brand new details throughout the Norway pavilion. When asked for a favorite example, Michel points to a door at Royal Sommerhus that was inspired by the Delti House in Sverresborg. “I was very charmed by the combination of that house’s dark, natural aesthetic and the vibrant wood-carved portal at the entry. It was a beautiful combination that we tried to represent in the pavilion.” When you visit the cabin yourself, look for a special Frozen touch in a custom-designed pane found just above the door.

“We aimed for a subtle mix of the two big elements in the pavilion—Norway and Frozen,” Michel continues. “At the ice storage building by Frozen Ever After, there’s a little carved statue that’s a kind of representation of Kristoff and Sven. But since it’s outside, I deliberately wanted it to feel like it came out of the real world of Norway.” (Its inspiration was a small statue of a man holding an axe, which Michel noticed while visiting a colorful row of houses near Bryggen.) While these cultural touches may be relatively small in size, they each serve as a powerful testament to the Imagineers’ legendary approach to storytelling.

Bringing New Dimensions to the World of Frozen

The attention to detail continues throughout the Frozen Ever After attraction, where more than 15 advanced Audio-Animatronics® figures delight voyagers across 11 all-new, immersive scenes. “It’s such a wonderful, charming, musical experience where you get up close to your favorite Frozen characters,” Michel describes. “Sometimes very close!”

“Although everything seems familiar, it’s a very fresh approach with a few twists,” he notes. “The ride has some spectacular moments, especially when you see Elsa. Now that she’s in control of her magical powers, she can display it on Summer Snow Day and have fun with it. And there are characters we see who used to be fearsome and scary but are now friendly to us, like Marshmallow. He’s big and impressive—and yes, he will roar at us and cover us in a cold cloud of icy mist—but it’s all done with a smile. So that’s what I hope—that guests really come out of the attraction with smiles on their faces.”

New Melodies for the Epcot Songbook

“There’s something about music that touches people,” Michel says, referencing Epcot’s rich musical legacy. “I see music in our parks as having the same role in film. It brings you to a certain mood, connecting the dots, if you will, to a certain emotion.” And music now plays a bigger role in the Norway pavilion, where Imagineers worked closely with the original Frozen songwriters and voice talent to record new versions of beloved melodies for Frozen Ever After. In a few cases, lyrics to our favorite Frozen songs were tweaked ever so slightly to fit the attraction’s happily-ever-after storyline.

But the musical adventure begins before you even step foot in your vessel. “We did something really fun for the queue,” reveals Michel. “You’ll hear a beautiful, newly-composed selection that really reminds you of Norwegian folk music. Within it, you’ll come across new themes, and every now and then you’ll recognize rearrangements of the iconic Frozen songs, but done in a new and romantic way. It sounds wonderful!”

Imagineers also incorporated new music selections across the rest of the pavilion. “We came up with two different medleys: one for inside Royal Sommerhus and one for the outside that is exclusively traditional Norwegian folk music,” Michel continues. “We found some beautiful new tracks—some similar to what has played in the pavilion for many years and some of it new. But it all sounds very nice and fitting to the scenery.”

As Imagineers brought new magic to the Norway pavilion, they found room to include a few sly nods to an Epcot attraction of the past. “Both at Frozen Ever After and Royal Sommerhus, we have homages to the former Maelstrom attraction that I love,” Michel hints.

Of course, he’ll leave them for Epcot fans to discover on their own. “I’m sure our guests who love our product will not have a very hard time figuring out where and what those are, but I think they’re really cool details that pay tribute to the past.”

It all comes full circle, as Norway’s rich culture and heritage are celebrated at Epcot in a whole new way. We look forward to seeing you at World Showcase “in summer!”