For the Birds. Partly Cloudy. The Blue Umbrella. Lava. One of the joys of seeing the latest film from Pixar Animation Studios is savoring another one of their innovative shorts—and with The Good Dinosaur, that tradition continues. In Sanjay’s Super Team, longtime Pixar animator (and accomplished artist in his own right) Sanjay Patel draws on his own experiences to tell the story of a young, first-generation Indian-American boy whose love for western pop culture conflicts head-on with his father’s traditions. Little Sanjay is captivated by the world of cartoons and comic books, while his dad tries—in vain—to engage him in the customs of his ancestral Hindu practice. But when Sanjay finds himself immersed in an awe-inspiring adventure like he’s never imagined, he returns with a new perspective that the pair can both embrace. 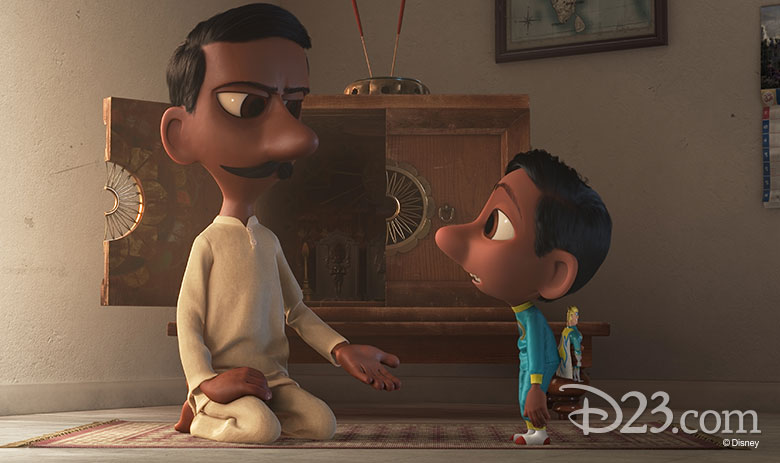 D23 recently spoke with first-time director Sanjay and Super Team producer Nicole Paradis Grindle about bringing this “mostly true” story to animated life. “I was really fired up to get this voice out there, to get the story out there,” Sanjay explains. “To be able to collaborate with [Chief Creative Officer, Pixar and Disney] John Lasseter and the team here at Pixar… to be able to communicate better with audiences, to expose them to a culture that they might not otherwise know anything about—I was fired up for that, for sure.” But getting Super Team to the screen took a somewhat circuitous route. “I’ve been at Pixar for 20 years,” Nicole says, “[and] Sanjay’s been here almost 20 years, too—but we never got a chance to work together. This [project] was refreshingly different—a different voice and a different perspective.” Sanjay’s colorful graphic novels (like The Little Book of Hindu Deities)—which he always kept separate from his Pixar work—led to a recent exhibition at San Francisco’s Asian Art Museum; fellow Pixar artists caught the show and insisted he bring the work to Pixar’s in-house gallery. “John saw it and was blown away,” Nicole explains. “He said, ‘Sanjay, you need to make a movie here.’ It was really satisfying helping somebody who was so new to the director role—figuring out how to get his vision realized.” 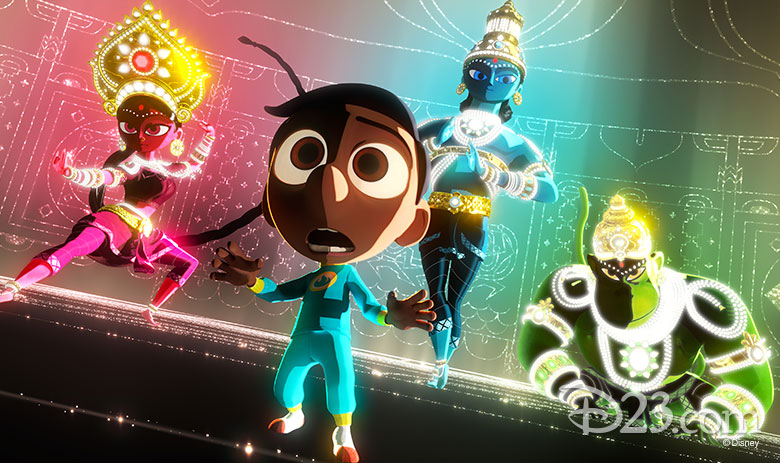