Because it’s officially the Halfway to the Holidays mark, our friends at Disney Parks, Experiences and Products gifted us with several cheerful announcements! Sure, it’s summer and the sun is shining—but make yourself a cup of cocoa and read on to discover all the exciting ways to celebrate the season in Disney parks around the world! 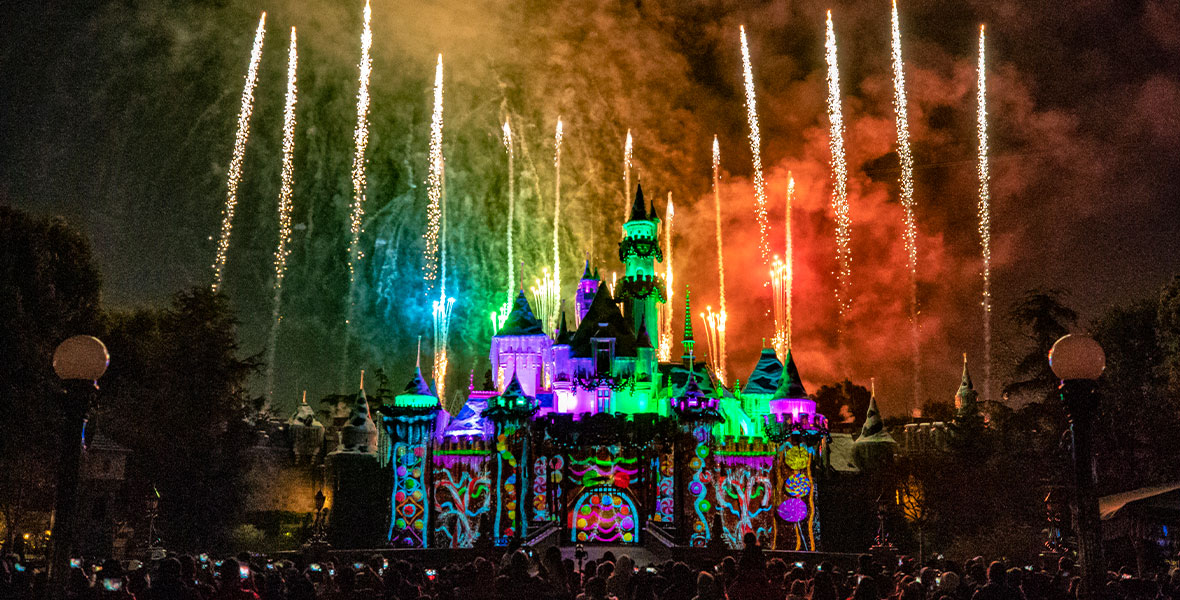 Two holiday nighttime spectaculars are coming back this year! Believe… in Holiday Magic fireworks is a dazzling nighttime display featuring a medley of heartwarming holiday music, culminating with a magical snowfall in several areas of Disneyland park, including Main Street, U.S.A., near the Rivers of America, and in front of it’s a small world. World of Color – Season of Light will return to Paradise Bay at Disney California Adventure park, blending classic holiday songs with memorable moments from cherished Disney and Pixar movies, illuminating a wall of mist while fountains dance.

The fan-favorite seven-foot gingerbread house in the lobby of Disney’s Grand Californian Hotel & Spa will also return this holiday season. A new annual take on a replica of the hotel, this festive tradition takes months for a 25-member team to create.

During the holiday season, encounter Disney characters wearing their holiday finest; shop for the merriest of merchandise; and enjoy seasonal entertainment and décor in the parks, in the Downtown Disney District, and in the Hotels of the Disneyland Resort. 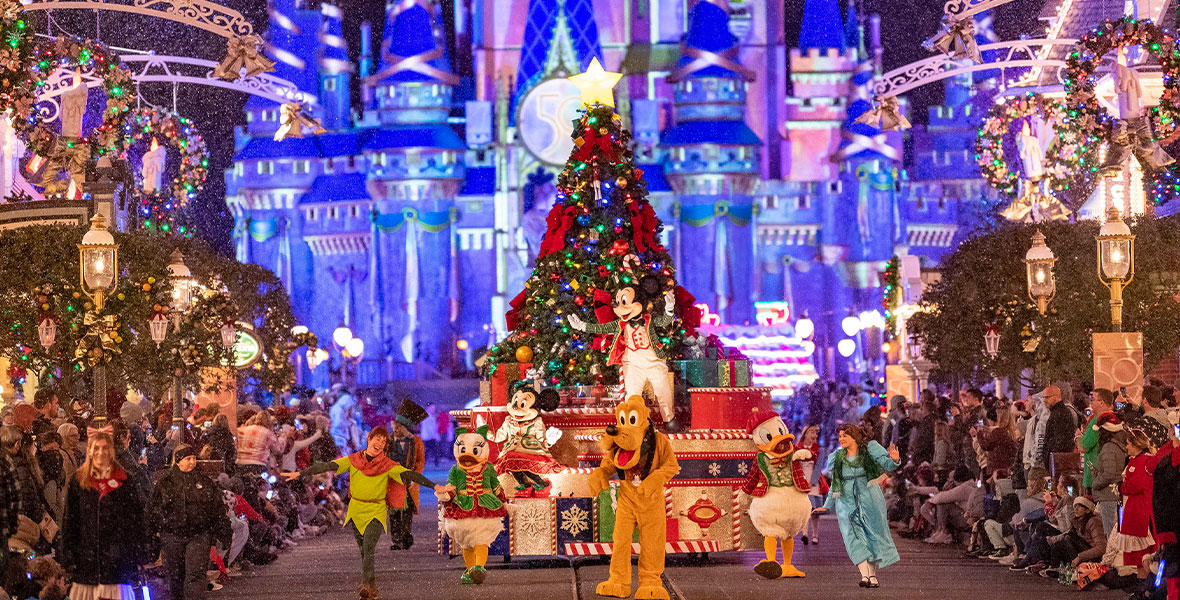 Unbox holiday cheer at Magic Kingdom park when Mickey’s Very Merry Christmas Party returns this year! On 24 select nights from November 8 to December 22, this separately ticketed event will invite guests to visit the park for a very merry evening!

Join Mickey Mouse and his pals at the Cinderella Castle stage for a must-watch Christmas extravaganza: “Mickey’s Most Merriest Celebration.” The show will feature nostalgic and modern medleys of holiday music paired with dance performances. In addition, Minnie Mouse will orchestrate a sparkling spectacle over Magic Kingdom park as a part of Minnie’s Wonderful Christmastime Fireworks. Full of holiday magic, the show will feature impressive castle projections, plus fireworks and seasonal music. And with his famous flying reindeer leading the way, Santa Claus will join Mickey and friends in the Mickey’s Once Upon a Christmastime Parade. Want something sweet? Guests can enjoy complimentary cookies and hot cocoa located throughout the park!

At Magic Kingdom, partygoers can dance the night away alongside Disney characters during an out-of-this-world holiday show, “A Totally Tomorrowland Christmas,” located on the Rockettower Plaza Stage. The fun will continue for young partygoers and for Disney Junior fans of all ages with the “Disney Junior Jingle Jam” at Storybook Circus.

During the Walt Disney World 50th Anniversary celebration, select theme park icons will continue to transform into Beacons of Magic, illuminating select nights with an EARidescent glow. And as a yuletide surprise, the magic will continue as each park celebrates the season with a rotation of unique heartwarming holiday-themed displays. 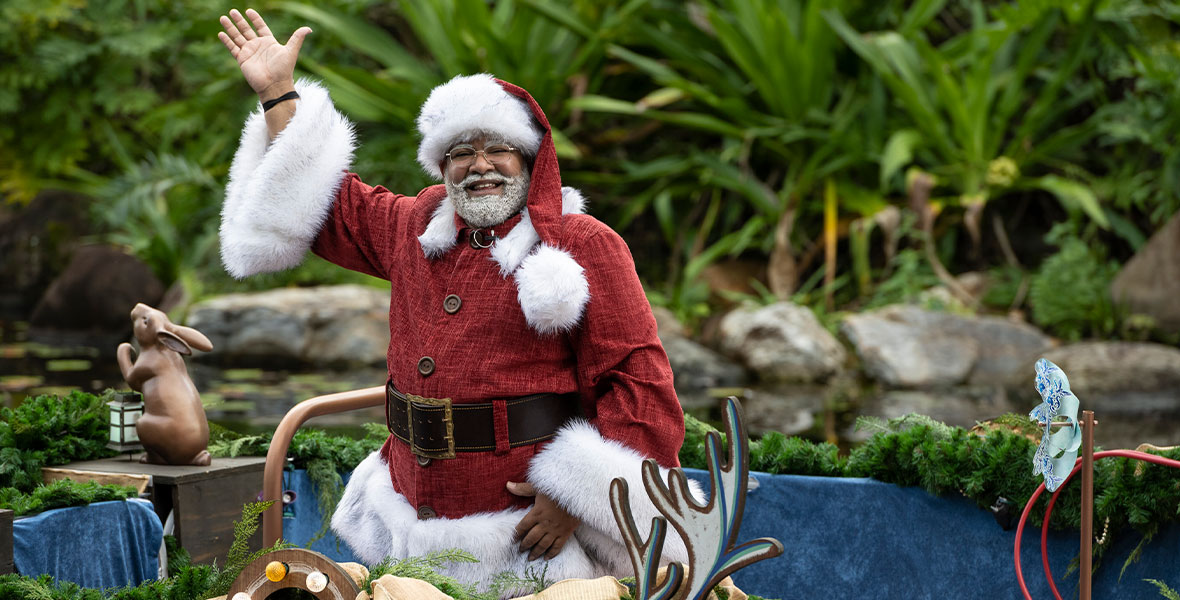 The holiday season will be an especially busy time for Santa as he makes special appearances throughout Walt Disney World Resort. Catch him cruising down Hollywood Boulevard in his red convertible at Disney’s Hollywood Studios during the Santa Claus Merry Motorcade and voyaging across the Discovery River as part of a festive flotilla at Disney’s Animal Kingdom. Santa will continue to spread the joyous spirit of the season during visits to Magic Kingdom and Disney Springs, where guests may have individual time to take photos and share their Christmas wishes. At EPCOT, Santa will join storytellers from around the world as a part of the EPCOT International Festival of the Holidays presented by AdventHealth, which will begin on November 25.

Speaking of EPCOT, the “Candlelight Processional”—a beloved tradition of heartwarming holiday performances at America Gardens Theatre—starts November 25. This season, the Guardians of the Galaxy will trade in their classic hits playlist for a mash-up of seasonal jams at Guardians of the Galaxy: Cosmic Rewind at EPCOT. Blast off to the sounds of an awesome holiday single, bringing joy to Xandar and Terra, too.

In addition, Disney’s Animal Kingdom will come alive with the return of a Merry Menagerie of winter animals realized in the form of life-size, artisan-sculpted puppets. At Disney’s Hollywood Studios, “For the First Time in Forever: A Frozen Sing-Along Celebration,” will add a festive finale featuring everyone’s favorite snowman, Olaf, and celebratory songs of the season. At Disney Springs, guests visiting Town Center will experience a magical snowfall, bringing the spirit of the North Pole to Central Florida.

Find Christmastime cheer in every corner of Walt Disney World with whimsical décor that creates a nostalgic and joyous atmosphere. The merriment extends to the Disney Springs Christmas Tree Stroll presented by AdventHealth, where elaborately themed Christmas trees will draw inspiration from beloved characters; and to resorts, where guests will encounter artisan-made gingerbread creations displayed in select locations. During this season of giving, guests can peruse new dedicated holiday collections at select shopping locations across Walt Disney World Resort, including Disney Springs. 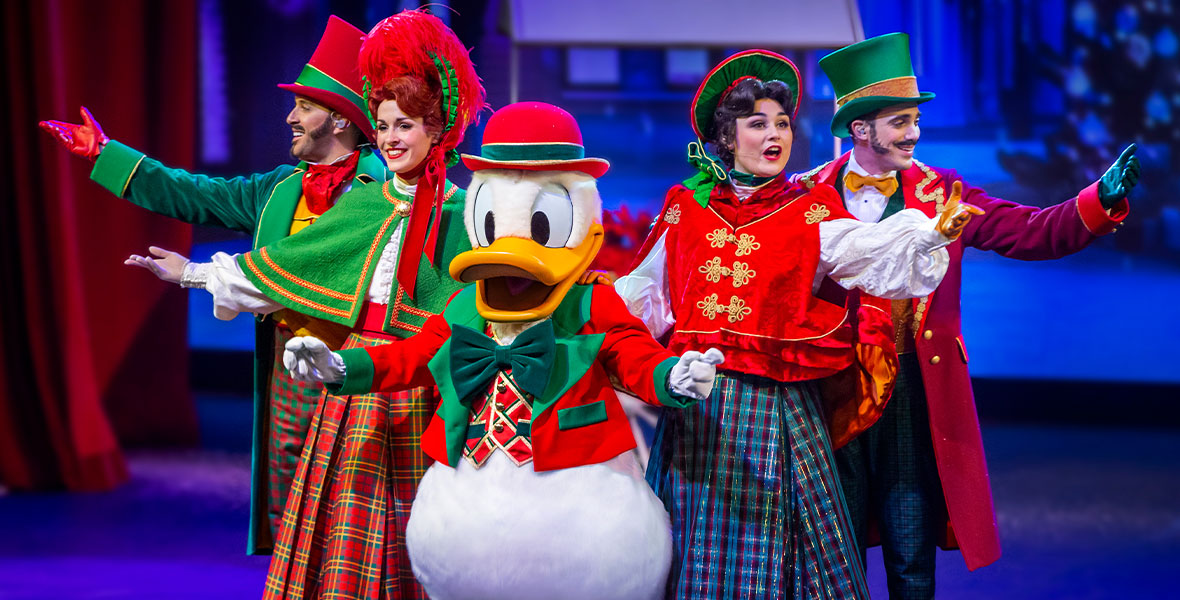 Disney Enchanted Christmas returns from November 12, 2022, through January 8, 2023. This year, the resort’s 30th anniversary celebration will make the holidays shine brighter! It’s sure to be a special time as Disneyland Park transforms with twinkling lights and fairytale decorations lining Main Street, U.S.A., to Sleeping Beauty Castle.

Join Mickey and friends alongside the Disney Princesses and Santa in Mickey’s Dazzling Christmas Paradeduring the day and the nighttime version in the evening. During the parade, they will even make a special stop to dance, sing, and turn on the Christmas tree lights! For even more magic, pose with Disney characters in their holiday best or snap a selfie with Santa before his annual trip around the world begins. Of course, it wouldn’t be the most magical season without a few carols! So, join the Fab Five in the musical show “Let’s Sing Christmas!” at Videopolis in Discoveryland.

Doing holiday shopping? Browse the festively decorated boutiques and visit La Boutique du Château and Merlin l’Enchanteur, which are both dedicated to the season. 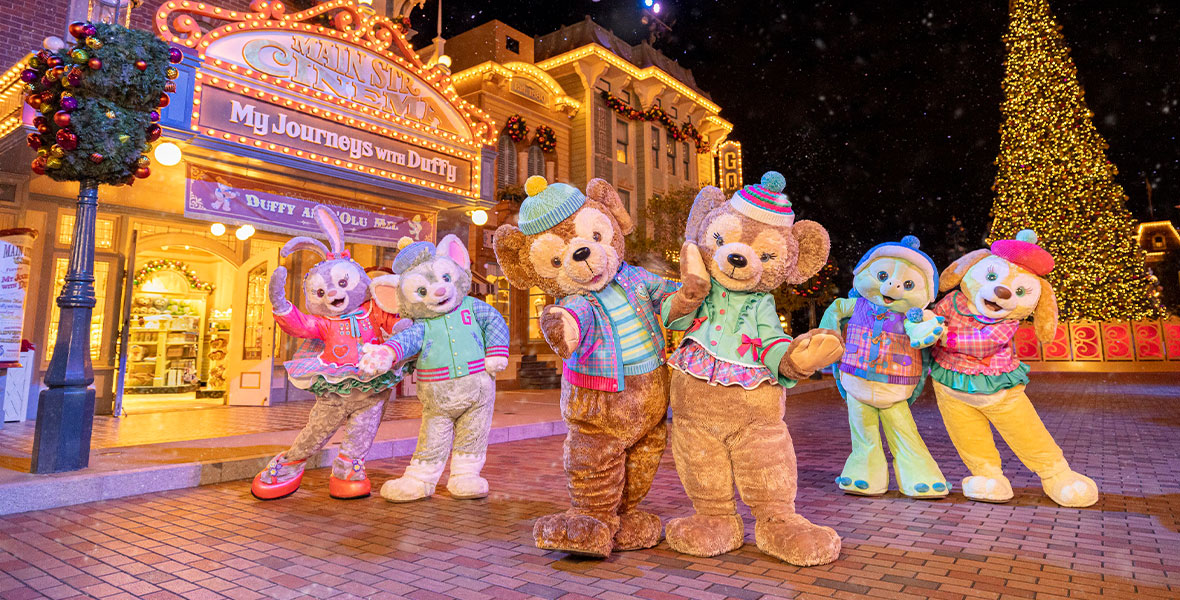 “A Disney Christmas” returns from November 2022 through early January 2023!

Duffy & Friends are ready to welcome guests to their all-new snow-filled paradise “Duffy & Friends Winter Wonderland” at Fantasy Garden. They’ve been wishing for snow… and Hong Kong Disneyland is a place where wishes come true! This wonderland will also serve as the perfect place to grab holiday gifts and festive snacks.

The processionals A Holiday Gift of Cheer with Duffy and Friends and Mickey and Friends Christmastime Ballwill bring jolly music, singing, and dancing to the Castle of Magical Dreams. And, as the sun sets on the winter days, Hong Kong Disneyland will transform with sparkling lights and snow falling from the sky. Joined by his Disney friends, Santa Goofy will headline in the stage show “Santa Goofy’s Magical Snowfall.” At night, enjoy the spectacular “A Holiday Wish-Come-True Tree Lighting Ceremony” returning to Main Street, U.S.A., or experience the new nighttime show Momentous. 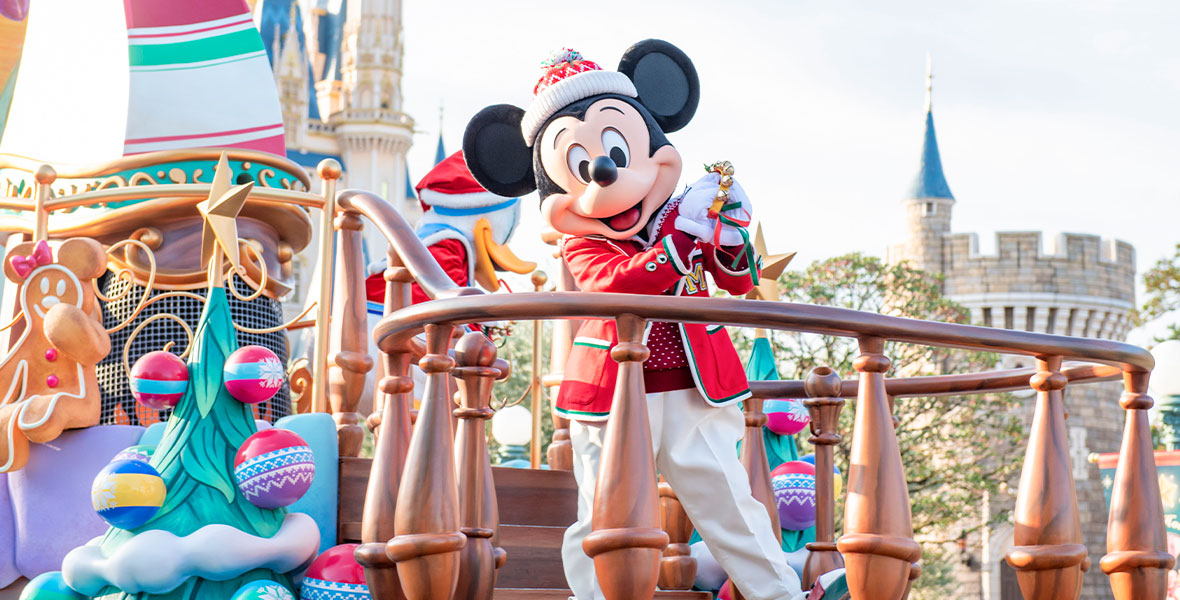 There’s no place quite like Tokyo Disney Resort to celebrate a “Disney Christmas.” Make magical memories from November 8 through December 25 at Tokyo Disneyland and Tokyo DisneySea—and expect more details to be revealed in the coming months!

Can’t wait for the holiday season? Our friends at the Disney Parks Blog are here to help you find holiday ornaments year-round; preview merry merchandise; and much more!

Plus, they’ve also shared a first look at The Santa Clauses, streaming soon on Disney+. Set some time after the events of The Santa Clause 3: The Escape Clause, the series picks up with Scott Calvin on the brink of his 65th birthday. Realizing he can’t be Santa forever, after he suddenly starts to lose his magic, he sets out to find a suitable Santa replacement while preparing his family for a new adventure—south of the North Pole! Tim Allen and Elizabeth Mitchell reprise their roles as Santa Claus (Scott) and Mrs. Claus (Carol). New comers to the cast include Austin Kane as Cal and Elizabeth Allen Dick as Grace, Santa and Mrs. Claus’ children. Kal Penn plays Simon Choski, a single father, ambitious game inventor, and product developer whose visit to the North Pole makes a big impact on his life’s trajectory. In addition, Rupali Redd plays Grace, Simon’s angelic daughter who adores Santa and all things Christmas; Devin Bright plays Noel, Santa’s right-hand elf; and Matilda Lawler plays Betty, Santa’s Chief of Staff.

Wanna get an early start on some delicious holiday-themed eats and treats? Be sure to check out our Halfway to the Holidays foodie guide for a look at what you can sip and savor right now at Disneyland Resort and Walt Disney World Resort!

For more Halfway to the Holidays announcements, visit the Disney Parks Blog.