This story was originally published in the Summer 2010 issue of Disney twenty-three. If you like what you read, become a D23 Gold Member to receive the Disney twenty-three quarterly publication for more fascinating stories about all the worlds of Disney.

Imagine living at Walt Disney World years before construction on the property even began. Here’s the story of the family who did just that, back when the Resort was but a twinkle in Walt’s eye.

The moon casts its spellbinding light into the bedroom window as the sounds of crickets and other swamp bugs resonate through the humid air. Stepping outside onto the back porch, you find yourself hidden in the shadows cast by hundreds of trees in an impenetrable wilderness.

This was no ordinary house, nor an ordinary place. In the years to come, this lonely swath of swampland would become the Walt Disney World Resort. But years before the turrets of Cinderella Castle soared into the infinite blue of the Orlando sky, Philip N. Smith and his family called this place home.

One of the least known and most intriguing chapters of the Walt Disney World story began in 1963, when Smith received a phone call from Hal Butts, a former law school colleague. Butts worked for the Miami-based law firm of Helliwell, Melrose, and DeWolf, and asked Smith if he’d be interested in a new opening at the firm. “I interviewed, and Tom DeWolf offered me a position,” Smith explained. “Instead, I chose to take a position in the General Counsel’s Office of the Panama Canal Company.”

Although he turned down the offer, Smith had impressed DeWolf enough that the law firm flew the University of Miami graduate back from Panama in the fall of 1965 to interview him for a house counsel position. By this time, the firm had bewildered the Sunshine State with its acquisition of thousands of acres of Central Florida swampland for a mystery project. “But they couldn’t tell me who was purchasing the land because they hadn’t made the announcement yet,” Smith remembered.

He returned to Panama with his interest piqued. Attempting to discover who was behind the project, he scoured lawyer directories from northeastern states (not thinking to check California’s.) Then, on a memorable October day, Smith read the now-famous headline in a Florida newspaper, “We Say: ‘Mystery’ Industry Is Disney.” Smith excitedly accepted the Florida position and arrived in Miami on November 8, 1965.

One week later, Walt Disney, his brother Roy, and Governor Haydon Burns came to the newly energized town of Orlando to announce preliminary plans for their yet unnamed Florida project. How would you like to have been Phil Smith that evening, sitting across from Walt at a ceremonial dinner? “It was really a thrill,” Smith said. “Here I was, the new kid on the block, and I’m dining with Walt Disney.”

Although Walt had carefully surveyed the central Florida acreage by low-flying plane, he wouldn’t explore his company’s five-million-dollar purchase by foot until that November visit. With the help of a specially graded road that allowed access to Bay Lake, Walt, Smith, and a band of executives spent hours traversing the vast virgin land that would become the foundation for the creative genius’ most daring visions.

But with hard work came a once-in-a-lifetime opportunity. Just north of Black Lake, on one of the purchased land parcels on the property’s eastern end, was a ranch-style house formerly owned by Carl Bronson, a member of a highly influential Florida family. Walt and his staff stopped to rest on the structure’s front porch during their November visit, but little did Smith expect Bob Foster, the chief architect of Disney’s land acquisition, to invite the young lawyer to live there as its resident counsel.

“He thought it would be a good idea to have somebody located on the property,” Smith recounted. And so in June 1966, the Smiths packed up and moved to the isolated acres that would soon be home to Walt Disney World, which at the time was more like Thoreau’s Walden than any sort of resort destination. “But it was nice for the kids,” Smith continued, “because they certainly had plenty of room to play.”

The Move to Nowhere
How did it feel to move out to the middle of nowhere? “Lonely,” Phil’s wife, Gwen, once said. “Lucky,” Smith countered.

The Smiths’ new home was situated near the eventual site of the Lake Buena Vista Club and what is now Disney’s Saratoga Springs Resort & Spa. Aside from a handful of nearby houses outside the Disney property, the family lived in virtual isolation. “It felt a little strange out there. So absolutely quiet at night. And just as dark as sin,” Smith once described. Shopping and errands would have to be done miles away, in cities like Winter Garden.

The site might also have proved inconvenient for those attending the Smiths’ backyard wedding reception. But it also made for some laughs. “Since it was so far out in the middle of nowhere,” Smith said with a smile, “we posted a sign leading up to the house that read, ‘Would you believe?’ and it pointed in the direction of our home!” Two unlit dirt roads, connecting to the main county road, were the only access points to the sole habitable structure on the 43-square-mile landscape.

At least most of the time. While Smith worked in the Orlando office some 15 miles away, Gwen faced unsettling incidents back home, where she took care of Chris, age 3, and Jeanie, 4. Take, for instance, the old airplane hangar and accompanying airstrip next door: You might imagine how shocked she was when she found the Highway Patrol landing its plane in her backyard.

The Smiths also welcomed a few new family members onto their land. Using a nearby shed as a stall, the family adopted a horse and two Mexican burros from Frank Hubbard, who managed the prominent Hubbard Construction Company. “We used to ride the horse, and every once in a while, one of the burros would get out of the fenced area. We had a heck of a time trying to get it back!” Smith laughed.

Keepers of the Kingdom
Endless expanses of trees. Knee-deep swamps. Fields of orange groves. Stretches of pastureland.  These words only begin to describe the 27,443 acres of rustic land that the Smiths called their backyard. “We used to go to different parts of the property just to see it,” Smith remembered. “And down into the south end, there were some beautiful hummocks with hardwood trees.”

After Disney’s purchase of Riles Island, which was formerly owned by a group of local campers, the Smiths made weekend rowboat trips to picnic in the natural wonderland. If this island sounds familiar, you’ve probably guessed its eventual incarnation: Discovery Island.

Knowing the ins and outs of the landscape better than anyone else, Smith hosted key executives on a property twice the size of Manhattan, throwing back-porch parties and leading wild Jeep rides across the rugged terrain. On one particular Thanksgiving, Donn Tatum, a member of the board of directors and soon-to-be president of Walt Disney Productions, joined the Smiths for a holiday dinner on a float boat on Bay Lake.

But a particularly harrowing experience took place when Smith chauffeured Walt, his wife, Lillian, and a potential CalArts beneficiary from the airport: “At one point, we suddenly hit a low place in the road and all of us bounced off the ceiling of the car,” Smith explained. “It was terrible! There wasn’t much said the rest of the way but later, Joe Potter [who oversaw construction of the property’s infrastructure as vice president of Florida Planning] came up to me and said, ‘I don’t know, but you may be in trouble.’ It was probably one of the worst nights I’ve ever spent.”

The next day, everyone who had heard of the incident kept their distance from Smith. “But when Walt came into the office, he patted me on the shoulder and said, ‘Hey, don’t worry about last night. These other people get more excited about things like that than I do.’” Smith was more than relieved when it came time for Walt to return to the airport: “When we were deciding who would ride with whom, Walt volunteered to ride with me—but the ladies didn’t!”

In later years, Smith worked next to Roy O. Disney’s Florida office in the original Walt Disney World administration building. “Roy was just the nicest, most down-to-earth, fatherly kind of person,” Smith gushed, remembering the time he hosted the Disney leader and his wife, Edna, for dinner. “At one point he gave me a Klaxon for my MG Midget, which he really enjoyed taking rides in.”

Back to the Real World
In November 1968, after two years of calling the Disney property home, the Smiths gave up the best backyard they could ask for and moved to the nearby town of Windermere. Smith continued to head the legal department until 1985, then became Senior Vice President of Administration and Support. The very first Walt Disney World Cast Member retired in December 1992, and made the occasional trip to the old homestead. “It has grown so much,” Smith reflected. “When I go out there anymore, I don’t know where I am half the time… there are so many roads!”

Smith passed away in February 2016 at age 83, after years of cherishing memories of the early days. “I don’t think anyone else—or few people—have gone through what I have, seeing this thing from nothing to what it is now. What an experience!” 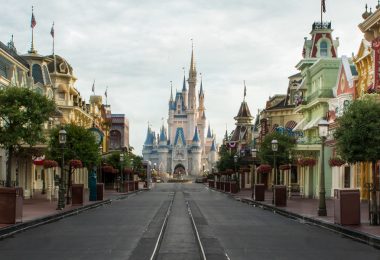